By far the most efficient class of technology for convertingsunlight into electrical power is the high concentration photovoltaic (HCPV).Modules that are based on this technology use low cost lenses or mirrors tofocus sunlight onto multi-junction cells with three or four junctions, torealise conversion efficiencies at the cell level that are nearing 50 percent.Note that the focusing of sunlight by factors of typically 500 to 1,000 iscritical to increasing the bang-per-buck of this technology: it spawns a hikein conversion efficiency, as well as slashing cell costs, due to a dramaticreduction in the amount of compound semiconductor material required to delivera given output.

The commercial success of HCPV has been thwarted by severalfactors, limiting this field to a handful of companies. Arguably the mostdamaging of thorns has been the rampant success of low-cost, large-area solarcell technologies, particularly crystalline silicon. But there are otherissues, such as the requirement for precise two-axis tracking, which adds costand complexity to an installation, while limiting packing density due toshadowing. Another impediment is that it is impossible to focus diffuse lightwith conventional optics, so utility-scale CPV is restricted to desert-likelocations, where the diffuse sunlight fraction is small.

One glimmer of hope is that conventional, large-area siliconsolar panels are now beginning to push firmly against their fundamentalefficiency limits. So, if a large boost in HCPV efficiency came along at lowcost, and were combined with the remarkably high energy yield available fromtwo-axis tracking of the sun, this solar technology could be highly competitiveonce again.

Further cause for optimism is the emergence of myriad nicheapplications where the key requirement is maximising the number of watts persquare meter, rather than the cost per watt. The former metric is the priorityin remote and space-confined applications, such as bicycle and car-chargingstations; in temporary DC microgrids, such as those used for disaster response;and in the application we will focus on in this article - space power.

During the last decade, many CPV companies have closed upshop. But the majority of cell suppliers have not suffered the same fate,thanks to a healthy market for III-V multi-junction solar cells in space. Herethey are the established industry leader, with numerous multi-junction solarcells on the market. Success stems from a different set of priorities:cost-per-watt is a secondary consideration, and topping the list is thespecific power, judged in watts-per-kilogram, and the volumetric power density,evaluated in terms of watts-per-cubic-metre.

Figure 1. (a)-(e) The main features of the micro CPV design,which has been developed by a team that is led by researchers at GeorgeWashington University. Modules incorporating state of the art CPV microcells,all-glass optics and diffuse collection using off-the-shelf crystalline siliconsolar panels. (f) A GaAs-based dual-junction microcell transfer printed on to aglass substrate. (g) A hexagonal array of dual-junction microcells underforward bias, operating as LEDs.

The need for a high specific power reflects the very highlaunch cost for putting anything in space. Regardless of what it is, it costsin the region of $10,000 per kilogram. So, to drive down launch costs, solarcell suppliers try to produce the lightest weight cells possible.

The other key consideration is the volume of the payload. Tominimise this, extremely creative and hi-tech photovoltaic panel deploymentsystems are employed on satellites. They feature low profile modules andlarge-area, III-V multi-junction solar cells with industry leading performance.

Devices that work well on earth may not do so in space, dueto the far higher levels of radiation that degrade material quality and reduceefficiency. To minimise this over the lifetime of the cell, suppliersencapsulate their devices in tens to hundreds of microns of cover glass. Thiscoating shields the semiconductor layers from radiation, but adds significantweight to the final product. 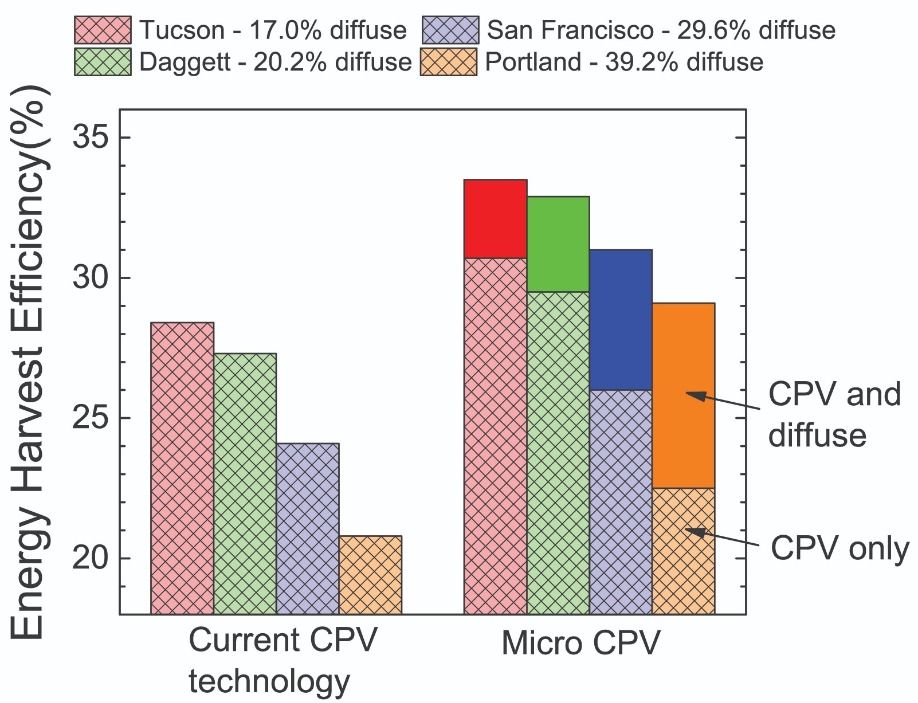 There have been several notable, successful experimentsbased on taking CPV panels into space. These efforts, aimed at exploiting thehigh efficiency of the technology to increase specific power, have focused onlow concentration demonstrations that have failed to gain a strong foothold.But this time it could be different, thanks to the advent of a new type of CPV technology- micro CPV. Its timing could not be much better, given that multi-junctioncells operating at one sun are reaching practical limits for efficiency andspecific power; and the advent of reusable rockets, coupled with largeincreases in space traffic, could drive down launch costs.

Helping to develop a new generation of CPV technology forspace is the US Department of Energy's Advanced Research Projects Agency-Energy(ARPA-E). Through the programme MOSAIC - Micro-scale Optimized Solar-cellArrays with Integrated Concentration - it is funding 11 teams with a total of$24 million.

The efforts that ARPA-E are supporting include those by ourteam at George Washington University, working in partnership with researchersat the US Naval Research Laboratory, Veeco, Northwestern University, MIT andX-Celeprint. Together, our collaboration is aiming to address some of the mainobstacles facing conventional HCPV by marrying ground-breaking,ultra-high-performance five-junction cells with all-glass lens arrays and aglass backplane (see Figure 1 for an overview). Our glass lenses feature anovel, bifacial anti-reflection coating that provides an extremely high opticalefficiency while concentrating sunlight by a factor of approximately 500.

One of the great strengths of our modules is that they cancapture diffuse light, thanks to the incorporation of a bifacial, crystallinesilicon solar panel. Attaching this to the CPV module injects a significantboost to the overall power output, especially in locations where a largefraction of the total solar resource arrives as diffuse illumination (seeFigure 2). 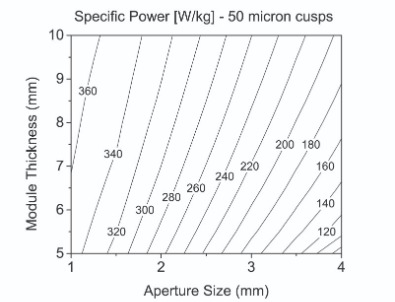 Our micro CPV module is also able to excel in efficiency.The apertures for our CPV cells are just 170 μm by 170 μm, so the devices aresmall enough to avoid the use of metal grid fingers when efficiently extractingcurrent from the cell. Instead, a single metal contact is employed at the edgeof the aperture, eliminating shadowing loss. Another benefit of usingmicroscale cells is that they simplify thermal management. Thanks to this,cells can operate at lower temperatures, thereby churning out power at higherefficiencies.

Micro-transfer printing allows precise, parallel assembly ofmicroscale devices that are removed from their native substrate with a wet etchprocedure. In addition, we use micro transfer printing to heterogeneouslyintegrate dual-junction, GaAs-based solar cells with triple-junction InP-basedsolar cells. The five-junction cells that result - featuring high quality,lattice-matched materials - capture a broad range of the solar spectrum. Dothis at low cost, and it can be disruptive to conventional PV technology.

Our CPV module is well-suited for use in space. Its meritsinclude: a very high radiation tolerance, thanks to shielding by the glass lensarray; a reduced arcing risk between cells, due to their large separation; anda low profile module, enabled by focal lengths of just a few millimetres. Thosedimensions allow units to be drop-in replacements for conventional panels, andbe compatible with existing deployment techniques.

In missions to deep space, it's actually an advantage tooperate multi-junction cells at high concentration. That's because this negatesmany of the difficulties associated with low-temperature, low-intensityenvironments. These issues, which include complications arising fromhetero-barriers and trap states, are encountered on missions to parts of thesolar system much farther from the sun.

Yet another strength of our CPV modules is that they havethe potential to be far cheaper than large-area III-V solar cells. This benefitwill become increasingly important in the future, due to decreasing launchcosts. 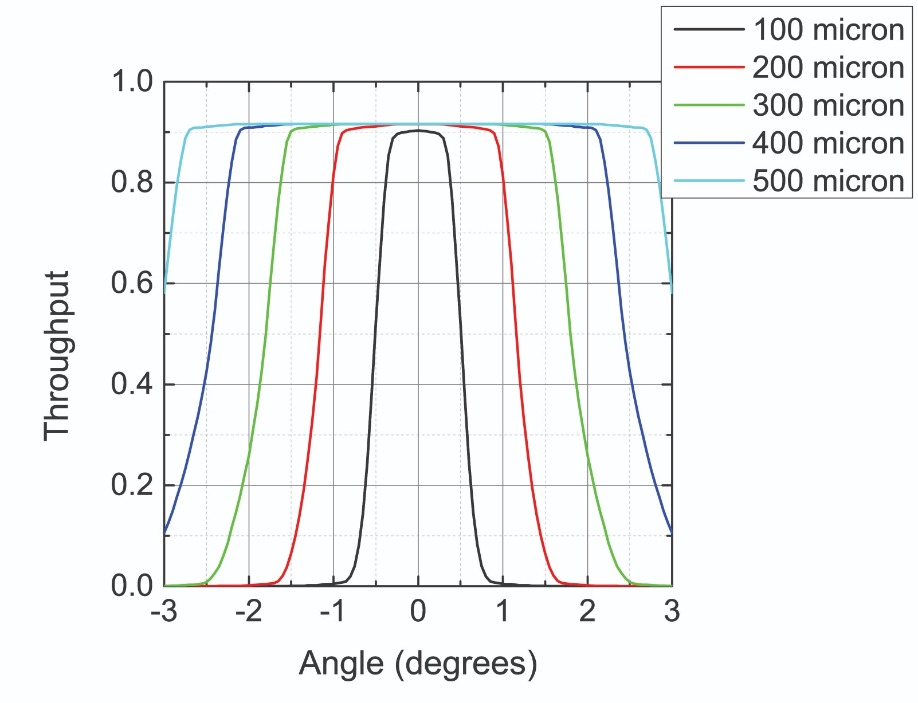 Figure 4. Optical throughput versus incident angle for glasslenses with a 1 mm by 1 mm aperture and 5 mm focal length for differentCPV cell dimensions.

Modelling suggest that the efficiency of our CPV cell inspace peaks at roughly 200 suns. Go any higher and performances falls due totemperature-related losses and series resistance. Note that lower values ofconcentration are used in space than on earth, due to the lack of convectivecooling, which impairs thermal management. A higher cell efficiency does helpthermal management though, as less wasted power is required to be dissipated.

The smaller lenses are compromised by a lower opticalefficiency, due to a ‘cusp' region that extends for about 50 μm along theperimeter of each lenslet. This flaw, resulting from the surface tension ofglass as it cools in the mould, hampers the focusing of light from the cuspregion. However, even with this imperfection and the lower concentration, thesmaller lens yields a higher specific power. That's because these lenses arelighter, thanks to the combination of their smaller apertures, and their lowerlens curvature, due to a longer focal length.

Unfortunately, from the perspective of maximising thevolumetric power density, it is better to use a lens with a shorter focallength. The highest density values coincide with concentrations that correspondto the peak cell efficiency.

This creates a conundrum that is not faced by the designersof conventional flat panel designs, which produce highest specific power whendelivering their highest volumetric power density. However, there is a happymedium for micro-CPV modules in space: small aperture lenses with a short focallength. In future, it may be possible to make even lighter lens arrays usingFresnel lens concepts - this would improve the specific power even more. 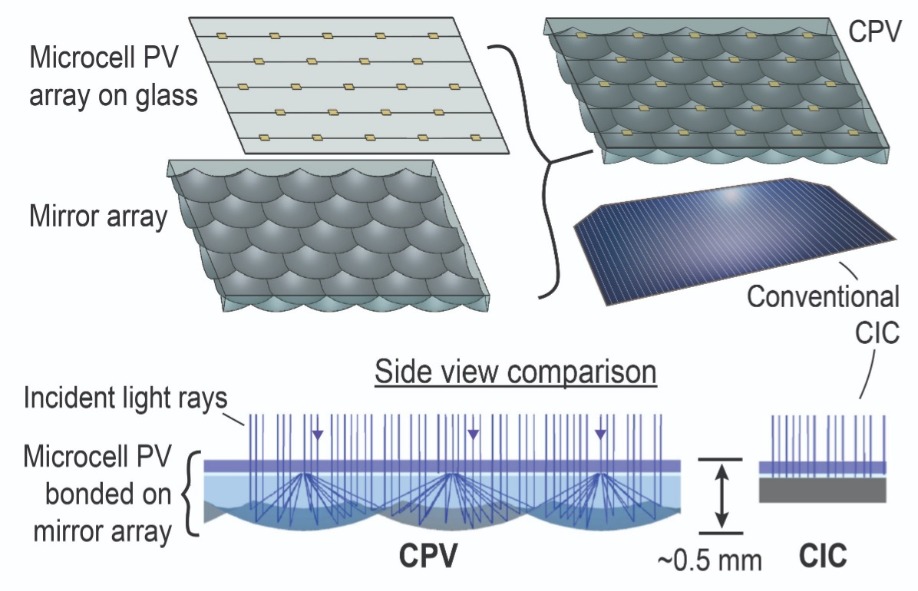 Wherever CPV systems are used, arrays must be pointeddirectly at the sun to maximise power. This is not as daunting to realise inspace as it might first appear, as most satellites can track the sun to withina degree or so, using a variety of attitude control systems. However, thedanger is that if the design employs a narrow acceptance angle, a significantpointing inaccuracy runs the risk of a power outage.

The good news is that it is easy to avoid this scenario,because the economics of space are in our favour. To highlight the way forward,we have considered the optical throughput efficiency for broadband illuminationat varying incident angles, for a 1 mm square lens, 5 mm module thickness and avariety of CPV cell sizes (see Figure 4). This study shows that by oversizingthe cell, a much wider angular acceptance is possible. There are penalties topay, in the form of a slightly reduced cell performance - solar cells generallywork best when uniformly illuminated - and, of course, a higher overall cost,due to an increase in semiconductor content. However, even with those oversizedcells, the cost of the panel is still an order of magnitude lower than anequivalent one with no concentration.

The work described so far considers refractive optics for aspace concentrator system. But that is not the only promising option: there isalso much potential with a reflective concentrator geometry (see Figure 5).Those of us at George Washington University are pursuing this as well, in apartnership with a team at Penn State University, led by Chris Giebink. Modulesare formed by printing microcells on a thin sheet of glass, which issubsequently bonded to a reflective lenslet array.

One of the primary merits of CPV modules with reflectiveoptics is that they enable cells to operate near the thermodynamic limit ofconcentration, while the optics have a far lower aspect ratio - the thickness,divided by the aperture width, may be as low as 0.25. With such a design, masscan reach a new low, while increasing the angular acceptance for a givenconcentration ratio.

For example, for 170 μm by 170 μm cells operating at aconcentration of roughly 35 suns, the total thickness of a practicalconcentrator can be as low as 0.5 mm - that is comparable to the thickness ofexisting coverglass-integrated space PV cells - while the angular acceptancecan be as high as approximately ±5˚.

A practical challenge with this type of module is theextraction of heat from the cells, because they are embedded in low thermalconductivity glass.

This should be manageable, according to thermal modellingand experimental measurements on a similar, terrestrial microcell CPV. However,we can only be certain of this after we have experimentally tested this design.

We have no doubt that micro CPV offers exciting newopportunities for lightweight, low-cost, low-profile CPV arrays that set a newbenchmark for efficiency. Armed with funding from ARPA-E, the new, state of theart CPV modules that we are developing using micro transfer printing promise tohave benefits on earth and up in space.