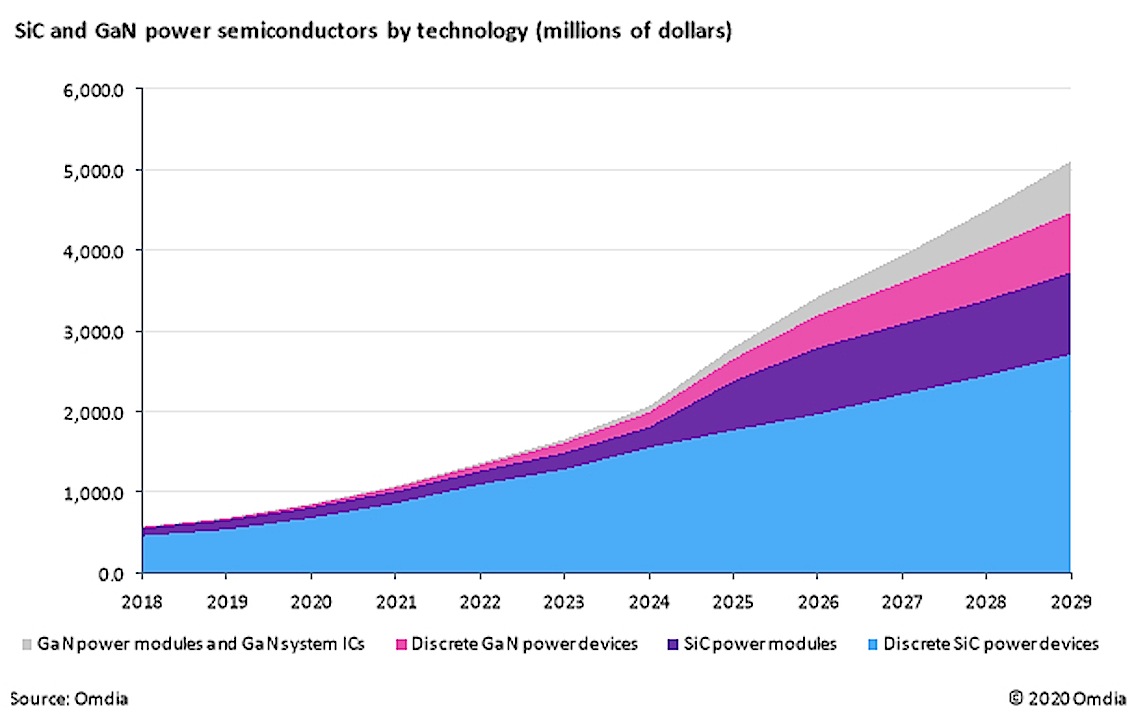 The transition comes as the market reaches a critical size, with revenue forecast to pass $1 billion next year (2021), energised by demand from hybrid & electric vehicles, power supplies, and photovoltaic (PV) inverters, according to Omdia’s SiC & GaN Power Semiconductors Report – 2020.

Early players among the GaN market startups, such as EPC, GaN Systems, Transphorm and VisIC are still going, with some forming alliances with established silicon power semiconductor manufacturers, such as the linkages between Transphorm and Fujitsu, and GaN Systems and Rohm Semiconductor. One reason why few of the original startups have been acquired by the silicon power semiconductor manufacturers may be the emergence of the foundry service providers perfecting production of GaN-on-Si epiwafers and devices, establishing a viable fabless GaN manufacturer market.

There have been fewer mergers and acquisitions (M&A) during the last 12 months. Two M&A developments have come in the SiC power semiconductor industry, both concerning SiC wafer suppliers: STMicroelectronics’ purchase of Norstel Sweden and SK Siltron’s purchase of DuPont's SiC Wafer business, formerly known as Dow Chemicals. It is also worth mentioning is that Global Power Technologies Group changed its name to SemiQ in late 2019.

The SiC substrate wafer supply market is expanding slowly, with many leading players announcing production capacity expansion plans, but wafer prices are not falling fast enough. However, there is not enough competition to the market leader.It is worth noting that Cree (Wolfspeed) has announced several long-term supply agreements with device producers such as Infineon Technologies, STMicroelectronics and ON Semiconductor as well as with automotive suppliers, like Delphi Technologies, Volkswagen Group and ZF Friedrichshafen AG. As well as its agreement with Cree (Wolfspeed), STMicroelectronics also revealed a long-term supply agreement with SiCrystal, which is owned by Rohm Semiconductor, as well as buying wafer supplier Norstel Sweden outright.

Within the GaN substrate wafer supply market, the biggest surprise of 2019 was that Power Integrations was producing GaN system ICs on GaN-on-sapphire substrates while still in stealth mode. Power Integrations acquired Velox Semiconductor in 2010 and used its GaN-on-sapphire research and know-how to create its 'PowiGaN' technology. The company has taken a different approach to competitors by co-packaging GaN switches with silicon driver and protection ICs in its third generation of integrated InnoSwitch devices.

Bulk GaN (or freestanding GaN or GaN-on-GaN) wafers are small and very expensive, but prices are falling as new Chinese suppliers appear, including ETA Research, Sino Nitride and Nanowin. New developers of trench devices on freestanding GaN wafers, like NexGen Power Systems and Odyssey Semiconductor, have appeared, but it will take many years before devices become prevalent.