Navitas Cranks Up the Power with GaN 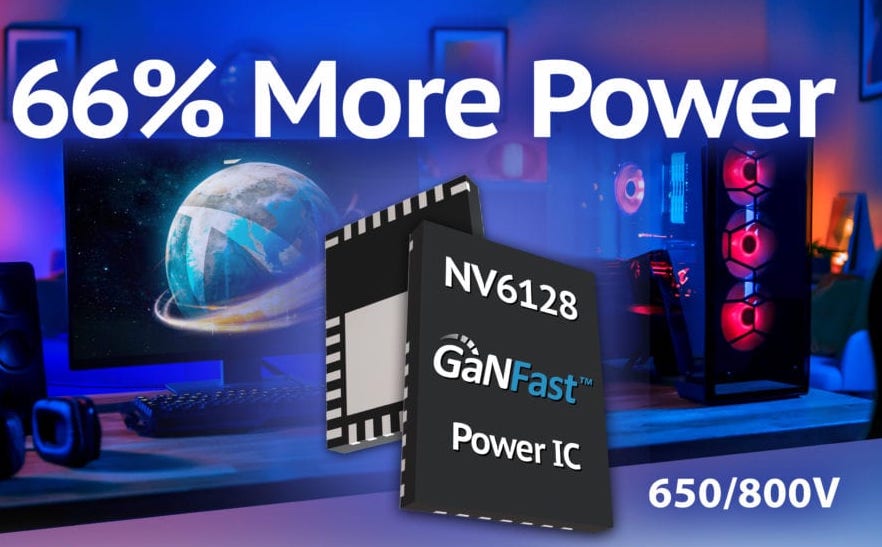 “GaNFast power ICs have been broadly adopted by tier-1 names like Lenovo, Dell, OPPO and Xiaomi for fast-charging mobile adapters up to 200W, with over 13,000,000 shipped and zero failures,” noted Gene Sheridan, Navitas CEO and co-founder. “With the higher-power NV6128, we extended the effective power range to 500W for the consumer market and look beyond that to multi-kW data center, eMobility and new energy applications.”

Unlike competing solutions, the NV6128 is rated at 650V for nominal operation plus a high, 800V peak capability for robust operation during transient events. As a true power IC, the GaN gate is fully protected and the whole device rated at an industry-leading electrostatic discharge (ESD) specification of 2kV.

“It’s a night and day comparison,” said Dan Kinzer, Navitas CTO/COO and co-founder. “Compared to current tier-1 OEM laptop adapters using old silicon in traditional diode rectification and boost PFC topologies at 50-70kHz, the GaNFast NV6128 enables a modern high-speed totem-pole architecture and complete 300W solutions at over 1.1W/cc. That’s up to three times smaller and lighter with existing 200kHz control. When you crank up the speed to MHz+, you get another major step-increase in power density.”

Design-support includes detailed datasheets, electrical models (SPICE), and mechanical models (.stp). The NV6128 is in high-volume, mass production and immediately available from Navitas distribution partners, with a low price of $7.85 at 1k units.