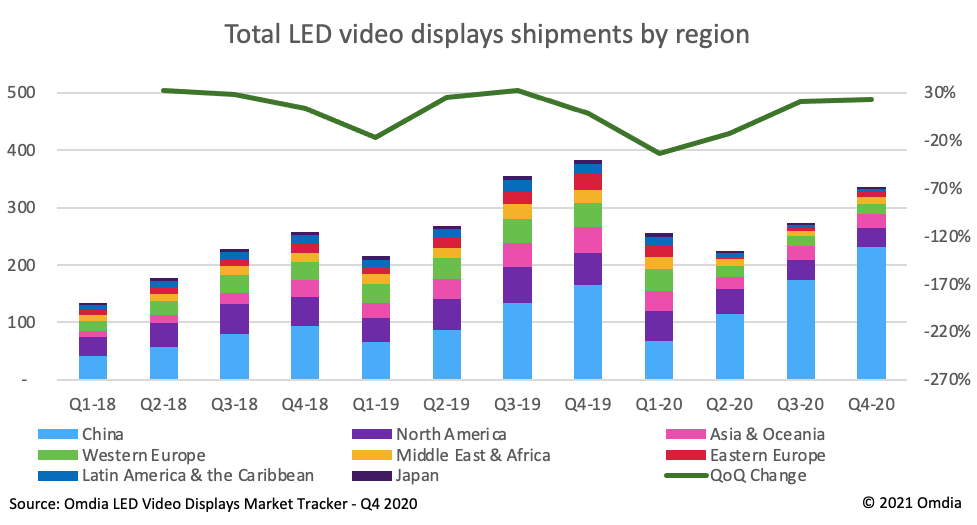 The COVID-19 pandemic significantly impacted the LED video display industry in 2020. However, as the aftermath gradually faded, recovery began in the third quarter and accelerated further in the fourth quarter. In Q4 2020, 336,257 square metres were shipped, with a 23.5 percent quarter-on-quarter growth, accoriding to Omdia's latest LED Video Displays Market Tracker..

The China region demonstrates continued strength due to rapid domestic economic recovery, along with policy support from the government. Additionally, advantages in lead time and price in the supply chain resulted in strong performance for fine pixel pitch categories in control room, command room, and broadcast applications, especially 1.00-1.49mm products. Fine pixel pitch LED video displays seem to compete most often with LCD video walls for projects with a display area of more than 20-30 square meters. On the other hands, major Chinese brands suffered losses on operation costs compared to 2019 because they all targeted enlarging market share in the China region through channel expansion and product line-up securing.

As the United Kingdom and other key EU countries went on lockdown again in Q4, projects cannot be completed on schedule due conflicts between delivery and installation arrangements. Almost all brands presented a milder decrease in Western Europe, compared with the initial lockdown in the first half of 2020. As a result, Western Europe faltered 4.3 percent quarter-over-quarter and 59.8 percent year-on-year in Q4 2020. Compared to other pixel pitch categories, the fine pixel pitch category continued to thrive in corporate indoor, broadcast and control room installations.

Eastern Europe has begun to rebound in Q4 2020 with 95.2 percent quarter-over-quarter growth, but still demonstrates 64.7 percent year-on-year decline. Brands exhibiting strong growth include Absen, Leyard, and LGE with year-on-year growth this quarter of 70.2 percent, 648.6 percent and 29.6 percent respectively. Thanks to AOTO and Leyard, the fine pixel pitch category had significant growth of 225.6 percent quarter-over-quarter.

Omdia defines fine pixel pitch as less than 2.00mm, which reached a record high of 18.7 percent share in the fourth quarter, after declining due to COVID-19 at the beginning of 2020. Chinese LED brands such as Leyard and Absen had positive activities for the pixel pitch category, and they had successful 2020 not only for the specific pixel pitch category but also for overall global revenue perspective.

Leyard took leadership in global revenue market share in 2020. Especially, Leyard alone represented 24.9 percent of global <=0.99mm shipment in Q4 2020, followed by Unilumin and Samsung at 15.1 percent and 14.9 percent share, respectively. In addition, Leyard has averaged above 30 percent unit share in the 1.00-1.49mm pixel pitch category, one of the main categories for fine pixel pitch products since 2018.

Unilumin took the second place in revenue market share with sales strategy change from Q2 2020. Their sales force focused more on overseas market in Q1 2020, but they intensified sales efforts on domestic markets when overseas markets were still affected by COVID-19.

Samsung ranked fourth in overall 2020 revenue, and achieved growth in most regions, except Latin America & the Caribbean. However, if it was specified for <=0.99mm only, Samsung ranked first with 30.6 percent of revenue share, according to Omdia LED Video Displays Market Tracker, Premium – Pivot – History – 4Q20.

Tay Kim, principal analyst, pro AV devices, at Omdia commented: “The recovery of the LED video display market in the fourth quarter of 2020 was driven by China. While other regions have not escaped the effects of the coronavirus, China alone continues to grow, reaching 68.9 percent global unit brand share.”