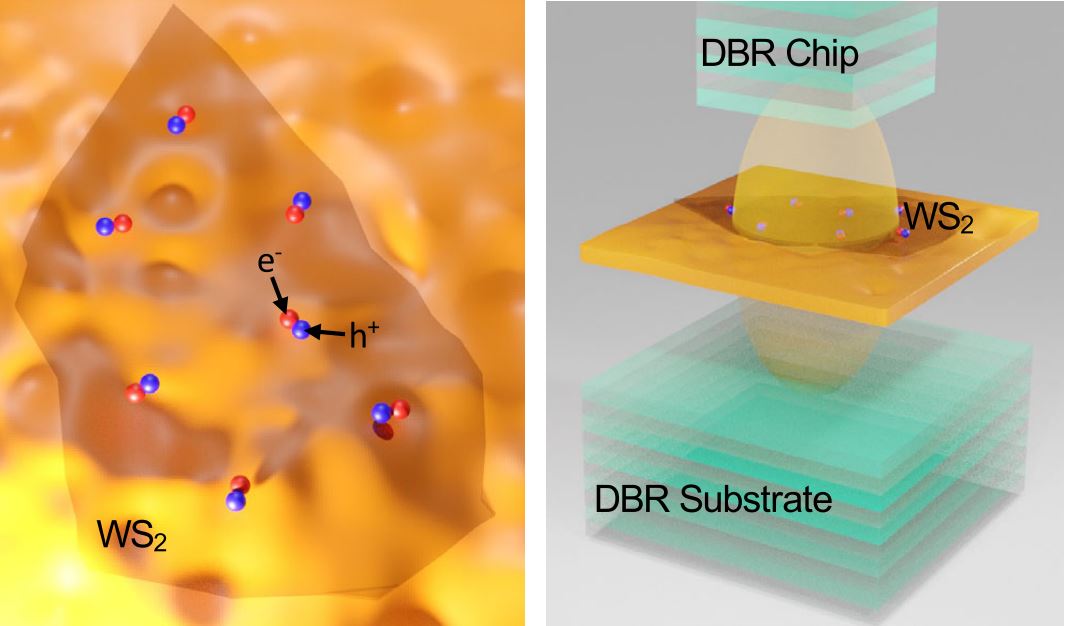 A new ‘sandwich-style’ fabrication process placing a semiconductor only one atom thin between two mirrors has allowed Australian researchers to make a significant step towards ultra-low energy electronics based on the light-matter hybrid particles exciton-polaritons.

The breakthrough, led by the Australian National University, demonstrated robust, dissipationless propagation of an exciton mixed with light bouncing between the high-quality mirrors.

Conventional electronics relies on flowing electrons, or ‘holes’ (the absence of an electron). However, a major field of future electronics focusses instead on use of excitons (an electron bound to a hole) because, in principle, they could flow in a semiconductor without losing energy by forming a collective superfluid state. And excitons in novel, actively studied atomically-thin semiconductors are stable at room temperature.

Because atomically thin semicondctors are so thin, their properties, including the flow of excitons, are strongly affected by disorder or imperfections, which can be introduced during fabrication.

The ANU-led FLEET team—with colleagues at Swinburne University and FLEET Partner institution Wroclaw University—has coupled the excitons in atomically-thin WS2 to light to demonstrate for the first time their long-range propagation without any dissipation of energy, at room temperature.

When an exciton (matter) binds with a photon (light), it forms a new hybrid particle – an exciton-polariton. Trapping light between two parallel high-quality mirrors in an optical microcavity allows this to happen.

In the new study, a new ‘sandwich-style’ fabrication process for the optical microcavity allowed the researchers to minimise damage to the atomically-thin semiconductor and to maximise the interaction between the excitons and the photons. The exciton-polaritons formed in this structure were able to propagate without energy dissipation across tens of micrometres, the typical scale of an electronic microchip.

A high-quality optical microcavity that ensures the longevity of light (photonic) component of exciton-polaritons is the key to these observations.

Picured at the top of the page: Left: Electron-hole pairs in atomically-thin WS2 on a substrate where dielectric disorder is similar size to excitons. Right: Hybridisation of excitons and photons leads to formation of polaritons in an all-dielectric high-Q optical microcavity, reducing effect of dielectric disorder. DBR (Distributed Bragg reflector).

The study found that exciton-polaritons can be made remarkably stable if the microcavity is constructed in a particular way, avoiding damage of the fragile semiconductor sandwiched between the mirrors during fabrication.

“The choice of the atomically-thin material in which the excitons travel is far less important,” says lead and corresponding author Matthias Wurdack.

“We found that construction of that microcavity was the key,” says Matthias, “And while we used WS2 in this particular experiment, we believe any other atomically-thin TMDC material would also work.”

Critically, the team did not deposit the upper mirror structure directly onto the notoriously fragile atomically-thin semiconductor, which is easily damaged during any material deposition process. “Instead, we fabricate the entire top structure separately, and then place it on top of the semiconductor mechanically, like making a sandwich,” says Matthias. “Thus we avoid any damage to the atomically-thin semiconductor, and preserve the properties of its excitons.”

Importantly, the researchers optimised this sandwiching method to make the cavity very short, which maximized the exciton-photon interaction.

“We also benefitted from a bit of serendipity,” say Matthias. “An accident of fabrication that ended up being key to our success!”

The serendipitous ‘accident’ came in the form of an air gap between the two mirrors, making them not strictly parallel. This wedge in the microcavity creates a voltage/potential ‘slope’ for the exciton-polaritons, with the particles moving either up or down the incline.

The researchers discovered that a proportion of exciton-polaritons travel with conservation of total (potential and kinetic) energy, both up and down the incline. Travelling down the slope, they convert their potential energy into equal amount of kinetic energy, and vice versa.

That perfect conservation of total energy means no energy is being lost in heat (due to ‘friction’), which signals ‘ballistic’ or dissipationless transport for polaritons. Even though the polaritons in this study do not form a superfluid, the absence of dissipation is achieved because all scattering processes that lead to energy loss are suppressed.

Apart from creating the potential “slope”, that same fabrication accident created a potential well for exciton-polaritons. This enabled the researchers to catch and accumulate the travelling exciton-polaritons in the well – an essential first step for trapping and guiding them on a microchip.”

Furthermore, the researchers confirmed that exciton-polaritons can propagate in the atomically-thin semiconductor for tens of micrometers (easily far enough for functional electronics), without scattering on material defects. This is in contrast to excitons in these materials, the travel length of which is dramatically reduced by these defects.

Moreover, the exciton-polaritons were able to preserve their intrinsic coherence (correlation between signal at different points in space and time), which bodes well for their potential as information carriers.

“This long-range, coherent transport was achieved at room temperature, which is important for development of practical applications of atomically-thin semiconductors” said Matthias Wurdack.

If future excitonic devices are to be a viable, low-energy alternative to conventional electronic devices, they must be able to operate at room temperature, without the need for energy-intensive cooling.

“In fact, counterintuitively, our calculations show that the propagation length is getting longer at higher temperatures, which is important for technological applications,” said Matthias.