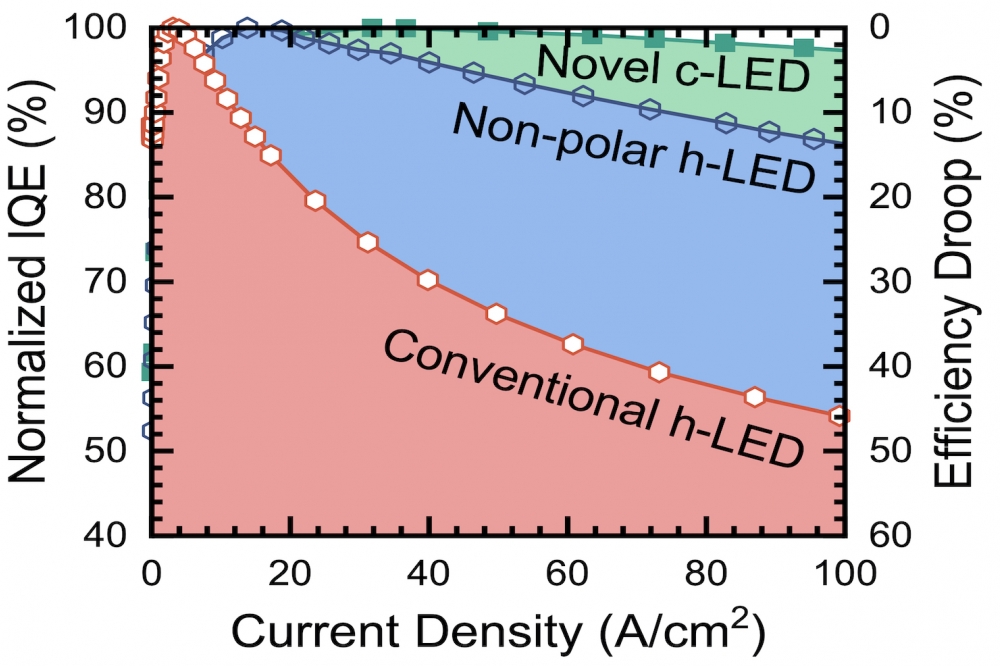 Annually, lighting accounts for 15 percent of global electricity consumption and 5 percent of worldwide greenhouse gas emissions. In the US alone, the transition to solid-state lighting has already reduced lighting-related energy needs and greenhouse gas emissions by approximately 25 percent with respect to non-solid-state lighting (SSL). However, the average household energy consumption for lighting is to triple over the next fifty years due to population growth and an increase in housing size.

And yet, the performance of LED-based SSL is far below its theoretical limit because conventional, hexagonal (h-) InGaAlN multi-quantum well (MQW) LEDs suffer from efficiency rollover under high current density, i.e. efficiency droop. This issue imposes a trade-off between light output power, efficiency, and cost.

In the Journal Applied Physics, Yi-Chia Tsai, Can Bayram, and Jean-Pierre Leburton at the University of Illionois, have provided a detailed computational analysis on the various factors influencing the internal  quantum efficiency (IQE) of InGaAlN MQW-based LEDs as a function of designs and crystallographic structures.

The U of I team's analysis shows that the primary factor for IQE degradation and so called 'efficiency droop' is the internal polarisation arising in strained h-LEDs, which either enhances Auger recombination or carrier leakage from the QWs.

As both effects cannot be averted by modifying the device design alone, their work indicates that switching to novel, cubic phase (c-) LEDs would strongly enhance the IQE peak over 80 percent, while quenching the efficiency droop to just a few percent.