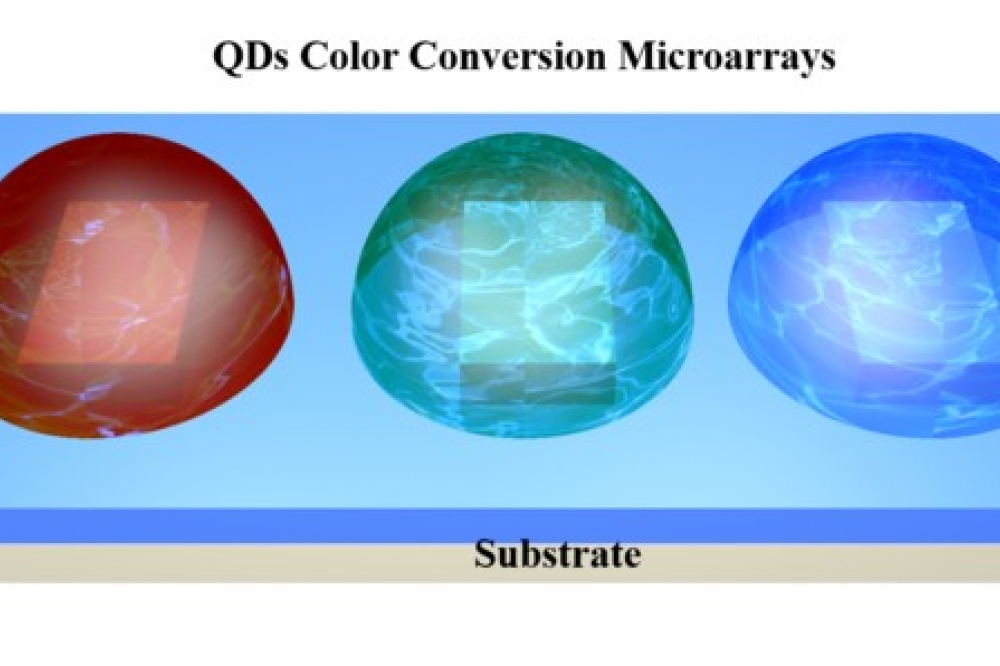 A Chinese research team has developed perovskite quantum dots microarrays with potential for quantum dot colour conversion (QDCC) applications, including photonics integration, micro-LEDs, and near-field displays. The team published their findings on May 31, 2022 in Nano Research.

However, the conventional combination of quantum dots and coffee-ring effects or puddle of particle-laden liquid that occur after evaporation, lowers the light conversion efficiency and emission uniformity in quantum dot microarrays. This also contributes to blue-light leakage or optical crosstalk, where unwanted coupling occurs between signal paths.

Perovskite quantum dots (PQDs) hold potential to resolve some of the problems found in conventional QDCC. By using patterned black photoresist moulds to make the QDs pixels, researchers have been able to increase the pixel thickness and avoid the optical crosstalk, a common but significant issue which prevents better printing results. But manufacturing costs increased substantially.

Inkjet printing is a widely used deposition method for inorganic and organic optoelectronics. With its non-contact, material-efficient and reproducible processing, it has attracted attention in patterned microarrays. Photopolymerisation is a technique that uses light to create a polymer structure. Using the photopolymerisation technique, the researchers achieved a perovskite quantum dot colour conversion microarray with a pixel size of 20 microns. Their technique provides a new technical route for light conversion applications, such as colour conversion micro-LED.

The team say their PQDs microarrays exhibit characteristics that are desirable for QDCC applications, including 3D morphology with hemisphere shape and strong photoluminescence. These microarrays achieved strong and uniform photoluminescence in large area because of the seamless integration with in situ-fabricated PQDs. The researchers' technique demonstrated the potential use of the in situ direct print photopolymerisation method for fabricating patterned multicolour perovskite quantum dots microarrays with both wide colour gamut and high resolution.

Looking ahead, the researchers think this technique paves the way for the further fabrication of full-colour QDCC micro-LED displays.

“The in situ direct print photopolymerisation technique allows for precise control of the pixel structure, removing the aggregation of QDs and coffee-ring effects in microarrays, which will aid in their expansion in photonics integration, full-colour display, on-chip biomedical diagnostics, and next-generation augmented reality and virtual reality devices,” said Yang.