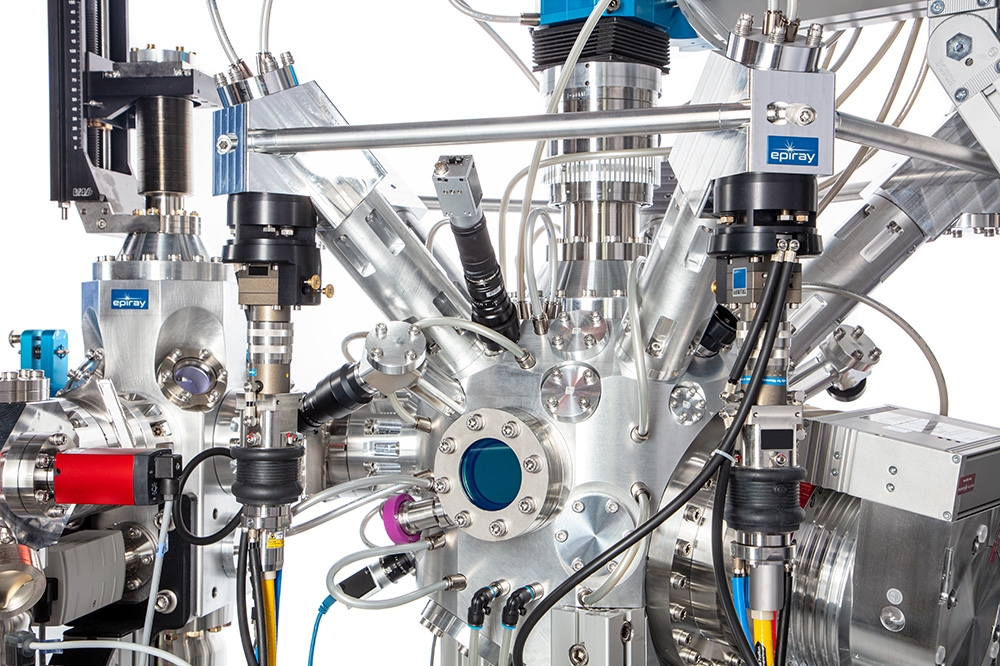 Since its inception, tools for MBE have operated under the same principles – but that could soon change, thanks to the work of epiray, a spin-off of the Max-Planck-Institute for Solid-State Research in Stuttgart. This German start-up is pioneering a radically different approach to heating the sources that enable the growth of epitaxial films. Rather than placing material in a crucible that undergoes resistive heating – or using an electron-beam, if an element has a very low vapour pressure – epiray is advocating an approach that it describes as thermal laser epitaxy (TLE).

As well as the capability to heat elements to incredibly high-temperatures, this technique has many additional merits, according to Hans Boschker, epiray’s CTO.

Boschker explains that during the growth of oxides, the presence of oxygen can cause the resistive heater to burn out. “This limits MBE to very low oxygen pressures, and limits the amount of materials you can grow.”

Turning to the laser-induced evaporation of sources overcomes this restriction. “We are now only limited by intrinsic physics,” remarks Boschker. “We can tremendously increase the materials space we’re working on.”

Another attribute of epiray’s approach is that it is capable of growth rates spanning seven orders of magnitude.

Boschker and co-workers observed this when they investigated growth rates for aluminium. 30 W of laser power is sufficient to melt this element, and growth typically employs 80 W to 100 W, but it can be far, far faster when cranking the power up to 2 kW. Under those conditions, growth rates of 300 nm/s are possible.

epiray’s approach to epitaxy also promises the growth of very pure films. That’s because with conventional MBE, the heating of sources causes the crucible and its surroundings to get hot, contaminate the chamber and threaten to introduce impurities into the epitaxial films.

“We have the exact opposite,” argues Boschker, who points out that with a laser, heating is restricted to just a small proportion of the source material.

He says that this approach also leads to “quite efficient” material consumption, and thus potentially low running costs.

To evaporate materials using the epiray approach, a 1060 nm laser is directed at the sources. “Metals absorb better at shorter wavelengths, so ideally we would use a blue or ultraviolet laser, but those don't exist in high power with the required beam quality,” admits Boschker. So a compromise is adopted, which provides very good control of the optical output power, very high reliability and affordability.

Boschker believes that it makes little sense to begin by using this technique to try and replicate the growth of structures that are well-established by conventional MBE, such as the fabrication of distributed Bragg reflectors, which are formed by pairing many alternating layers of GaAs and AlGaAs. He advocates investigating materials that cannot be produced with the standard form of MBE.

At epiray they are pursuing this approach, looking at a range of materials for power electronics, including silicon carbide and gallium oxide. “Sapphire also looks very promising. Can we get doping into sapphire is a question for the future,” remarks Boschker.

Laser ablation
epiray’s development of its technology is somewhat accidental. After working in the field of MBE for many years, company CEO Wolfgang Braun joined a group specialising in laser ablation, which liberates material from a surface with incredibly short optical pulses that have a high energy density. Braun appreciated the elegance of using lasers to generate a source of material, but wanted to return to the physics of the MBE process, so married the two technologies.

Financed through its own sales, epiray is selling TLE reactors featuring this technology, rather than just sources incorporating laser-based evaporation. At first glance that may seem an odd decision, requiring a more involved approach to getting to market. However, there is a lot of good sense behind this move.

One key consideration is that it’s incredibly challenging to upgrade a conventional system with epiray’s technology, partly due to a lack of space that leads to compromised efficiency. What’s more, traditional MBE reactors use ports from below for the sources, while ports from above are needed to allow the laser to target the source.

Another issue relates to safety. With a high-power laser, it’s imperative that radiation doesn't exit the tool and damage the eyesight of the user. “If you build your own system from scratch you can mitigate this, by essentially not having windows at all,” says Boschker.

The company’s business strategy is to initially focus on selling TLE tools to researchers operating in as many different scientific fields as possible. This will hopefully lead to the use of this growth technology for industrial production.

To support this vision, those that are interested in the technology can begin by spending time within the solid-state quantum electronics department to see how this system works. “Frankly, nobody is spending money on a new technology without seeing it in action,” reasons Boschker, whose understanding of the needs for growers of thin films will surely help the prospects for this technology to redefine what's capable with MBE.


Using a laser to heat sources enables a range of growth rates that span seven orders of magnitude.