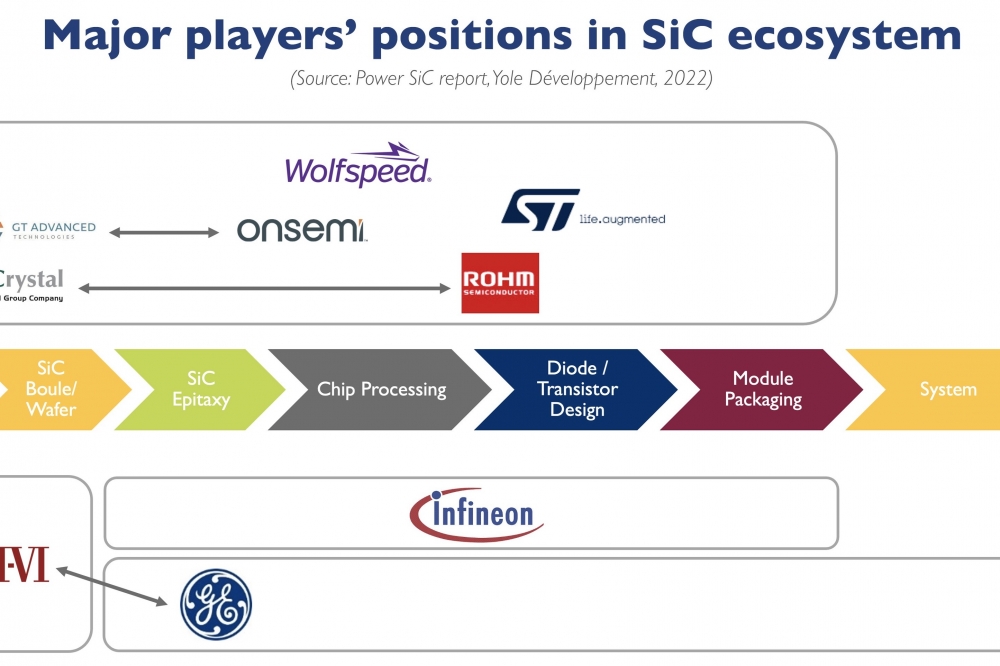 The SiC device market will reach $6.3 billion in 2027, according to Yole Développement's compound Semiconductor team.

Poshun Chiu, technology and market analyst, Compound Semiconductors & Emerging Materials at Yole, comments. “With more 800V EVs coming, SiC is expected to grow quickly. Meanwhile, charging infrastructure and photovoltaics are two markets supporting the EV trend. More chargers are needed to support the increasing volume of EVs, and renewable energy shares the same objective of zero CO2 emission with EVs. These are the markets for SiC to gain more momentum.”

SiC market players are working hard to generate more revenue in this multi-billion-dollar business. Companies including STMicroelectronics, Wolfspeed, Onsemi, and Infineon Technologies, for example, announced their “billion-dollar revenue” objectives. Despite the different paths chosen by each player, the similarity of business model among them can be clearly identified.

The IDM - integrated device manufacturer - business model is the one chosen by leading players to supply devices, especially power modules. This business model represents a higher dollar value to grow the revenue.

STMicroelectronics is the leading SiC company, as its modules have been used in the Tesla Model 3 for some years. Its activities are not only at the device level; and indeed, STMicroelectronics demonstrated its in-house 8 inch SiC wafer in 2021.

Another leading SiC company, Onsemi, took a significant step in 2021 by acquiring GT Advanced Technologies, a SiC boule supplier. Today, Onsemi is working on the expansion of its SiC wafer capacity. Its goal is to support its rapidly growing SiC business.

Meanwhile, Infineon Technologies delivered 126 percent growth of its SiC device business in 2021, outperforming the 57 percent average growth rate. The design-win of the 800V Hyundai Ioniq5 developed by Infineon helped push it into the fast lane.

Peter Friedrichs, VP SiC at Infineon Technologies AG, says: “The efficiency advantage enabled by SiC perfectly matches worldwide efforts to save on electrical energy. The adoption rates will increase, not just in emerging and new applications like solar power conversion or EV charging, but also in traditional power semiconductor applications. We don't need to promote the benefits of the technology anymore; these are really well known in the industry - which is now turning to the question of smart implementation leading to a long-term cost-performance advantage.

Wolfspeed also showed its determination to focus its activities on the SiC business. The company decided on a significant re-organization a few years ago by selling its LED business and expanding its power device business. With its SiC wafer leadership, Wolfspeed has now qualified its 8 inch fab. The company is moving forward and has raised its growth.

Meanwhile, Rohm is expanding capacity in both devices and wafers following its acquisition of SiCrystal a decade ago to integrate vertically. And II-VI shared their long-term view by demonstrating an automotive-qualified 1200V device and an extended partnership with General Electric.

The SiC ecosystem has been reshaped by these major players in the past years. According to Yole, two main trends impact its supply chain: vertical integration of wafer manufacturing and module packaging to gain more revenues in the coming years. In this context, end-system companies, for example, automotive OEMs, are adopting SiC quicker and more flexibly to manage the supply with multiple wafer suppliers in the market…

From the technology development perspective, innovative approaches to SiC wafer are proposed. As of 2022, SiC wafer still accounts for a major part of the cost of a SiC device. According to Amine Allouche, technology and cost analyst at System Plus Consulting, in the SiC Transistor Comparison 2021 report: “SiC raw wafer cost represents more than 60 percent of the epi-wafer cost for 1200V SiC MOSFETs. Even though SiC wafer capacity has been expanding, there is still a strong motivation for innovation in quality, throughput, and cost”.

8 inch SiC wafers are considered as the critical step to scaling up production. The objective is clearly to increase yield and gain advantages in the next round of competition. Major IDMs are developing their own manufacturing capability of 8 inch SiC wafers; already, some wafer suppliers are shipping samples as of 2022.

In Yole's power SiC forecast, 6 inch will still be the leading platform in the coming five years. However, initial volumes of 8 inch are starting in 2022, and it will be taken as a strategic resource by market players.

To optimise the wafering process and thus produce more wafers from one single SiC boule is another approach. Solution suppliers, such as DISCO, have developed the laser cutting system to increase the throughput. And Infineon Technologies has qualified their Cold Split technology.

Thinking ‘out of the box', a few companies have proposed very different ways of manufacturing SiC wafers. Soitec applied their SmartCut™ technology to produce SiC wafer with a thin layer with a lower defect rate and a handle wafer with lower resistivity. A Japanese company, Sumitomo Metal Mining, planned to ramp up its engineered SiC wafer in the coming years. And KISAB, a Swedish start-up, provides wafer-based approaches to offer high-quality SiC wafers. These innovations might accelerate the global development of SiC in the years to come… Further information on i-Micronews.

With a multi-billion-dollar prospect in the coming five years in a strong market mainly pulled by EV applications, SiC is expected to enter more and more applications. To make it happen, ecosystem evolution and innovations are the most critical factors to watch. IDM is the main business model in SiC. In addition, major SiC players are moving all along the supply chain toward the module level. The strategy is to create value. In parallel, innovation never stops. Therefore, new entrants are bringing new approaches to improve scaling, throughput, quality, or cost.