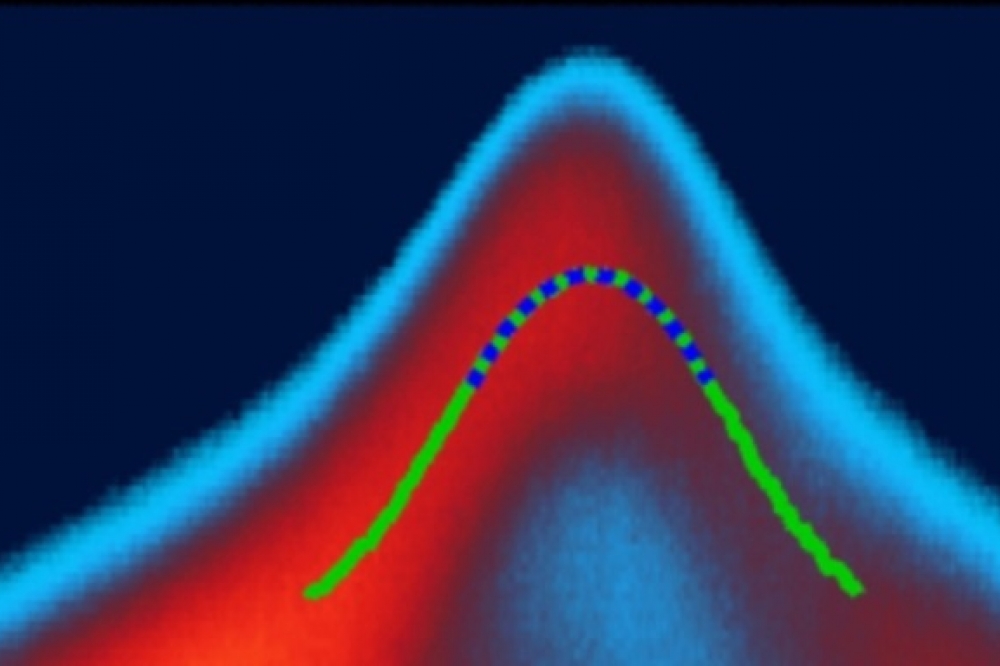 Research on inorganic and hybrid organic lead halide perovskites has been booming for several years. This class of materials has extremely interesting properties: for example, some perovskite semiconductors also convert the energy-rich blue spectrum of sunlight into electrical energy, so that solar cells based on perovskites in tandem with silicon sub-cells now achieve efficiencies of 30 percent.

Perovskite semiconductors are also suitable for LEDs, as semiconductor lasers, and radiation detectors. Unlike conventional semiconductors, these materials can be produced cheaply and with little energy expenditure from solutions to yield thin films.

But even after years of intensive research, the microscopic processes in perovskite semiconductors that ensure superior charge transport are not understood in detail. The only thing that is clear is that the charge carriers that are released in the material by sunlight apparently have long lifetimes and are lost less frequently, for example at defects or through recombination.

In order to explain this behaviour, various hypotheses are circulating, which a team at BESSY II (Helmholtz-Zentrum Berlin's synchrotron radiation source that produces extremely bright X-ray light) has now tested experimentally. The team led by Oliver Rader was advised by perovskite expert HZB's Eva Unger, who also provided the facilities in the HySPRINT laboratory for sample preparation.

One hypothesis is that polarons form in lead halide perovskites and contribute to charge transport. Such polarons are oscillations of ions in the crystal lattice which react to the movement of electrons because of their charge. Since perovskites consist of negative (here lead) and positive ions (here cesium), the assumption that polarons play a role was obvious. Measurements by another group also seemed to support this hypothesis.

At BESSY II, however, this hypothesis can be tested in detail experimentally. With angle-resolved photoemission spectroscopy (ARPES), it is possible to scan the electronic band structures. A weighty share of polarons in the charge transport would become apparent through a higher effective mass. ARPES measures the kinetic energy of the electrons, i.e. 1/2 m v2 with mass m and velocity v. The "tougher" the electron transport, the higher the so-called "effective" mass m. Since the momentum is p=mv, the formula corresponds to a parabola E= (p2)/(2m) which is measured directly in the experiment (see figure above): the larger m, the smaller the curvature of the parabola.

However, the measurements Maryam Sajedi carried out on crystalline samples of CsPbBr3 did not show smaller curvatures, thus refuting the hypothesis of large polarons. "The effective mass we determined from the measurement is not larger than theoretically predicted," says Maryam Sajedi. And Oliver Rader explains: "To make sure that we took into account all possible effects other than polarons, for example the repulsion of the electrons from one another, we worked together with theoreticians from Forschungszentrum Jülich. However, there is no increased mass in the experiment for which one would have to postulate polarons."

The second hypothesis assumes a giant Rashba effect to limit the losses due to recombination of charge carriers. The Rashba effect is based on a strong spin-orbit coupling that could be produced in lead-halide perovskites by the heavy metal lead. Again, earlier work pointed to this effect as a possible explanation for the long lifetimes of the charge carriers. Maryam Sajedi examined samples of both inorganic CsPbBr3 and hybrid-organic MAPbBr3 with spin ARPES and analysed the measurement data. "This effect is at least a hundred times smaller than assumed," she comments on the result.

"We have been able to experimentally disprove two common hypotheses about the transport properties in perovskites, which is an important result," says Rader. The elimination of invalid hypotheses is very helpful for the further optimisation of those materials.

'Is There a Polaron Signature in Angle-Resolved Photoemission of CsPbBr3?' by Maryam Sajedi et al; Phys. Rev. Lett. 128, 29 April 2022