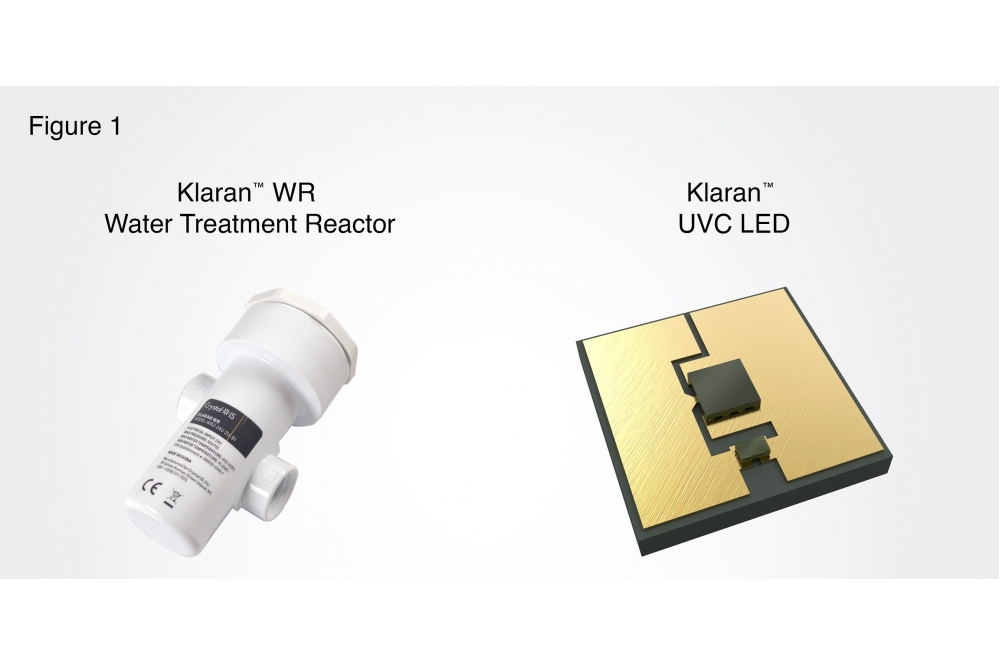 Klaran WR is an inline Point of Use (PoU) water treatment reactor (Fig. 1, left) which combines Crystal IS’ UVC LEDs based on aluminum nitride (AlN) substrates (Fig. 1, right), with Asahi Kasei’s R&D capability in the design and application of optics and fluid-dynamics.

While conventional UV water treatment systems have used mercury lamps as a light source, nations around the world adopted stricter regulations after the Minamata Convention on Mercury became effective in 2017, due to the hazards that mercury poses to health and the environment. UVC LEDs have been developed as a mercury-free light source featuring small size, light weight, and flexibility in design. A key milestone speeding the transition to this modern light source is demonstrating that the disinfection performance, power efficiency and value of the new LED technology can fully meet or exceed the incumbent mercury lamp.

While it is widely understood and accepted that UVC LED’s instant on-off capability offers a significant advantage and better alignment with actual consumer use than an “always on” mercury lamp system, a question remained whether an equivalent powered LED system could demonstrate equivalent disinfection performance as a low-pressure mercury lamp system. The experimental Klaran WR reactor was developed to demonstrate that UVC LEDs can achieve just this.

A standard Klaran WR was enhanced and modified to operate with the same power consumption level (6 W) as a comparable mercury lamp system. Both systems were tested using water at a flow rate of 8 litres per minute (2.1 gallons per minute), with a UV transmittance of 97 percent at 265 nm and dosed with the addition of approximately 106 CFU/mL of E. coli, a common gram-negative, facultative anaerobic, rod-shaped bacteria, for testing.

As there is no established testing method for this type of comparison, Asahi Kasei devised the testing method and contracted an independent laboratory to perform the evaluation. Water quality samples recorded after 2 minutes steady operation with both systems were compared (see graph above), demonstrating how the Klaran WR had over 2 LRV (logarithmic reduction value) better performance than the mercury lamp system. Put another way, the Klaran WR system reduced E. Coli in the water to 1/100 of the level of the water disinfected by the mercury lamp system.

It is Asahi Kasei’s belief that by replacing mercury lamps in water treatment systems with Crystal IS UVC LEDs, it will contribute to the realization of a mercury-free world and meet the global need for energy efficiency and safer water. In addition to water treatment system, Crystal IS will apply the various advantages of UVC LEDs to expand the application of UVC LEDs in surface and air disinfection