Powerful blue lasers are ideal for welding copper, because they hit the sweet spot for light absorption


The largest market segment for the laser is materials processing. Used in this manner, it can serve in various industries, thanks to its capability to provide unmatched flexibility, power, and ease of integration on the factory floor (see box Lasers for materials processing). However, there has been one significant industrial application where the laser has not been able to succeed: copper material fabrication.

Addressing this omission is our team from Nuburu of Centennial, CO. We have produced a game-changing, high-power, industrial blue laser with unprecedented performance in copper processing applications. Our range of products began with the launch, in 2017 of the AO-150, a 150 W, 450 nm laser source, and late last year we followed this by up by introducing the 500 W AO-500.

Lasers have been proving themselves as robust, reliable tools for materials processing for many years. However, these sources have not been effective on reflective - so called ‘yellow' - metals (see box The physics of blue light welding).

That impediment should not come as a big surprise - the poor performance is based directly on fundamental physics, rather than any deficiencies in the technology. What's needed is to maintain the performance of the laser, while shifting its emission from longer wavelengths to the blue. And to do that, two developments are required: laser gain media that are efficient in the blue; and innovative design, which effectively combines independent sources to reach the required high power levels.

It is the advances in consumer electronics and general illumination that have pushed the development of blue diode lasers, which are based on GaN and its related alloys. A single diode laser typically provides only two or three watts, so to boost output, multi-die packages are put together that combine many individual diodes. The challenge is to unite the individual emitters in a manner that maintains a high beam quality while retaining optical power.

Our approach is to draw together the output of twenty diodes, packaging them in a two-dimensional five-by-four array. This is far from trivial. Each diode has an asymmetric output, with a high-divergence ‘fast axis' and a lower-divergence ‘slow axis.' So, we begin by producing symmetric beams. This task cannot be accomplished with a single monolithic optical element. Instead, we use micro-optics, a solution that employs individual actively aligned fast-axis and slow-axis collimating lenses. The result is 20 highly parallel beamlets from each 20-diode package.

Each of these packages delivers an output of 50 W. So, to realise an industrially useful output power, we combine four of the 20-diode packages. To avoid unavoidable losses from traditional beam-splitters, these beamlet arrays are brought together with a series of interleaving mirrors. This creates a 5 by 16 array of spatially separated beamlets (see Figure 1(a)).

A cylindrical telescope ensures a circular beam profile for the output beams, which can be focussed to a single spot to produce an independent laser system with a nominal output of 200 W. That's essentially a description of our AO-150 - our first product release (our design is shown in Figure 1(b)).

Figure 1. The optical design of a 200 W module. (a) above, Beamlets from four individual multi-chip packages are combined to create a single 5-by-16 output array. (b) below, A ray optics model of a complete 200 W module. 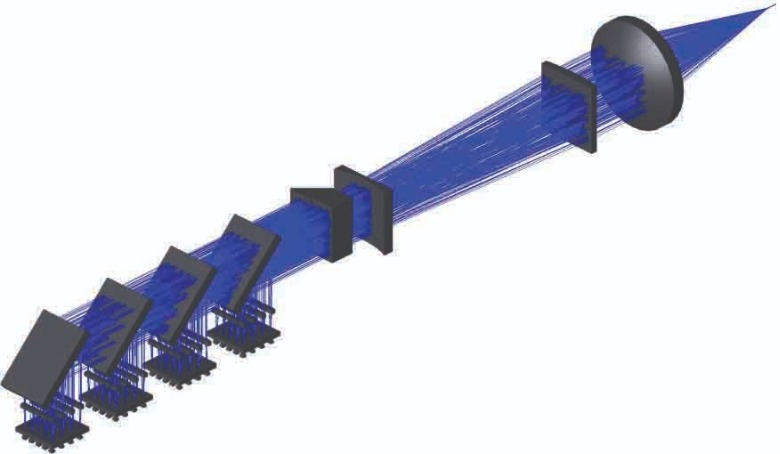 Our AO-150 has demonstrated the qualitative and quantitative advantages of using blue light for copper welding. In addition, it has confirmed the need for a higher output version.

Building on the success of our AO-150, we developed the AO-500. This 500 W, 450 nm source, which is a modular design that combines four 200 W modules, is able to expand the range of needs that can be addressed with a blue laser.

Once again, if the outputs were combined with traditional beam-splitters, too much energy would be lost. So, instead, four output modules are combined with a series of mirrors and a polarizing cube. Then finally, we aspheric lens focuses 320 beamlets into an optical fibre with a 400 µm diameter.

Using this fibre ensures that the AO-500 is not only a powerful blue light source - it's also a bright blue light source. That's a very valuable attribute, because high brightness is the key criteria for many materials processing applications (see box The importance of brightness).

We have paid a great deal of attention to the optical design of our products. This reaps reward, enabling a coupling efficiency of more than 90 percent into the optical fibre. But optimal performance in the lab doesn't guarantee the reliability and robustness required for sufficient performance on the factory floor.

Figure 2. Four separate 200 W modules are combined with mirrors and a polarising cube. 320 beamlets are focussed through an aspheric lens into a 400 µm-diameter optical fibre.

From lab to factory

Thermal management is critical for all high-power systems. That includes optical systems, where it is crucial, because the heat load is concentrated at locations distributed throughout the system. The diode arrays are sources of heat, actively cooled with a distilled water/anti-corrosive mixture. Meanwhile, the optical fibre is a robust, quartz block-head design, capable of carrying kilowatts of optical power. By coupling more than 90 percent of the output into the fibre, the thermal load on the cladding-mode stripper is minimised. The implication is that the thermal equilibrium of the system is easily maintained, far from damage thresholds, leading to high stability and low-power degradation.

One of the strengths of the four merged 200 W modules is the significant power margin. Measurements of output power stability demonstrate a reduction of less than 3 percent per thousand hours of operational cycling. This power margin, combined with the stability, holds the key to high reliability. Even so, every system eventually reaches the end of its useful life, which is why we build field maintenance right into our design. 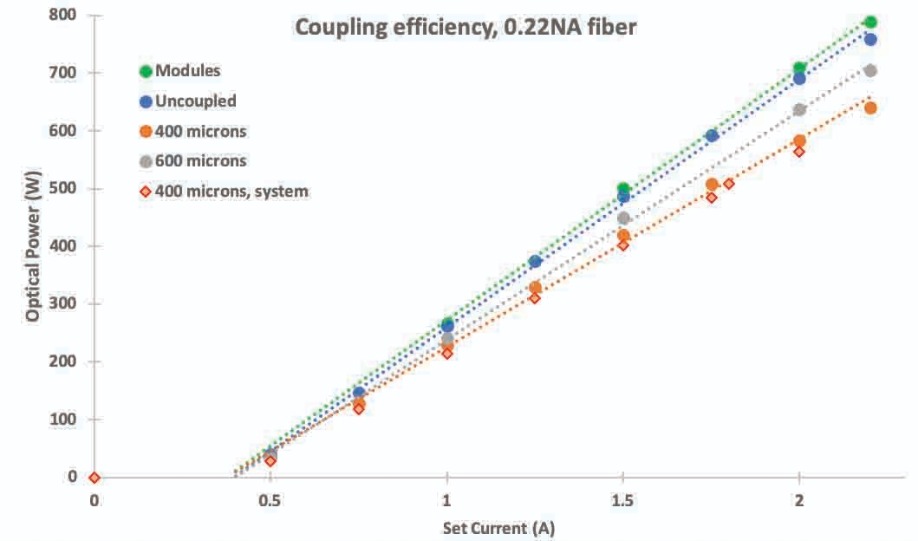 Figure 3. The AO-500 system reliability. (a) The output power of the modules, demonstrating the high efficiency of power coupling at each level of integration. Each 200 W module of our AO-500 is field replaceable, using kinematic mounting points to eliminate the requirement for optical realignment. In addition, the optical fibre can be replaced. According to laboratory testing of our module and fibre replacement, power variation is less than one percent.

With innovative design established and design reliability and robustness assured, our next step is to translate the physical advantage of blue laser absorption into specific process parameters for various copper welding tasks. Material interaction may be influenced by weld speed, illumination pattern, energy density, and whether the source is operated in continuous mode or in a pulsed fashion. Working with various industrial partners, we have optimised the process parameters for different copper welds. Some of these are difficult to accomplish with other welding techniques, while others are impossible.

The capabilities of our laser include conduction welds, keyhole welds, butt welds and hairpin welds (see Figure 4). These joints, which are essentially void- and spatter-free, are produced at rates well above those of alternative methods.


Figure 4. Blue laser copper welds, all void- and spatter-free. (a) A conduction mode weld. (b) A keyhole mode weld. (c) A butt weld for a bussbar. (d) A hairpin weld, as required for an ultra-compact electric motor assembly. Note that (c) and (d) are essentially impossible with alternative weld methods. These unprecedented quantitative and qualitative advantages associated with our blue lasers have already led several key battery, consumer electronics, and electric motor manufacturers to incorporate welding with these sources into their processes.

We continue to perform tests to determine the welding parameters appropriate for specific assembly geometries. Efforts are directed at developing higher power, higher brightness sources, opening up new prospects for applications in a wider range of industries.

Materials processing requires the transfer of energy from a source to an object. This can be accomplished by transferring: thermal energy from a flame, so that it joins two materials; chemical energy from an etchant to a create a surface pattern; and mechanical energy from a bandsaw to cut a material. Yet another option is to use a laser for energy transfer.

With a laser, electromagnetic energy is transferred into a material. That leads to a significant advantage over all the other energy delivery methods: in this case, energy is delivered at a distance, using a non-contact transfer mechanism. With the alternative approaches, which all require some kind of contact, one consequence is a limit to the possible geometries. In contrast, laser energy can be precisely delivered to almost arbitrarily small regions in configurations that are inaccessible to alternate methods of materials processing.

When working with a laser, energy is delivered through some combination of mirrors, lenses, and fibre optics, depending upon the specific application. All of these options can be packaged in compact, lightweight assemblies. This means that the lasers can be easily integrated into automated materials processing operations.

Laser welding begins when light is absorbed by a material and converted into heat. The energy density delivered at the metal surface governs which of the three types of weld are created: a conduction weld, a keyhole weld, or ‘transition-mode' weld. A conduction-mode weld occurs when the laser delivers energy to the surface, forming a wide, essentially symmetric shallow weld nugget, through conduction of heat from surface absorption. Keyhole-mode welding results from absorption at a higher energy density. The laser light creates a thin pencil through the material - a ‘keyhole' - opening a path for laser energy to be delivered directly to the full thickness of the material. A melt pool is produced in the wake of the laser's path. The third type of weld, the transition mode, is, as its name suggests, an intermediate state between conduction and keyhole welding.

The Achilles heel of the traditional industrial laser is its wavelength. Depending on its type, it either emits in the neighbourhood of 10 µm or at around 1 µm. That's far from ideal for processing ‘yellow metals', such as copper, because they have very weak absorption in this spectral range.

That poor absorption prevents conventional industrial lasers from delivering conduction-mode welding. Keyhole welding is possible, but only by delivering significant excess energy to the target area. Once the melt pool is formed, however, material absorption is far higher.

One way to try and minimise these problems is to modify the illumination pattern. This can be accomplish by ‘wobbling', which involves irradiating the surface in a spiral-like pattern to moderate the energy delivery. But this approach is far from ideal, as it reduces the weld speed and fails to eliminate voids and spatter.

In practice, those that are welding copper with infrared lasers are forced to walk a narrow path, making sure that they supply enough energy to ensure a weld, but not too much, to prevent the weld from degrading. That means that there is a very narrow process window to produce any kind of weld - and sometimes there is no process window at all.

Switching the light source from infrared to blue changes everything, thanks to a ten-fold hike in absorption. With a blue laser, conduction mode welding is possible. Welding is also far easier, because both the base copper and the melt pool absorb about two-thirds of the incident blue light. Although this absorption changes with temperature, it does so in a smooth manner. This means that the process remains under very tight control at every stage, with a wide process window. The upshot is high-speed welding that's free from voids and defects - a performance that can't be matched with any other welding technology.