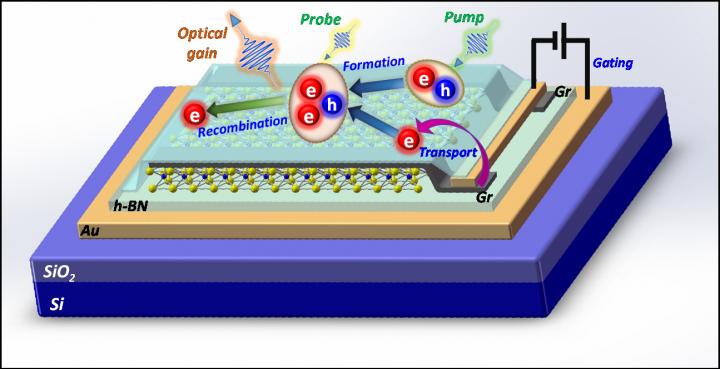 In a new paper published in Light Science & Application, researchers from Tsinghua University and Arizona State University report their results on studying the fundamental physics of excitons, trions, and related complexes.

Excitons are quasi-particles formed by an electron and a void called hole left when an electron is excited in a semiconductor. Such an exciton can be charged, to form a so called trion when it further binds with another electron or a hole.

The team discovered an interesting process that gives optical gain, a prerequisite for signal amplification or lasing in a semiconductor, by exploring the intricate balance and conversion of excitons, electrons, holes, and trions. Interestingly the required level of input power to realise such optical gain is extremely low, 4 to 5 orders of magnitude lower than in a conventional semiconductor such as GaAs or InP, which are the workhorse materials for optoelectronic devices currently.

(The image above shows trion optical gain mechanism in electrically gated 2D materials. Exciton produced by a pump laser combined to form a trion. A weak probe light bounces off the trion gets amplified by emitting a photon and an electron.)

The distribution of these exciton-related complexes and their dynamical mutual conversion are at the very heart of solid state physics for many decades. There are still unresolved issues as to how these excitons form more complex particles and eventually transform into an ionised conducting phase of charged particles as we introduce more and more of them into a semiconductor. This process is called the Mott transition, after Sir Nevill Francis Mott, the celebrated British Nobel winning physicist.

Conventional theory for the occurrence of optical gain says that free excitons cannot produce optical gain before the Mott transition in a semiconductor with freely moving charges. Optical gain occurs after electron density exceeds the so-called Mott density, typically a very high level of density on the orders of trillions of particles per centimetre squared. Such an extremely high density requires a high level of injection of electrical current, or electrical power. Most of our current semiconductor lasers that power our internet, data centres, and many other applications are based on such semiconductors.

Exploring the relationship between occurrence of optical gain and Mott transition, especially searching for new mechanisms of optical gain at low densities before the Mott transition is thus not only an issue of fundamental importance in solid state physics, it is also of importance in device applications in photonics. If optical gain can be achieved with excitonic complexes below the Mott transition at low levels of power input, future amplifiers and lasers could be made that would require small amount of driving power. This is obviously of great current interest for energy efficient photonic devices or green photonics. But unfortunately, such issues could not be fully and systematically explored in a conventional semiconductor, because excitons themselves are not very stable and the chance of pursuing higher excitonic complexes is limited.

The recent emergence of atomically thin layered materials made such study possible and more meaningful. These materials comprise of only a few layers of atoms. Because of the thinness of the materials, electrons and holes attract each other 100s times stronger than in conventional semiconductors. Such strong charge interactions make excitons and trions very stable even at room temperature. This was the reason why the authors could explore such intricate balance and carefully control their mutual conversion to achieve optical gain.

By creating excitons through optical pumping by a laser, excitons form trions with part of electrons whose number is controlled by a gate voltage. When more electrons are in the trion state than electron state, a condition called population inversion occurs. More photons can be emitted than absorbed, leading to a process called stimulated emission and optical amplification or gain.

"Another motivation for this study was the apparent contradiction between a few high profile experiments in the field in recent years. There have been a few experiments reporting laser demonstrations using 2D materials as gain media. There lasers required very low level of pumping when excitons are dominant light emission mechanism. But the only existing experiment that proved the existence of optical gain in such materials requires much higher level of pumping", said Ning, who leads the research team.

"We have systematically pursued this issue experimentally for 2-3 years. We bounced a beam of light of a broad spectrum off 2D molybdenum ditelluride and carefully watch if the reflected signal is larger or smaller than the incident beam to look for any sign of light amplification," said Hao Sun, who is a lead author of this paper in charge of optical measurement.

"To be sure, similar trion gain experiment was conducted in 1990s with conventional semiconductors", noticed Ning. "But the excitons and trions were so unstable, both experimental observation and, especially, utilisation of this optical gain for real devices are extremely difficult." "Since the excitons and trions are much more stable in the 2D materials, there are new opportunities to make real-world devices out of this observation", pointed out Ning. "For the moment, this result belongs to basic physics research, but as for all the important observations in semiconductors, they could eventually be applied to making real lasers," commented Ning.