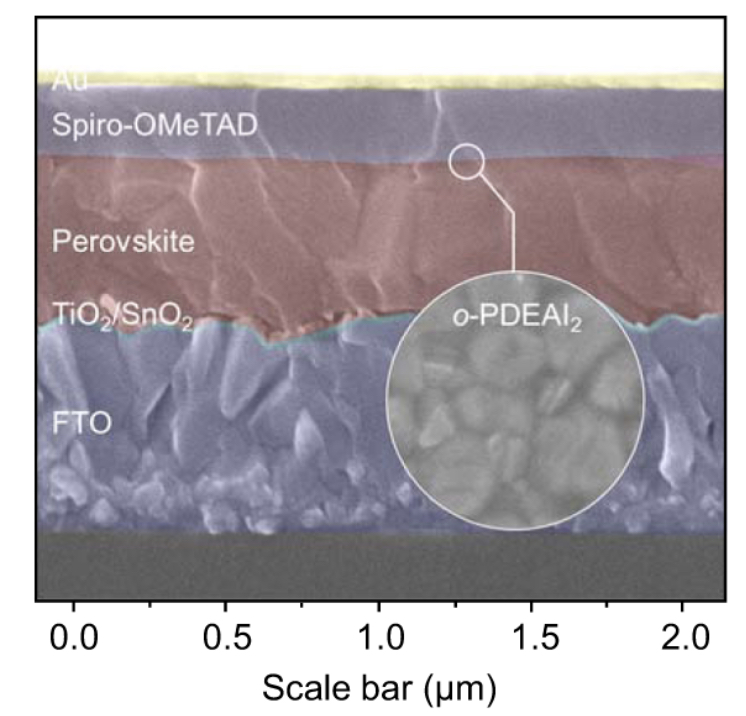 A group of chemists from Kaunas University of Technology (KTU), Lithuania synthesised materials that were used for constructing a record-breaking perovskite solar module, with an efficiency of 21.4 per cent. This was achieved through the passivation of the active solar cell layer, which increases the efficiency of the cell and significantly improves its stability. The study was published in Nature Communications.

Kasparas Rakštys, chief researcher at KTU Faculty of Chemical Technology: “Passivation has been applied previously, but so far, a 2D layer of perovskite is being formed on the traditional 3D perovskite light absorber, making it difficult for carriers to move, especially at higher temperatures. It is critical to avoid this because the solar cells become hot,” says co-author of the invention, KTU chief researcher Kasparas Rakštys.

To address this issue, an international team of researchers conducted a study that estimated the minimum energy required to form 2D perovskites. The surface of the 3D perovskite layer was passivated by different isomers of phenylethylammonium iodide (o-PDEAI2) synthesised by KTU. These isomers have the same molecular formula but different arrangements of atoms in space, determining the probability of 2D perovskite formation.

The picture above shows the cross-sectional scanning electron microscope (SEM) image of the PSC passivated with o-PDEAI2.

Researchers from the Lausanne Federal Institute of Technology (EPFL) in Switzerland tested the materials in perovskite solar mini-modules with an active area over 300 times larger than typical, laboratory-scale perovskite solar cells. These mini-modules achieved a record solar energy conversion efficiency of 21.4 per cent. The surface of the perovskite layer of the record-breaking mini-solar modules was coated with materials developed by KTU chemists.

“The study proved to be quite effective in preventing the negative effects of passivation on solar cells. It has been discovered that an isomer with the passivation groups closest to each other lead to the most efficient passivation due to the steric hindrance that avoids 2D perovskite formation. Interestingly, steric hindrance is also used as a tool in different areas of chemistry to prevent or slow down undesirable reactions,” says the KTU researcher.

This is not the first time that KTU scientists have set a world record in solar technologies. KTU chemists, together with physicists at Berlin’s Helmholtz-Zentrum (HZB) Research Institute in Berlin, have improved the efficiency of tandem silicon-perovskite solar cells, which now stands at 29.8 per cent. It is a world record for this type of solar element.