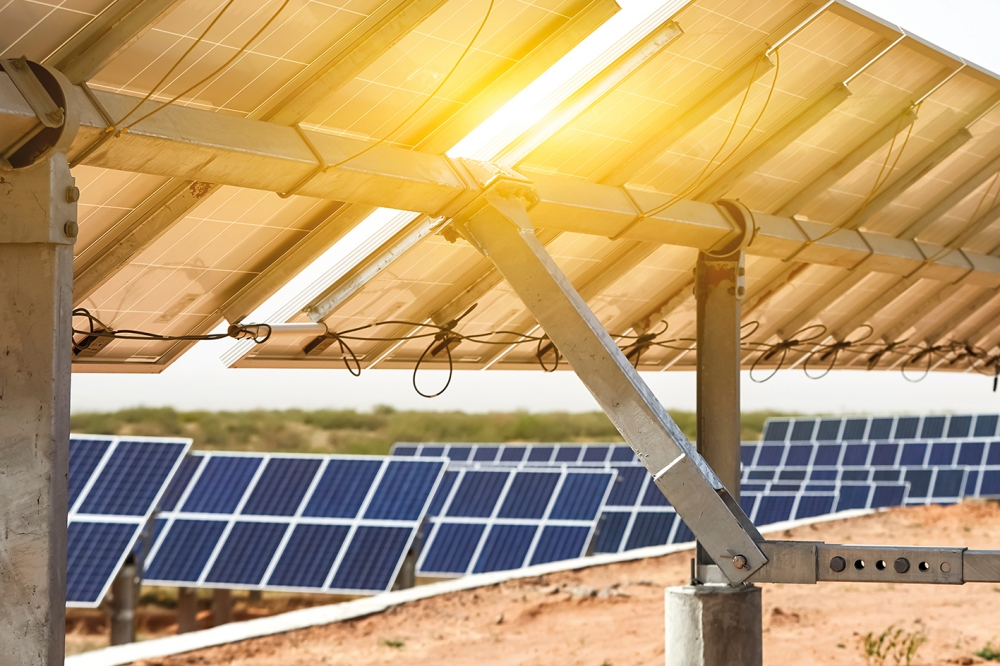 With ramping levels of chip production and proven green credentials, SiC is well-positioned to play a major role in preventing excessive global warming BY RICHARD STEVENSON

The drive to net zero cuts both ways. It promises to spur sales of products that cut carbon footprints; but it also heightens the scrutiny that is subjected to anything claimed to curb the rise in the temperature of our planet.

For many years the makers of SiC diodes and transistors have championed the capability of these devices to green our world by deploying them in place of silicon incumbents in electric vehicles, various forms of power supply, solar inverters and power drives for motors. In all these applications making the transition to wide bandgap power electronics trims efficiency losses and paves the way to higher switching frequencies, which in turn allows substantial reductions to the size and weight of electrical units.

However, producing SiC devices requires a great deal of energy, in part due to the need for incredibly high temperatures for processing this material. So does SiC really have green credentials? And if it does, is it possible to produce diodes and transistors in volumes that are high enough to actually make a difference?

Providing an emphatic ‘yes’ to both those questions were some of the biggest names in the SiC industry, speaking at this year’s European Conference on SiC and Related Materials (ECSCRM), held from 24-28 October in Tours, France. At that hybrid event John Palmour, CTO of Wolfspeed, delivered compelling evidence for the carbon-cutting capability of SiC power devices, alongside plans to ramp their manufacture; Mario Giuseppe Saggio, SiC Power Devices Design Director at STMicrolectronics, championed the benefits that these devices deliver to electric vehicles, as well as outlining the company’s roadmap for increasing its SiC power portfolio; and Victor Veliadis, Deputy Executive Director and CTO of PowerAmerica, presented an option for cutting the cost of SiC device manufacture.

Gloriously green
Speaking in person at the conference, Palmour presented the results of incredibly rigorous calculations for evaluating the environmental impact of SiC devices. This work, considering the energy of SiC device production from the “cradle to the factory gate”, included factors such as the energy to build and ship production tools and make substrates.

When comparing a 400 V silicon IGBT with a SiC MOSFET – these are rivals for deployment in a typical electric vehicle – researchers found that the wide bandgap rival takes about four times as much energy to produce. For this class of MOSFET, requiring 4.75 GJ to make, more than three-quarters of the energy expenditure is associated with the electricity consumed during its production. However, the savings that come from SiC easily outweigh the additional energy required for its production. For a sedan in EV form, assuming that it covers 200,000 miles over its lifetime – that’s a reasonable figure, given that the relatively few moving parts should ensure high reliability – the superiority of SiC over silicon is, in energy terms, a factor of 7:1. And if the EV can operate at 800 V rather than 400 V, this factor climbs to 13:1. Such high returns matter a great deal to the automotive industry, emphasized Palmour, because they allow this sector to get closer to its carbon-neutral target.

Even higher returns on energy expenditure are possible in the solar sector. That’s not surprising when considering that cars tend to spend most of their time not being driven, while PV inverters operate for many hours every day. Palmour stated that for a 50 kW system in Albany, the payback would be 55:1, while in the sunnier climes of Phoenix, that figure should hit 77:1.

Further insights into the benefits of using SiC in electric vehicles were provided by Mario Giuseppe Saggio from STMicrolectronics. He pointed out that a typical internal combustion engine has a mass of between 100-250 kg, runs at 250 °C, has an efficiency ranging from 30 percent to 45 percent, and for every kilometre driven, it emits more than 100 g of CO2.

“That’s a very large number,” pointed out Saggio. In comparison, electrical motors are considerably lighter, operate at 65 °C with an efficiency of more than 90 percent, while emitting no CO2.

Sales of electric vehicles are tipped to climb at a phenomenal rate. Saggio pointed out that one market analyst recently revised its forecast upwards, upping the figure for the compound annual growth rate for the next few years from an already impressive 27 percent to a whopping of 42 percent. Such an astonishing growth rate will help to meet goals for market shares of EVs: in the US and Europe, political leaders have set targets of 50 percent and 37.5 percent by 2030, respectively; while China is aiming for 30 percent by 2025.

Moving to far greater electrification of transportation will deliver a tremendous hike in sales of semiconductor devices to automakers. According to analysis quoted by Saggio, the car market was worth $35 billion in 2020, and will soar to more than $70 billion by 2025. Cars with internal combustion engines have a semiconductor content that typically totals $400, while for EVs, this figure tends to top $1000.

Saggio claimed that the motivation for using SiC devices, rather than those made from silicon, is not limited to a higher efficiency. The wide bandgap device also offers a smaller form factor and diminished demand for cooling – SiC has an excellent thermal conductivity, and can handle very high temperatures. For automotive applications, these merits have led to SiC being considered for traction inverters, high-voltage DC-to-DC converters and on-board chargers. While the cost of SiC is higher, with Saggio saying it can be $300 more, analysis by Goldman Sachs suggests that thanks to a higher efficiency, switching from silicon to wide bandgap devices delivers efficiency savings worth around $2000.

When accelerating hard, the power consumed by an EV is very different from when it is coasting along. These variations in load lead to differences in values for efficiency. Saggio compared values for efficiency at different loads, showing that for typical driving conditions, the benefits of SiC over silicon are even greater than at high loads.

For many considering whether to buy an EV, a potential deal-breaker is the long charge time. But, in future, it may take no longer to charge a car than fill a tank, suggested Saggio. He spoke of the possibility of a 350 kW fast charger, capable of injecting enough energy into a battery in 5 minutes to increase the vehicle’s driving range by 250 km. In his view, 800 V devices would suit this application, and could speed adoption of SiC MOSFETs rated at this value or slightly higher.

Incredible expansions
Many of the manufacturers of SiC devices have plans for a massive increase in their production capacity. The roadmap for Wolfspeed is well-publicised, with the building of a large fab in the Mohawk Valley in New York state attracting a lot of publicity.

During Palmour’s presentation, he offered an update on the construction of this 484,000 ft2 fab that will swell the company’s production capacity by a factor of 30 compared with 2017. Despite the pandemic, the build is on track, with opening slated for 2022. Initially, Wolfspeed planned to start device production in its new fab on 150 mm substrates, before shifting to 200 mm variants in 2024. But this has changed, with the manufacturer now to use the larger size from the outset. Although there are downsides – currently, the cost-per-unit-area on 200 mm SiC is higher, due in part to an increase in the thickness of the substrate from 350 mm to 500 mm – there are considerable advantages in avoiding having to re-tool two years down the line.

Palmour provided some insights into the progress of Wolfspeed’s 200 mm SiC substrates and epiwafers. He shared cross-polarised images of 200 mm SiC substrates, saying that they indicate a very high a structural quality. Dislocation maps reveal basal plane and threading-screw densities of 684 cm-2 and 289 cm-2, respectively. Following chemical mechanical polishing, surface quality has been shown to improve, with a Lasertech surface scan revealing no scratches and just 66 defects. Another encouraging result is that trials of epilayer growth in three reactors show that it is possible to realise variations in thickness and doping uniformity that are just over 1 percent.

STMicrolectronics is also expanding its SiC production capacity. It is setting up a sister fab in Singapore, with qualification taking place in the final quarter of 2021. For producing its SiC diodes and MOSFETs, this multi-national draws on a combination of its internal production of 150 mm substrates, thanks to the acquisition of Norstel in 2019, and a supply agreement with Wolfspeed for material of that size. STMicrolectronics has interest in 200 mm SiC, and announced this summer that it had demonstrated the fabrication of SiC diodes on this platform.

Production of SiC MOSFETs is well-established at STMicrolectronics, with third-generation products automotive-qualified in late 2020, and a fourth generation underway. Saggio explained that in all these iterations a planar architecture has been favoured over a trench design, because it ensures a simple, very high yield process that is scalable. What’s more, this geometry results in a higher channel mobility.

With the introduction of each new generation of MOSFET, customers gain access to better devices. Resistance has fallen from 52 mW to 21 mW and then on to 15 mW with the shift from the second to the third and then the fourth generation of SiC MOSFETs, a move that allows designers to exploit more current for the same die size, or a smaller chip for the same on-resistance. According to Saggio, one of the benefits of replacing a second-generation device with a third-generation equivalent is a trimming of losses by 65 percent.

Saggio also took the opportunity during his presentation to warn delegates of a false myth that is perpetuating and threatening to provide a headwind to the phenomenal growth in SiC sales. Rumours are circulating that SiC MOSFETs suffer from reliability issues that are linked to bias threshold instability. However, Saggio said that he has seen no evidence for this.

Additional motivation to migrate SiC device production to the 200 mm platform came from Victor Veliadis from PowerAmerica. He claimed that a shift from 150 mm to 200 mm SiC substrates could cut costs by 20 percent. However, to succeed, engineers making this move must increase thickness and doping uniformity.

Veliadis championed the use of silicon fabs for manufacturing SiC devices. He accepts that some new tools are needed that are specific to SiC production. They include equipment used for: dry etching; substrate thinning; ion-implantation doping; and for providing new processes for metallisation, and for the formation of ohmic contacts and a gate oxide with a high-quality interface. According to Veliadis, the total cost for all this equipment is in the range $12-15 million. He believes such an investment is worthwhile, allowing silicon fabs that are “20 years obsolete” to process SiC.

With SiC’s green credentials beyond doubt, and COP 26 highlighting that the need to tackle climate change is more pressing than ever, it is good to know that there are plans in place to deliver a tremendous ramp in the production of SiC devices. After all, this rapidly growing multi-billion dollar global industry is going to play a key role in securing the future of our planet.