All Change For The SWIR Market? 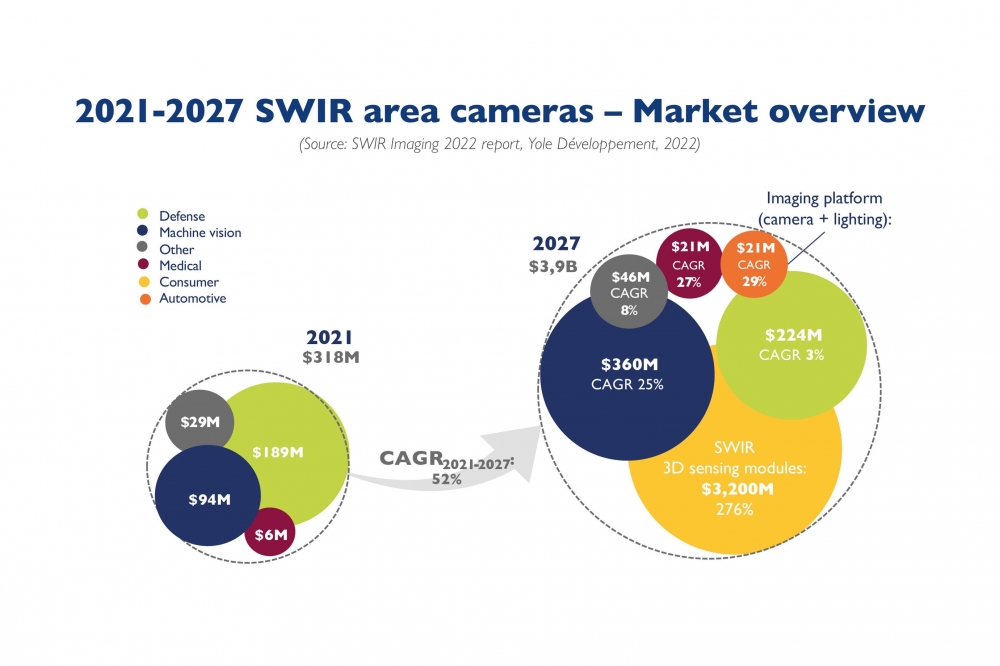 According to Yole Développement, the short wave infrared (SWIR) imaging industry is due for a change with the rise of under-display 3D sensing applications in smartphones and growth in machine vision and automotive applications.

InGaAs is the most mature SWIR imaging technology but quantum dot technology is emerging from companies such as STMicroelectronics and Sony.

Axel Clouet, technology and market analyst for imaging and display at Yole says: “SWIR imaging is used in defence, mainly for laser target designation. This is the largest segment by value, worth $189 million in 2021. In machine vision, SWIR has many applications, including plastic or food sorting, solar panel inspection, and content inspection. This segment is growing faster than defence and could reach $360 million value in 2027, up from $94 million in 2021.”

SWIR is also being promoted for automotive ADAS applications as it allows stable image acquisition in harsh conditions such as fog, snow, sun glare, and nighttime. The segment might start by 2024 at $4 million, reaching $21 million by 2027.

The first commercial products could be released by 2023 and the consumer segment could generate $3.2 billion at the module level by 2027, says Yole. Eye safety regulations are less stringent in SWIR than in NIR.

Besides under-display, SWIR would allow the use of more powerful illumination and generally increase range and reliability of 3D sensing solutions compared to NIR.

In 2021, the SWIR industry's leading players were SCD, Sensors Unlimited, and Teledyne FLIR, sharing more than 50 percent of the 11,000 units shipped in the year. These leaders are subsidiaries of leading defense companies that started developing SWIR technology with the support of governments for strategic purposes. They constitute the legacy side of the S WIR industry .

STMicroelectronics and Sony, are now active players in SWIR with new technologies including quantum dots. Their entrance might be explained by the growing demand from consumer OEM6 for new integration designs such as under- display 3D sensing in smartphones. If SWIR imagers reach a low price point, shipments could skyrocket to hundreds of millions within a few years, says Yole. The SWIR industry could emulate the current 3D imaging industry, where STMicroelectronics and Sony share nearly 95 percent of the 225 million shipments (2020 data).