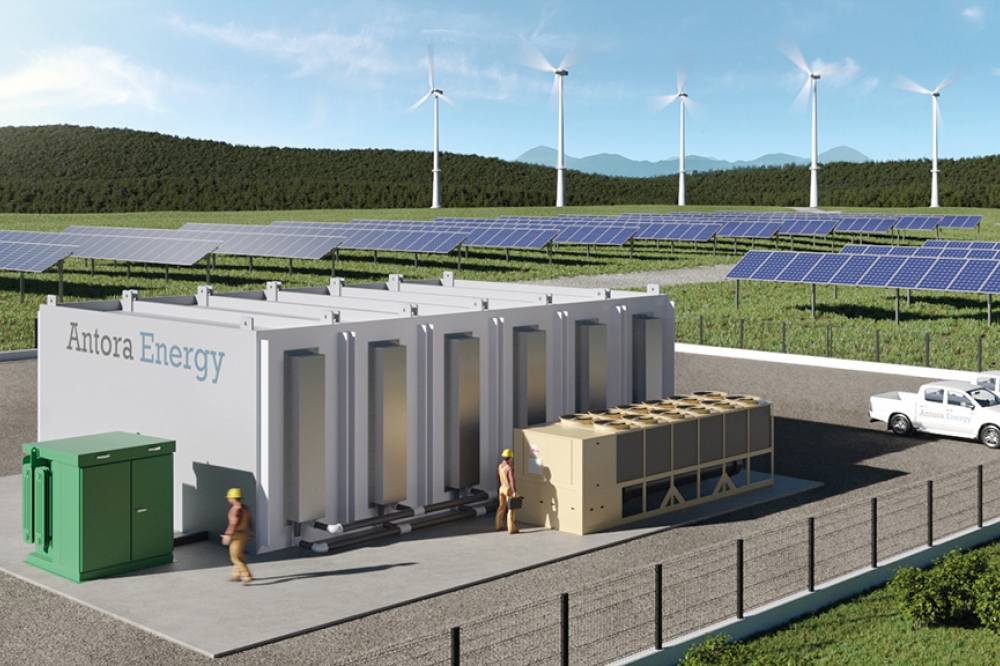 A LITTLE OVER A DECADE AGO it seemed that III-Vs were destined to play a major role in greening the grid. Systems featuring highly efficient compound semiconductor cells, harvesting concentrated sunlight from dawn to dusk, were promising to trim the cost of solar energy produced in sunny climes, and in turn drive up the deployment of renewable sources. But a double whammy of a global credit crunch and tumbling prices for silicon panels left this nascent industry dead in the water and prevented a really neat solution for energy generation from having the impact it deserved.

But maybe, just maybe, III-V devices that convert radiation into electricity have not been banished to the wilderness for ever and can still make a major contribution to the energy industry. By stretching the absorption sweet spot to longer wavelengths, there is now a renewed hope that III-V cells can help to curb the burning of fossil fuels. How? By helping with the vexing challenge of energy storage. The idea is to build systems that draw on excess electricity within the grid to heat carbon blocks to well over 1000 °C, before III-V thermophotovoltaics convert this thermal energy back into electricity as the thermal store cools. This is the vision of Antora Energy, a west-coast start-up that boasts record-breaking thermophotovoltaic cells and has plans to demonstrate its technology at significant scale later this year.

The origins of Antora can be traced back to 2017 when two of its co-founders, Justin Briggs and Andrew Ponec, started discussing what they would do after they left at Stanford University. Both were driven by a strong desire to tackle climate change, identifying energy storage as the biggest problem that remains.

“We started from a totally technology agnostic standpoint,” says Briggs, now COO of Antora. “How do you store cheap solar and wind energy for low cost, so that you can beat fossil fuels on raw economics?”

Seeking an answer, this duo explored many options. While hydro-electric schemes have much to offer, the terrain is unsuitable in many locations. What’s needed is a universal approach. In that context, does hydrogen offer the best solution? Or some kind of thermal system? Or maybe a mechanical storage contraption; a kinetic storage system based on the likes of flywheels; or an invention involving compressed air?

As they mulled over all these options, Briggs and Ponec came into contact with their third co-founder, David Bierman, an entrepreneur with a PhD from MIT. At the time all three were participating in the Activate Fellowship for hardtech entrepreneurs.

Briggs, Ponec and Bierman hit it off from the get go. As well as sharing a strong desire to tackle climate change through energy storage, they held very similar views on how a company should go about its business.
Their philosophy went further than simply wanting to put together a wonderful, strong team to decarbonise the world with a green energy storage system. They also wanted to create a positive, supportive company culture, where everyone connected through joy and laughter. “We’re solving a really tough problem,” says Briggs. “Climate change is extremely hard and sad, and when you’re working on a big, hard problem, sometimes you need to be uplifted by the people around you.”

Another attribute held by these entrepreneurs is an open, humble approach. They know that they don’t have all the answers, and accept that it’s not always clear what’s the best technology and the optimum business model. So they solicit input from experts, collaborators and partners.

A lasting legacy
When this triumvirate were chewing over the options for storing energy, they drew on the knowledge of Ponec, who had previous experience in starting a company. During his degree, Ponec took time out to start a company, Dragonfly Systems, subsequently bought by SunPower. During the acquisition, Ponec got to know SunPower founder Richard Swanson, a trailblazer of thermophotovoltaics. Swanson’s legacy includes smashing the record for thermophotovoltaic conversion efficiency – his efforts in the late 1970s and early 1980s propelled efficiency to nearly 30 percent, a record that stood for four decades.

“We thought, if you take all of the advances today that have been made in solar PV, from what it was then to what it is now – decades of research and billions of dollars of development funds – and apply those advances to thermophotovoltaics, what sort of efficiencies could we be hitting?”

Applying this reasoning, the founders decided to switch from silicon, the material used for the thermophotovoltaics pioneered by Swanson, to III-Vs. “Going to those fancier materials, you’re paying an upfront cost, but you’re reaping the benefits in efficiency and power density,” argues Briggs.

At first glance, this line of thinking may raise a few eyebrows, as surely the far, far higher chip costs of the III-Vs overshadow their superior performance. But that neglects that at the temperatures employed for the thermal store, infrared radiation is so intense that it is comparable to solar concentration factors of several hundred. So, like concentrating PV, higher chip costs of the III-Vs are acceptable. What’s more, this time they come without additional system costs associated with focusing the radiation and aligning cells to maximise the harvest.

Selecting the best substance for this thermal store has been relatively easy, according to Briggs. He views carbon as a “superhero” material, combining an incredibly high specific heat capacity with a high thermal shock resistance, thermal and mechanical durability and robustness, low cost and a very wide operating range. Note that carbon doesn’t melt under ambient temperature, but sublimes above 3000 °C, well beyond what is practical for an efficient thermal stores. For example, while there are many standard insulation materials at 1500 °C, choice is incredibly limited at 3000 °C.

Figure 1: Photograph of one of Antora’s prototype thermal storage systems. With a capacity of 500 kWh, this system has been used to demonstrate the core functionality of the technology.

Teaming up with engineers at NREL, primarily Myles Steiner and Dan Friedman, Briggs and his co-workers broke the record for thermophotovoltaics. At the 47th IEEE Photovoltaic Specialists Conference, held in Calgary, Canada, in summer 2020, they announced values of 31 percent and 30 percent for GaAs and InGaAs cells that were harvesting energy from thermal stores at 2330 °C and 1300 °C, respectively. Since then, those at Antora have continued to advance their devices, while moving on to partner with a commercial foundry. The best cells now hit an efficiency of around 45 percent.

While the design of these devices draws heavily on that of III-V solar cells, there are key differences. Aside from the obvious shift in absorption edge, arguably the biggest change is in the back reflector. In a solar cell, photons below the cell’s bandgap are not absorbed and this energy is simply lost. But in a high-performance thermophotovoltaic, these photons can be reflected back towards the thermal store, enbaling their energy to be recuperated.

“You’re basically eliminating a major loss mechanism,” explains Briggs. “You’re preventing low-energy radiation from being lost, and instead keeping it in the system.” The low energy photons arriving back at the thermal store are converted to phonons, topping up the energy held by the carbon blocks.

Due to the intense radiation produced by the high-temperature thermal store, the thermophotovoltaics have to handle very high current densities. This threatens substantial ohmic losses. To combat this, the team at Antora have worked hard to drive down the series resistance within their cells.

Further gains in performance have come from increasing the crystal quality of the material. This ensures a very long radiative lifetime, and a high external radiative efficiency, leading to a high conversion efficiency for the devices.

Thermodynamic considerations indicate that the cells need to be cooled to maximise efficiency. As these devices are not positioned really close to the heated carbon, essentially nearly all the heat transfer is via radiation; and in that geometry, the intensity of the radiation impinging on the cell does not depending dramatically on the separation distance. To optimise performance at the system level, the cells are cooled to below 100 °C, with the exact temperature balancing the benefit of higher conversion efficiencies against the extent of energy expenditure required for cooling.

Unlike concentrating photovoltaics, efficiency at the system level is very close to that of the cells. Resistive heating of carbon blocks is almost 100 percent efficient, and electrical losses that come from stepping up and down voltages are minimal, along with those associated with ancillary loads. Meanwhile, energy leakage through the thermal insulation is about 1 percent per day. “Of that whole chain of things, thermophotovoltaic efficiency is by far the biggest penalty.”

Tremendous headroom
The good news is that the efficiency of these devices, while impressive, is still far from what is possible. Briggs believes that the team could reach efficiencies of 50 percent or more by: improving the device’s back reflector, driving down series resistance, and increasing crystal quality. While the efficiency for single-junction solar cells, defined by the Shockley-Quessier limit, is just shy of 34 percent, thermodynamic considerations suggest that the upper limit for a thermophotovoltaic is beyond 60 percent. And if a single-junction device is replaced with a multi-junction variant, even higher values are possible.

Although Briggs and colleagues have designed devices that could approach 60 percent efficiency, breaking records and securing well-deserved publicity for these achievements is not high on their agenda. Right now their energy is being directed at demonstrating a pilot system, built with cells that have been produced by a foundry and are sufficiently efficient to commercialise this technology.

To date, the team’s cells have a collective output power of 50 kW, enough for the first power unit of a modular system that will ultimately have an electrical energy storage capacity of 100 MWh, and an electrical power capacity of around 1 MW (see Figure 2 for details of what such a system might look like). Hopefully this customer-sited pilot will enable other potential customers to grasp the capability of Antora’s technology and place orders.

If the company’s technology takes off, and thermophotovoltaics start to be deployed throughout the world to help green grids via energy storage, this would be great news for the entire compound semiconductor industry, swelling volumes for makers of III-V substrates and semiconductor foundries.

“We’re fans of III-V opto-electronics in general,” says Briggs. “We think it’s just a cool technology. If things go well, we hope to be at the point where we’re a driver in that market.”

Let’s hope that happens. If it does, as well as greening the grid and the manufacturing sector, III-V devices will be offering an even better bang-per-buck in many industries, including communication, automotive and healthcare.

Main image: Artist’s rendering of Antora’s first product, a thermal storage system with an electrical capacity of 100 MWh / 1 MW. The product stores thermal energy in carbon blocks above 1000°C. The thermal radiation from these blocks can be converted into electricity or industrial process heat. With this product, the Antora team is aiming to decarbonize the manufacturing sector—the largest emitter of greenhouse gases and one of the hardest-to-decarbonize industries on the planet—by providing zero-carbon heat and power on demand. Antora also aims to deploy energy storage products on the grid to enable deeper penetrations of solar and wind resources.