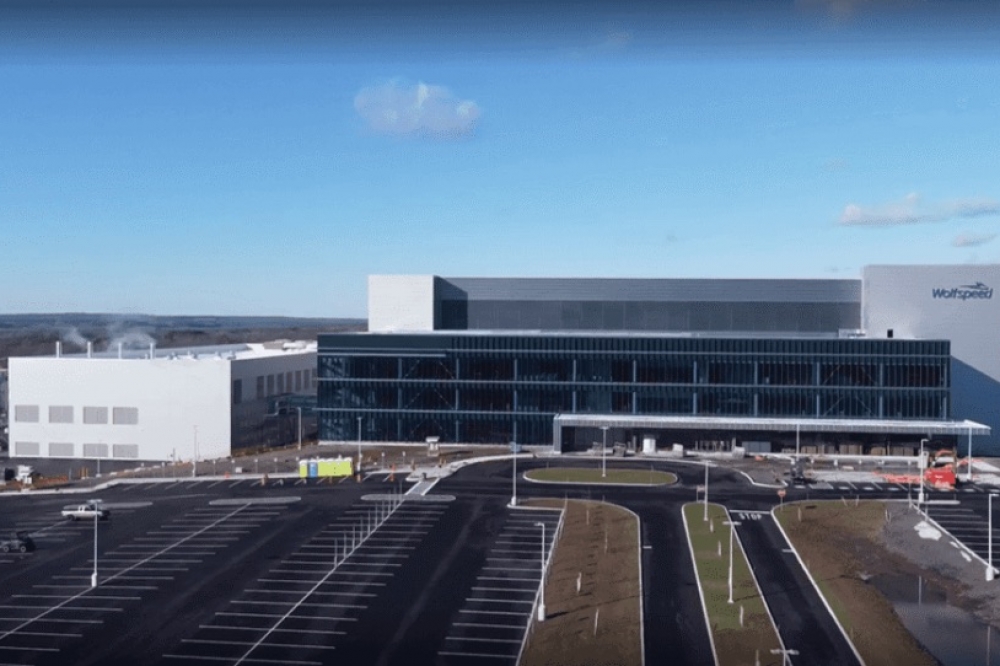 New York Governor Kathy Hochul was on site to officially welcome Wolfspeed to Mohawk Valley, in addition to Eric Bach, Senior Vice President of Product and Chief Engineer at Lucid Motors. Wolfspeed recently announced a multi-year agreement with Lucid to supply SiC devices. As a key partner, Lucid Motors had the honor of “cutting the ribbon” with its Lucid Air®, named the 2022 MotorTrend Car of the Year®. The Lucid Air Grand Touring features an official EPA estimated 516 miles of range or 1,050 horsepower.

“By cutting the ribbon on this new chip fabrication facility, we are making good on the promise of being the most business-friendly and worker-friendly state in the nation, while cementing New York as the national hub for semiconductor production,” Governor Hochul said. “Employers in cutting-edge industries like Wolfspeed will power the future of New York by bringing good paying jobs and educational opportunities to communities like this one, right here in Marcy. My administration is pulling out all the stops to position emerging industries for success in our state, and I thank Wolfspeed for this public-private partnership.”

“We are honoured to be joined by these government, community and industry leaders to celebrate Wolfspeed's Mohawk Valley Fab, New York State's economic competitiveness and American chip manufacturing,” said Gregg Lowe, president and CEO of Wolfspeed. “I am incredibly proud of the team, and all our partners, who brought this monumental fab to life in such a short time. This fab will not only supply customers in 2022 but also support long-term American competitiveness.”

“As a market leader and technology innovator, we share Wolfspeed's values and mission to provide industry-leading solutions for energy efficient consumption and a sustainable future,” said Eric Bach, Senior Vice President of Product and Chief Engineer at Lucid. “Today, we are very proud to announce we will be partnering with Wolfspeed to source the highest quality Silicon Carbide components here in the State of New York, providing even more American jobs for the EV industry.”

The automated Mohawk Valley facility is the world's first and largest 200mm Silicon Carbide fab providing uncompromised wafer quality and higher yield. The devices developed in Mohawk Valley will be critical in feeding Wolfspeed's $20B+ pipeline and the global semiconductor industry. The first Silicon Carbide lot was run at the facility earlier this month. More than 600 high-tech Mohawk Valley jobs will be created by 2029.

“We are proud to be a part of the growing semiconductor industry in New York and appreciate the strong, sustained support received from our local partners,” said Rex Felton, SVP of Global Operations. “This facility showcases our commitment to the highest standards for operational excellence that will lead to more output and therefore, more product in the hands of our customers.”

Wolfspeed is also expanding its operations in N.C. with the creation of a materials factory in Durham, N.C., scheduled to be completed later this year. Together, these factories establish a national SiC corridor on the East Coast, combining Wolfspeed's 30+ year history of research and development in N.C. with the strong technology base, rich manufacturing heritage, and high quality talent in N.Y.'s Mohawk Valley.

“SUNY Polytechnic Institute is proud to join Governor Kathy Hochul in congratulating Wolfspeed as they cut the ribbon on their state-of-the-art Mohawk Valley Fab,” said SUNY Poly acting president Tod A. Laursen. “This site now holds incredible promise for our region, New York State, and especially our graduates who are well prepared for the types of leading-edge careers that will be available. I am grateful for our partnership with Wolfspeed, which is powering targeted, semiconductor-centered curricula and providing new high-tech equipment at SUNY Poly via the $250,000 Wolfspeed Curriculum Gift; uplifting traditionally underserved students through scholarship opportunities from Wolfspeed's $2,000,000 scholarship program over 10 years; and providing $1,500,000 in funding to establish the Dr. John Edmond and Dr. John Palmour SUNY Polytechnic Institute Endowed Faculty Chairs; all of which underpin the continued expansion of science, technology, engineering, and mathematics (STEM) opportunities for students at SUNY Poly.”

“Twenty-seven months ago, Wolfspeed, State and Local partners announced plans by Wolfspeed to build the world's largest 200 mm state-of-the-art SiC semiconductor facility here in the Mohawk Valley. Today we celebrate the opening of Wolfspeed's Mohawk Valley Fab. Wolfspeed is a leader in the power electronics market with the transition from Silicon to SiC semiconductors, and the Mohawk Valley Region is at the heart of this industry transformation,” said Mohawk Valley EDGE President and CEO Steven DiMeo. “We want to give special thanks to Gregg Lowe and the entire Wolfspeed team for their commitment and the tremendous community partner they have become with their financial commitments to SUNY Poly and Mohawk Valley Community College to produce the next generation of technology leaders.”