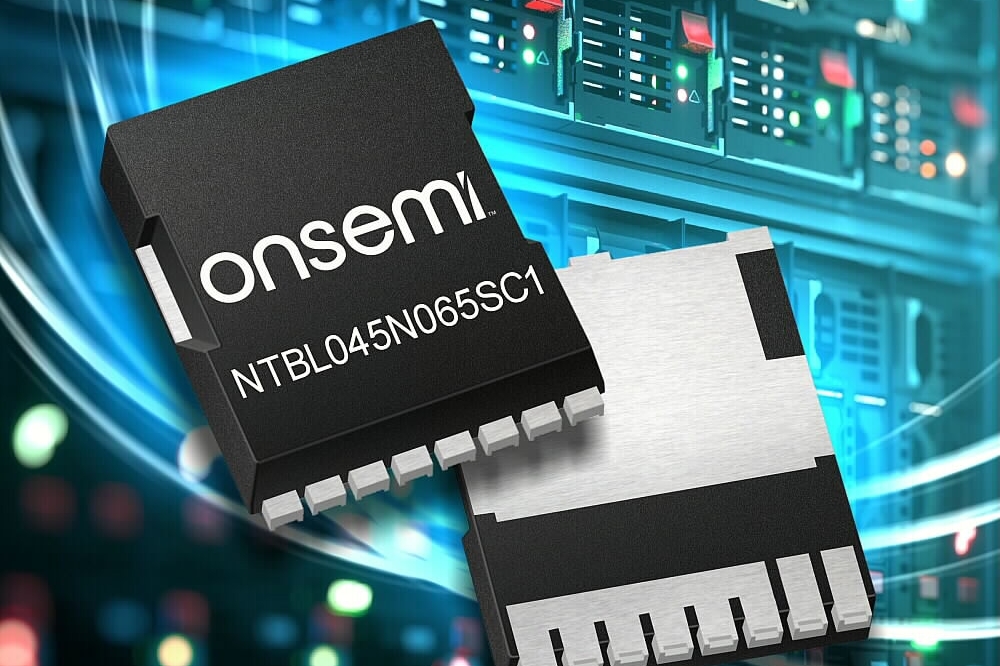 Onsemi has announced the world’s first TO-Leadless (TOLL) packaged SiC MOSFET at PCIM Europe . The transistor addresses the rapidly growing need for high-performance switching devices that are suitable for designs with high levels of power density. Until recently, SiC devices had been supplied in D2PAK 7-lead packages which required significantly more space.

In addition to its smaller size, the TOLL package offers better thermal performance and lower package inductance (2 nH) than a D2PAK 7-lead. Its Kelvin source configuration ensures lower gate noise and lower switching losses – including a 60 percent reduction in turn-on loss (EON) when compared to a device without a Kelvin configuration, ensuring significant improvements in efficiency and power density in challenging power designs as well as improved EMI and easier PCB design.

“The ability to deliver highly reliable power designs in a small space is becoming a competitive advantage in many areas, including industrial, high performance power supplies and server applications,” said Asif Jakwani, senior vice president and general manager, Advanced Power Division, Onsemi. “Packaging our best-in-class SiC MOSFETs in the TOLL package not only reduces space but enhances performance in many areas such as EMI and reduces losses. The result is a highly reliable and rugged high-performance switching device that will help power designers meet their stringent power design challenges.”

The first SiC MOSFET to be offered in the TOLL package is the NTBL045N065SC1 which is intended for demanding applications including switch-mode power supplies (SMPS), server and telecommunication power supplies, solar inverters, uninterruptible power supplies (UPS) and energy storage. The device is suitable for designs that are required to meet the most challenging efficiency standards including ErP and 80 PLUS Titanium.

The NTBL045N065SC1 has a VDSS rating of 650 V with a typical RDS(on) of 33 mΩ and a maximum drain current (ID) of 73 A. Based upon wide bandgap (WBG) SiC technology, the device has a maximum operating temperature of 175°C and ultra-low gate charge (QG(tot) = 105 nC) that significantly reduces switching losses. Additionally, the TOLL package is MSL 1 (moisture sensitivity level 1) rated – and guaranteed – to ensure that failure rates in mass production are reduced.