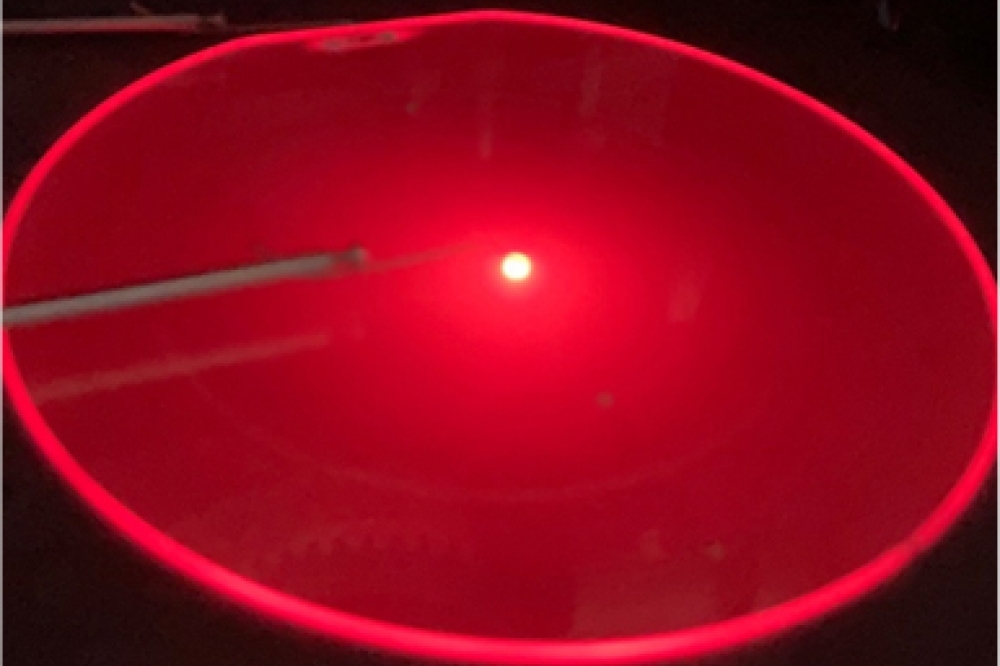 As tech giants race to get AR headsets to market, all eyes are on a handful of companies striving to deliver reliable, bright red microLEDs. Soft-Epi is about to join the very few that think they can, reports Rebecca Pool.

While Soft-Epi of South Korea has been developing GaN-on-sapphire epi-wafers for blue and green LEDs for many years, late last year, company researchers discovered they could also get their GaN materials to emit red light. As James Kimoon Lee, VP of sales and marketing at Soft-Epi, tells Compound Semiconductor: “At the time, we just didn't know it was possible for us to do this, but our research and development engineers suddenly realised they could... Efficiency levels were good in terms of brightness, and we've been developing GaN red epi-wafers for microLEDs ever since.”

Given this, Soft-Epi researchers are currently experimenting with doping levels, new dopants and MOCVD conditions to boost their GaN red epi-wafer efficiencies. “Our work looks very promising and by the end of this year, we want to reach a figure of 3%,” he says. “Looking at results so far, we thought now is a good time to ship our red GaN epi-wafers to those that need it.”

The problem with red

While red LEDs have been successfully manufactured using AlInGaP-based materials, the same cannot be truly said for the diminutive micro-versions. High surface recombination velocities in the material lead to efficiencies plummeting as chip size decreases - researchers can address the issue with sidewall passivation, but only with partial success.

What's more, AlGaInP-based microLEDs suffer from poor thermal stability at a high temperature. Thanks to carrier leakage over the small barrier heights, efficiency droop kicks in as temperatures rise.

Given these problems, microLED manufacturers are ready for a user-friendly alternative to AlGaInP. Industry players have been experimenting with various methods to achieve red emission, including colour conversion via nanophosphors or quantum dots, but developing native red-emitting InGaN substrates looks set to provide a more straightforward answer, compatible with existing production lines. For example, in 2018, Soitec of France revealed InGaN substrates that could emit red light while a year later, UK-based Plessey claimed a world first with its InGaN on silicon-based microLEDs. Then in November 2021, Porotech, also of the UK, unveiled its red microLED display based on InGaN materials. And doing it differently, Aledia, France, has fabricated GaN nanowire microLED chips on 12 inch silicon wafers.

A flurry of other companies and research institutions have made similar microLED announcements. But as Lee points out, those touting red microLED success tend to have exclusive contracts with the likes of Meta and Google, eager to snap up the technology for AR/VR applications, wearable watches and more.

“This means [other] microLED developers are having difficulties in their R&D because they cannot get red GaN epi elsewhere,” he says. “We see this as a good chance for us to inform industry on the development of red GaN, and of course, let them know what our company has done so far.”

To date, Soft-Epi has been largely depositing its GaN-based red epi-layers onto four and six inch polished and patterned sapphire substrates, but Lee is clear that the company can grow layers on SiC and silicon wafers. “In the future, we believe that GaN on silicon epi-wafers are going to be very important, so we've been working on this,” he says. “We're in talks with a partner that is making VR/AR technology, to pursue red GaN on silicon wafer development with them.”

Still, it's no secret that growing GaN and InGaN layers is difficult. The large lattice mismatch and piezo-electric field between InGaN active layers and GaN layers leads to many defects and wavelength shift within the InGaN quantum wells, which deplete a device's performance.

Lee and colleagues at Soft-Epi don't appear particularly fazed by these issues, but remain tight-lipped on how they have tackled them. “Controlling indium is key, and we can do this very precisely,” says Lee. “It's very important to minimize stresses [in these layers].”

So what now for Soft-Epi and its GaN-based red epiwafers? The company hopes to provide its technology to any company developing and manufacturing microLEDs, and is sending four and six inch epi wafers to customers worldwide.

NDA agreements have been signed all round. But as Lee hints: “All our customers are very advanced in the LED industry, and we've also shipped our GaN red LED epi-wafers to a major South Korean customer.”

Soft-Epi has also been developing monolithic RGB epi-wafers, and intends to introduce these by the end of the year. Surprisingly, Lee showed the video of monolithic not only RGB but also white colour coming from the wafer grown at one time growth run as saying just arrived. See the video here. Pointing to the California-based microLED start-up, Raxium, recently snapped up by Google, Lee says: “I think we have a technology that is as good, and Google is now investing huge sums of money in them.”

“Every company is doing this its own way, and I hope a direct native GaN method for red, like ours, will be the champion,” he adds.