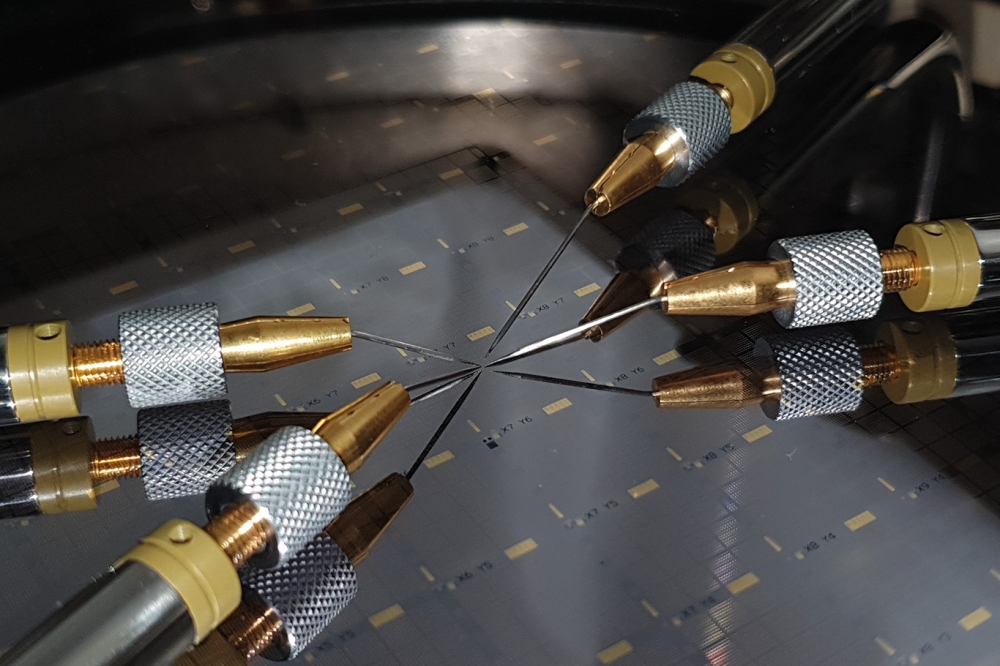 DEMAND FOR THE VCSEL shows no sign of slowing. Sales took off with deployment in wireless data communication, reached a new high when its use extended to face-and-gesture recognition systems in smartphones, and will jump again through the roll out of lidar systems in autonomous vehicles. Due to this continuous ramp in demand, VCSEL manufacturers are under increasing pressure to ship more devices.

To cater for this growing demand, makers of GaAs-based VCSELs have moved to ever larger wafer sizes - a move that as well as increasing volume, addresses the call to drive down the cost per device. As far back as 1994, the world's leading supplier of epiwafers, IQE, signed its first commercial contract for 75 mm wafers, and demonstrated its capability to produce these heterostructures on 100 mm wafers - although it wasn't until 2013 that mass-production kicked-off on this large size. Since then progress has accelerated. 150 mm wafers that are capable of providing 200,000 devices were introduced in 2014, and this May IQE introduced the world's first commercially available 200 mm VCSEL wafer, enabling further expansion of the sensing market.

The need for quick-fab
Alongside increases in the production throughput of the VCSEL, realised partly through the migration to larger wafers, there has been a tightening of tolerances to meet the more stringent demands of emerging applications. Due to this state-of-affairs, there is an ever-increasing need for device-level characterisation that delivers a rapid assessment of wafer uniformity and exposes any drift occurring during a manufacture cycle. Such a service complements the production-line characterisation toolkit by providing active device data.

Our team, a collaboration between Cardiff University and IQE, has striven to develop such a service through a project entitled ATLAS, Advanced manufacturing Techniques for semiconductor LASers. This effort has focused on drastically reducing the time taken to fabricate a conventional VCSEL structure by utilising a simplified strip-backed process, which can provide fast feedback to production teams. The aim has been to complete fabrication within 24 hours.

The proposed ‘quick-fab' VCSELs are not intended for packaging as individual chips, employed in end-user technology. However, they do need to be compatible with automatic wafer-level probing, which enables the mapping of various characteristics, including the VCSEL's emission spectrum and its optical output power as a function of current and voltage. From these measurements it is possible to extract key characteristics for this class of laser, such as its threshold current (the minimum current required to realise laser action), its power-conversion efficiency and its peak wavelength.

An additional benefit provided by a quick-fab service is that it allows VCSEL manufacturers and their customers to develop new products more efficiently. VCSELs are complex structures, comprising up to 200 or more layers, each with a carefully controlled composition and a thickness ranging from 1 µm down to as little as 4 nm. While simulation software supports the design of a new VCSEL, to satisfy an intended application this often has to be accompanied by a design-of-experiment. To optimise device performance, engineers tend to use several reiterations of design, epi-wafer growth and VCSEL fabrication. Our VCSEL technology quick-fab supports such endeavours, providing process monitoring and aiding R&D and product development.

Note that the benefits of VCSEL quick-fab are not limited to producing devices for large consumer markets. This form of fast-feedback also has a role to play in supporting the emergence of specialist atomic sensor technologies, such as miniature atomic clocks, magnetometers and quantum gyroscopes. All these technologies call for stringent VCSEL specifications. For example, caesium-based atomic sensors require stable single-mode sources targeting atomic transitions at 894.6 nm and 852.347 nm. Hitting these transitions requires some current and temperature tuning, but ideally this is minimal, to ensure high efficiency and lessen the impact on the environment of the accompanying caesium vapour cell.

There is yet another benefit of VCSEL quick-fab, related to a predominant design challenge. With this class of laser it is crucial to have a healthy overlap between the optical gain spectrum and the resonant cavity mode. That's because the VCSEL cannot operate over a wide range; rather, it is constrained to emit at a particular wavelength by virtue of its optical design. To ensure efficient operation, the peak of the gain has to align with the cavity mode. This situation is analogous to shining a torch through a keyhole, where alignment is essential to enable efficient transfer of light. Sub-optimal alignment can be compensated by increasing the brightness of the torch, but this comes at the expense of consuming more energy.

Complicating matters, both the peak of the gain spectrum and the location of the cavity mode shift with temperature, and they do so at different rates. A prudent designer accounts for this, targeting the gain peak and cavity resonance to coincide at the designed temperature and operating current. Quick-fab VCSELs can speedily determine if this is actually the case.

The quick-fab concept
One of the attractive features of the VCSEL is the relative ease of large-scale manufacture. As all the light is emitted vertically from the surface, engineers undertake on-wafer testing, rather than cleaving material into individual chips, as is the case with edge-emitting lasers. However, fabricating VCSELs is not that simple. It is certainly not trivial to confine light and current in localised regions - and these are pre-requisites for efficient operation.

The widely adopted approach for ensuring localisation of electro-optical processes is to etch a mesa structure into the epiwafer to a depth that exposes an oxidation layer buried within the VCSEL structure (see Figure 2). This layer, formed from aluminium-rich AlGaAs, is partially oxidised to form an aperture or window in the centre of the mesa that defines the path for current flow. One of the merits of this approach is that it also guides light within the same region, thanks to the resulting refractive index profile.

Unfortunately, in a conventional VCSEL, it is not possible to connect an electrical wire or probe directly to the mesa, because it is too small. Due to this, the mesa is first ‘planarized' with an electrically insulating material, before a feed metal interconnect and a relatively large metal contact pad are deposited. These steps eat up time. To enable VCSEL quick fab, an approach must be taken that mitigates planarization and subsequent metallisation.

Our solution involves defining a mesa structure by etching the semiconductor epiwafer, an approach that's similar to that employed for making a conventional VCSEL - but in our case we leave portions unetched, which are subsequently used to support the electrical interconnect and contact pad. We ensure that current only flows through the VCSEL aperture by etching vias to expose the aluminium-rich layer, which is subsequently oxidised in all regions, except for the area prescribed by the VCSEL aperture. Following this, we added a topside metal p-contact and back-side n-contact, before annealing to produce low-resistance ohmic contacts (see Figure 3 for an SEM image of our device and accompanying schematic showing a cross-section).