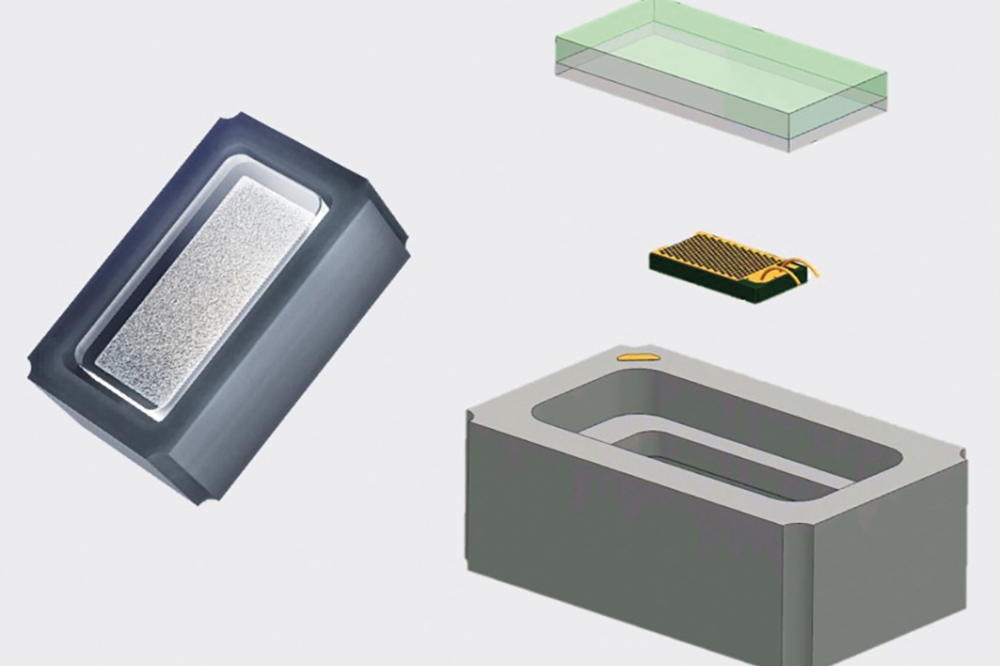 Equipped with micro-optics, VCSELs are even more attractive candidates for deployment in smart glasses, face recognition systems, automotive in cabin-sensing and lidar.

THE VCSEL is the ideal source for delivering infrared illumination for 3D sensing. This class of laser produces a narrow and stable spectrum, switches at very high speeds, and operates over a temperature range that spans from -40 °C to 125 °C. And when it is driven with short pulses, it enables the generation of high-resolution 3D distance maps.

Deployment of the VCSEL in consumer electronics goes back several years. Since 2015, it has been a standard component in smartphones. More recently, applications where it is seeing sales have broadened. Now, as well as assisting with time-of-flight measurements for face recognition and depth sensing in smartphones, VCSELs are serving in world-facing systems in phones, tablets and robots, and even delivering high-power levels needed in automotive and industrial heat treatment processes.

When designers select a bare VCSEL chip, they must package this alongside accompanying optics, connections, driver electronics and safety means. Optics are essential for transforming the beam that emanates from the VCSEL into the desired illumination pattern for the scene. To ensure eye-safety, it is crucial to have correct, properly assembled optics, as well as proper driving of the VCSEL. The downside of this multi-component approach is that by having VCSELs in a separate package, it is impossible to exploit the full potential of the semiconductor production technology, in terms of both footprint and functional integration (this is illustrated in main image).

The VCSEL revolution
At Trumpf Photonic Components we are addressing this shortcoming with a new technology, ViBO, which is short for VCSEL with integrated Backside Optics. Our revolutionary idea is to integrate all optical functions, currently provided by an additional package, directly into the VCSEL chip. The aim is to realise miniaturization while improving performance.

For wavelengths of 940 nm or more, vertical-cavity structures and the transparency of the carrier substrate allow the laser’s emission to exit through the substrate. Adopting this architecture, rather than the conventional one with emission on the epitaxy side, offers a number of benefits that include having hardly any optical losses. Given the attractiveness of this geometry, our efforts towards miniaturization have begun by flipping the direction of the light emission. With light no longer coming out of the surface of the chip, where all the processing and contacting takes place, but through the backside of the substrate, this part of the device is no longer just a mechanical interface but valuable real estate. It is here where we directly etch lenses into the GaAs to provide an optical function and enable extraordinary freedom of design for the customer. Note that the refractive index of the lens is as high as about 3.5, far more than the 1.5 to 2 of plastic and glass, giving much more freedom. What’s more, with our revolutionary design, we eradicate the need for individual alignment of laser die and optics. Instead, the optics becomes an irremovable part of the laser die, and thus a beneficial step for long-term laser safety.

With the processed surface of the chip no longer needed for light emission, this area can be used for electrical, thermal and mechanical functions, enabling optimisation of heat removal and electrical contacts.

One option is to use large contacts on the epitaxy side, enabling direct soldering with flip-chip assembly of the die – this eliminates the need for wire bonds. Merits of this approach are superior thermal management and reduced inductivity of the system. Alternatively, contacts can take the form of slim copper pillars (see Figure 2) enabling SMD mounting to the board or driver IC. Using a large number of such contacts enables individual addressability, and therefore new functionality of the VCSEL chip.

As well as offering the same functionality as the VCSEL in a packaged solution, our ViBO technology has additional benefits that can revolutionize smart-sensing systems. First, the footprint of our ViBO source is five-to-ten times smaller than a traditional VCSEL, and its height is reduced by a similar factor – it is possible to replace a millimetre-thick package with a 150 µm-thick chip. Such miniaturization is highly valued in consumer electronics, including smartphones. Consequently, it is easier to design an entire sensing system with ViBO components, thanks to their diminutive size. Second, our ViBO technology ensures an inherently eye-safe system during the whole product lifetime, because the optics is an irremovable part of the chip. This eradicates safety hazard concerns associated with delaminating or malfunctioning optics. Third, the GaAs optics is more powerful, enabling new designs with superior efficiency. Fourth, new functionalities are possible, as more contacts are on the chip, enabling addressable segments. As these contacts are underneath the surface, the footprint remains small. Fifth, our ViBO technology ensures a longer product lifetime by eliminating additional interfaces. We have eradicated unreliable glue interfaces that threaten to cause problems during the product’s lifetime.

Figure 2. An exemplary ViBO array with the contact side on the left and the lens side on the right.

Yet another strength of our ViBO chips is that they have much in common with high-performance microelectronics. This includes the capability to integrate seamlessly with state-of-the-art silicon packaging technology.

The production of our ViBO chips is based on well-established, mass-manufacturing processes used in the semiconductor industry. We define the lens pattern with grey-tone lithography, using a wafer stepper. Thanks to the high accuracy of this approach, millions of lenses are aligned at the wafer level, rather than in subsequent production steps.

A regular lens pattern that’s designed for uniform illumination of a field-of-view on a scene is shown in Figure 3. Note that no further optics is needed. With this approach illumination fields can vary from the narrow, such as 20 ° by 20 °, to as wide as more than 100 °. It is also possible to tailor the intensity distribution within such a field, allowing more light to be directed towards notoriously dark corners.

Common within the semiconductor industry is bonding with copper pillars. For instance, they are used to create the densely packed connections of a microprocessor. ViBO technology draws on a similar approach (see Figure 3), using lithography to adjust the shape of the pillars. On top of the copper pillar is a solder depot, facilitating the assembly of the chip on ceramic and silicon interposers. Fine pitch patterns support designs with many zones, which can be addressed individually. Many individual VCSELs are grouped into a zone to provide a desired level of power. As the arrangements for the VCSELs and the contacts are independent, and may overlap, this gives more freedom. For example, it allows interlaced and addressing schemes.