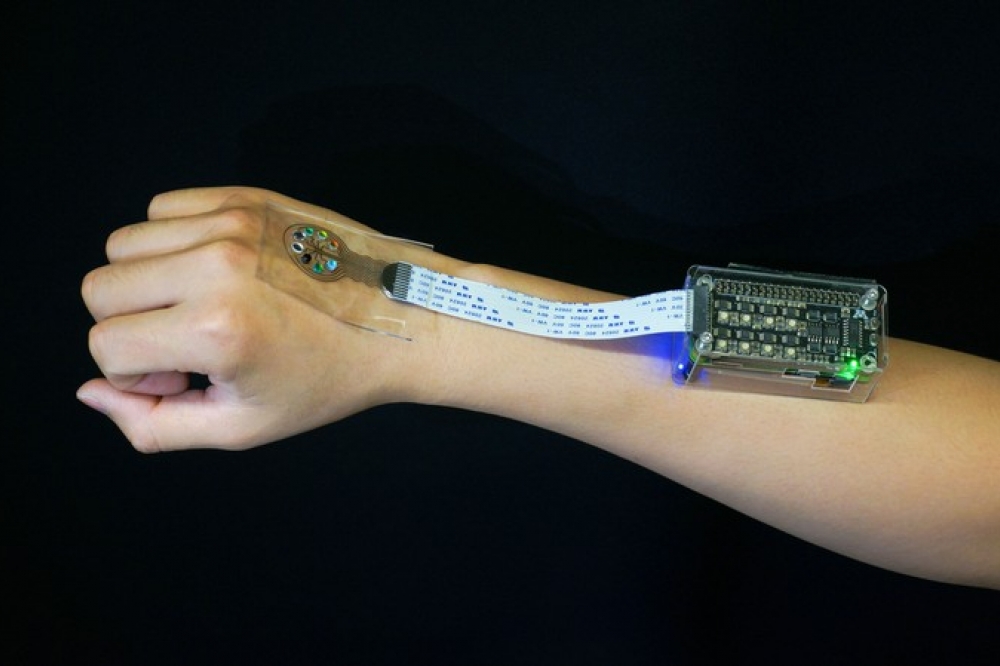 A team of engineers and doctors at the University of Minnesota Twin Cities have designed a 3D-printed light-sensing medical device that is placed directly on the skin and gives real-time feedback to correlate light exposure with disease flare-ups.

The device could help millions of people worldwide with lupus and other light-sensitive diseases by providing access to more personalised treatments and information to determine what causes their symptoms.

The fully 3D printed flexible UV-visible photodetector array incorporates a hybrid organic-inorganic material system. The active materials are formulated by doping polymeric photoactive materials with ZnO nanoparticles in order to improve the UV photoresponse and trigger a photomultiplication (PM) effect. The ability of a stand-alone skin-interfaced light intensity monitoring system to detect natural irradiance within the wavelength range of 310–650 nm for nearly 24 h is demonstrated.

The research '3D Printed Skin-Interfaced UV-Visible Hybrid Photodetectors' was published in Advanced Science. The researchers have also filed a patent on the device and the technology is available for licensing.

Wearable and skin-interfaced electronic devices that continuously monitor environmental signals in situ and thereby serve as real-time health-profiling strategies have the potential for mitigating the severity of environmentally-sensitive diseases.

Some skin diseases, such as lupus erythematosus (LE), an autoimmune disorder with characteristic skin and systemic manifestations, may be triggered or exacerbated via UV exposure from the sun or even ambient indoor light.

“I treat a lot of patients with lupus or related diseases, and clinically, it is challenging to predict when patients’ symptoms are going to flare,” said University of Minnesota Medical School dermatologist David Pearson and co-author of the study. “We know that ultraviolet light and, in some cases visible light, can cause flares of symptoms — both on their skin, as well as internally—but we don't always know what combinations of light wavelengths are contributing to the symptoms.”

Pearson had heard about the groundbreaking, customised 3D-printing of wearable devices developed by University of Minnesota mechanical engineering professor Michael McAlpine and his team and contacted him to collaborate on finding a solution for his problem.

McAlpine’s research group worked with Pearson to develop a first-of-its-kind fully 3D-printed device with a flexible UV-visible light detector that could be placed on the skin. The device is integrated with a custom-built portable console to continuously monitor and correlate light exposure to symptoms.

“This research builds upon our previous work where we developed a fully 3D printed light-emitting device, but this time instead of emitting light, it is receiving light,” said McAlpine, a co-author of the study. “The light is converted to electrical signals to measure it, which in the future can then be correlated with the patient’s symptoms flare ups.”

McAlpine and Pearson said the 3D-printing process is relatively low-cost and could someday provide easy, quick access to the device without the expensive fabrication processes of traditional devices.

“There is no other device like this right now with this potential for personalisation and such easy fabrication,” Pearson said. “The dream would be to have one of these 3D printers right in my office. I could see a patient and assess what light wavelengths we want to evaluate. Then I could just print it off for the patient and give it to them. It could be 100 percent personalised to their needs. That’s where the future of medicine is going.”