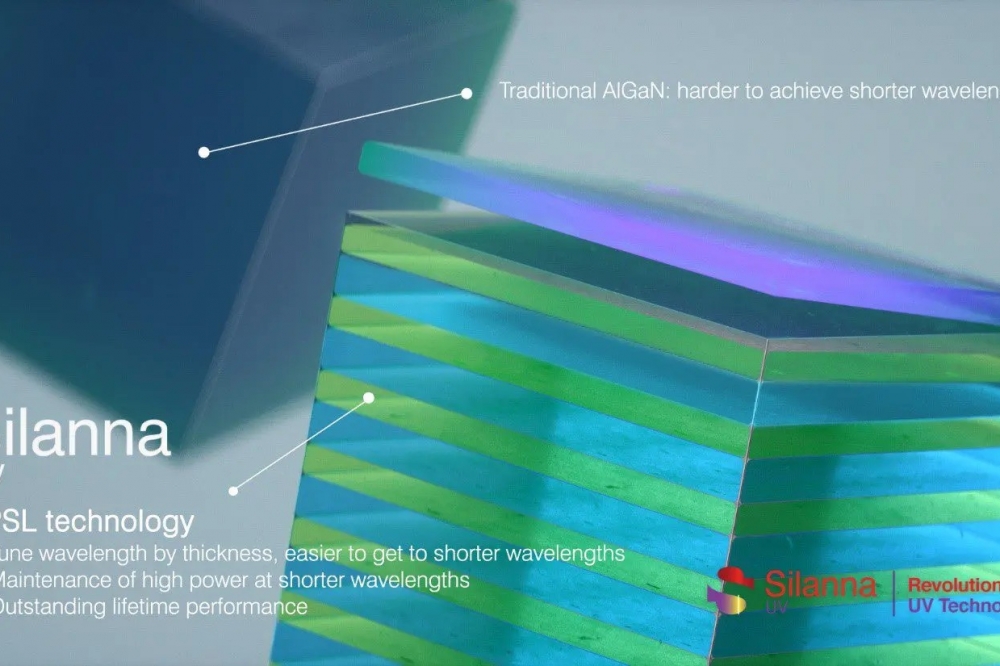 Silanna UV’s patented short period superlattice (SPSL) approach is said to overcome many of the difficulties that plague competing AlGaN UV-C LED technologies. In essence, Silanna UV has effectively created a new material, a nanostructure, which is much easier to control and has properties that are far superior to traditional AlGaN. The benefits for UV-C LED quality are revolutionary.

For years, UV-C LED manufacturers have relied on traditional AlGaN formulas. In theory, by adjusting the ratio of aluminum and gallium metal in the alloy lattice, the bandgap can be tuned to produce UV emissions from 340 nm to 210 nm, covering most of the UV spectrum.

But in reality, emission below 260nm require high Al-content AlGaN, which, unlike GaN, makes it very difficult to achieve desirable n and p-type doping, particularly at the shortest wavelengths, leading to poor electrical performance. High-Al content AlGaN also suffers from light extraction issues due to the polarization of emitted light, causing significant loss of light output, particularly in the far UV range below 240nm.

To overcome these problems in UV LEDs, Silanna UV uses new technology. Instead of the common AlGaN method, Silanna UV uses SPSL.In this approach, rather than using an old-fashioned ternary alloy, alternating layers of AlN and GaN (as many as several hundred layers) are meticulously built up to create a so-called SPSL.

Unlike a traditional ternary alloy, this SPSL’s key properties – including bandgap and conductivity – can be finely tuned by adjusting the thickness of the constituent layers. This means that the issues caused by High-Al content AlGaN are mitigated – in particular, that older method’s poor electrical characteristics and short wavelength light-loss.