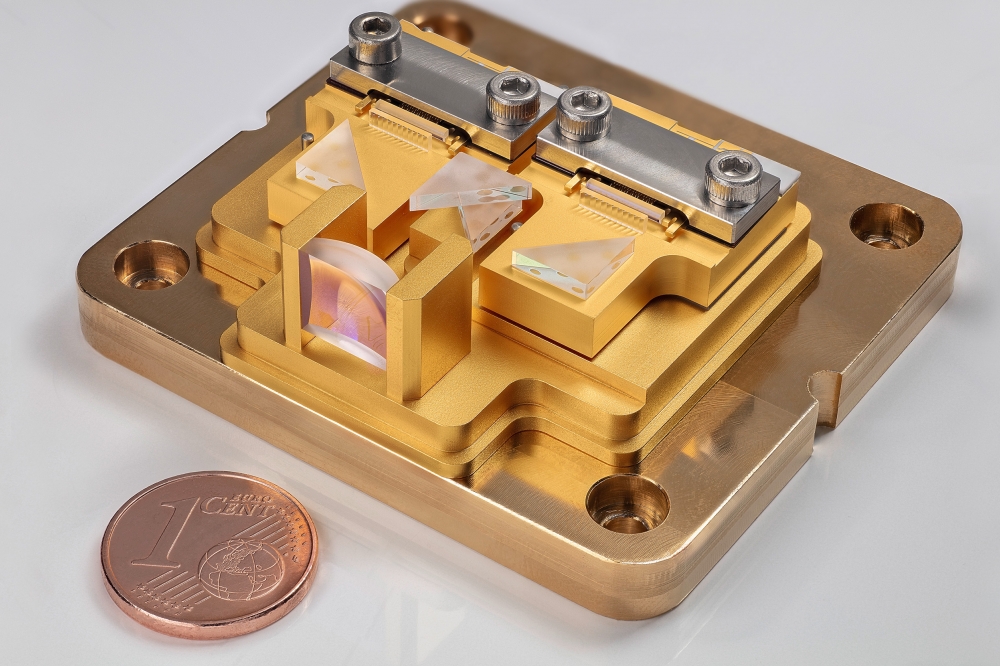 From November 15-17, 2022, the Berlin-based research institute Ferdinand-Braun-Institut (FBH) will present its developments at the Berlin-Brandenburg joint stand at at Space Tech Expo Europe in Bremen.

FBH has been developing III-V semiconductor-based devices and subsystems for space and satellite-based applications for many years, cooperating closely with international partners from research and industry, including projects funded by the European Space Agency (ESA) and the German Aerospace Center (DLR).

FBH's laser diode benches (LDB) are successfully used, among others, in Tesat-Spacecom's laser communication terminals (LCT). With them, high data volumes originating from Earth observation can be transmitted quickly between satellites and to Earth. The wavelength of the LDBs is stabilised exactly to the pump wavelength of the Nd:YAG laser and ensures stable LCT performance. The LDBs are designed and qualified according to ESA standards for space applications. They feature excellent reliability over the entire mission lifetime of 15 years.

FBH has also developed, qualified and supplied pump lasers for the MERLIN climate satellite, which will be measuring the methane concentration in the atmosphere. The modules are each equipped with two high-power laser half-bars delivering 130 W optical power at 808 nm in pulsed mode. The performance and reliability over the entire mission duration has been demonstrated by extensive technology qualifications and confirmed by ESA's Technology Center ESTEC.

For future space missions, FBH has additionally developed a novel DBR laser array module (pictured above). Thanks to an integrated chip-level Bragg reflector, it offers both low noise and high reliability. The suitability for continuous operation of more than 15 years has also been demonstrated for these modules.

Compact diode lasers and robust laser modules from FBH have been successfully used several times in sophisticated experiments under microgravity conditions. Among others, FBH is currently manufacturing 55 narrow-band laser modules developed for the BECCAL (Bose-Einstein Condensate – Cold Atom Laboratory) apparatus. They are to be used for quantum optical experiments with ultra-cold atoms on board the International Space Station ISS.

Core components of the modules are laser diodes developed at the institute, which are assembled together with optics and further passive elements with highest stability and precision.

FBH says its unique microintegration technology makes the modules extremely robust and ideally suited for use in space. In addition, the modules feature excellent parameters in terms of size, weight and performance: they deliver 500 mW in a single-mode fibre at > 20 percent conversion efficiency (electrical to optical) and offer a low intrinsic linewidth < 1 kHz.

The laser modules can be flexibly realised in the wavelength range from 630 nm to 1180 nm. Due to the increased demand for modules and subsystems with a variety of integrated functionalities, FBH is currently expanding its activities into an 'Aerospace Competence Centre'.

In close collaboration with Humboldt-Universität zu Berlin, such modules are also being built into compact quantum sensors and optical frequency references (OFR) for use in space. The Joint Lab demonstrated an autonomous frequency reference based on the D2 transition in rubidium. It achieved a 1 second instability of 1.4 x 10-12 within a volume of only about 400 ml. Such OFRs are promising candidates for global navigation satellite systems such as GPS. In addition, they are used in optical calibration and as absolute references in atom-based quantum technology.