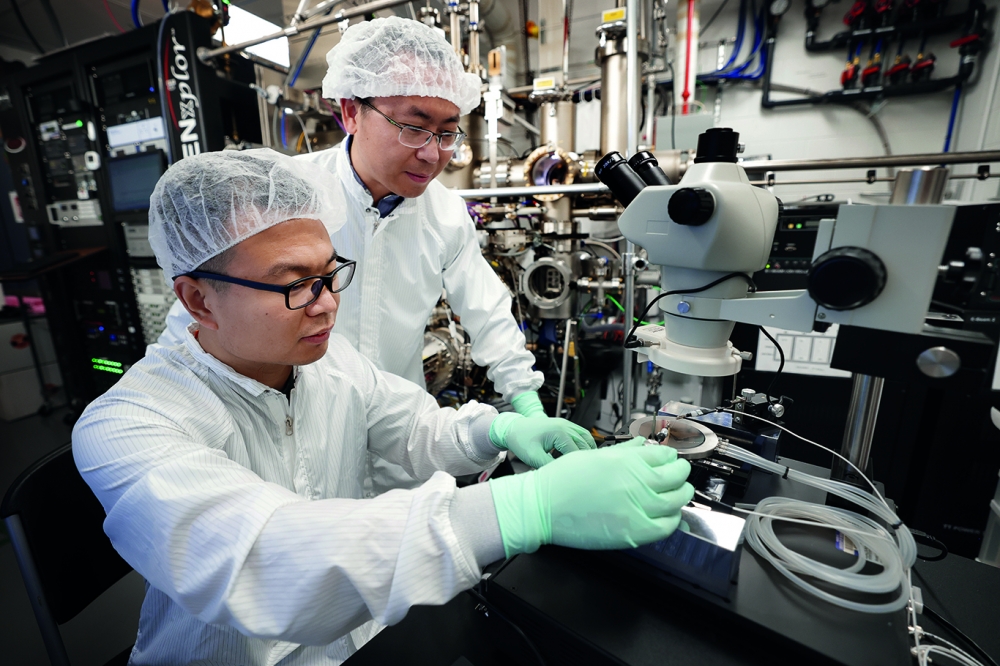 BY PING WANG, DING WANG AND ZETIAN MI FROM THE UNIVERSITY OF MICHIGAN

Ferroelectrics have a big part to play in tomorrow’s world. They are critical to the development of next-generation electronic, optoelectronic, acoustic and quantum devices. The desired characteristics are a high Curie temperature, a large electromechanical response, a large remnant polarization, a wide range tuneable operating voltage, a high crystalline quality and a compatibility with mainstream semiconductor technology. Ferroelectric materials with all those attributes can produce transistors, memristors, sensors, actuators, quantum switches and transducers operating at high powers, high frequencies, high efficiencies and high-speed, while drawing very little power.

Over the last few decades there has been significant advancement in the theoretical models, material synthesis and characterization of ferroelectrics. A key milestone came in 2011, with the discovery of ferroelectricity in doped HfO2. Since then, ferroelectrics have been taken more seriously, and have been integrated into some mainstream semiconductor manufacturing processes. However, the commercialization of HfO2-based devices has been held back by challenges associated with ferroelectric phase stability, an imprint issue, the wake-up effect and a high coercive field.

One promising class of piezoelectric material that is well known to all of us is AlN-based nitride semiconductors. They exhibit a strong spontaneous polarization along the c-axis, leading to two stable lattice states – metal-polar and nitrogen (N)-polar – with opposite polarization. In principle, these two states are electrically switchable via an intermediate metastable hexagonal phase. Unfortunately, due to the giant energy barrier between the wurtzite and hexagonal phases, this transition cannot happen without causing dielectric breakdown.

Despite this drawback, the spark of interest has not been extinguished. Twenty years ago, working independently, researchers in the US and Mexico predicted the existence of wurtzite-phase, scandium-based III-nitrides (Sc-III-N) with a distorted lattice. These calculations indicate that there is a chance to reduce the polarization switching energy barrier. Detailed theoretical studies have strengthened the case, but there is yet to be much experimental progress.

Realising ferroelectricity in nitride semiconductors is expected to unleash a significant revolution on the research of not only third-generation wide bandgap semiconductors, such as GaN, SiC and AlN, but also on ferroelectric materials in general. Spurred on by the abnormal enhancement of the piezoelectric response observed in ScAlN alloys by a team from the National Institute of Advanced Industrial Science and Technology, Japan, in 2009, much effort has been directed at exploring this alloy as the first candidate for providing ferroelectricity in nitride semiconductors.

In 2019 a German collaboration between the University of Kiel and the Fraunhofer Institute for Silicon Technology reported significant progress in ScAlN ferroelectrics. This partnership demonstrated ferroelectric polarization switching in sputtered polycrystalline ScAlN films, which possess a remnant polarization in excess of 100 µC cm-2 and a paraelectric transition temperature in excess of 600 °C.

Motivated by this success, funding programmes emerged almost immediately in several countries to support further research. From that point on, it’s been a race to see who could grow this class of ferroelectric semiconductors with a process that’s compatible with mainstream semiconductor technologies.

A fundamental building block to fulfilling this goal is the epitaxial growth of nitride ferroelectrics. MOCVD and MBE are obvious options, given their success in high-throughput growth of many III-nitride device structures, such as LEDs, laser diodes and HEMTs. However, the growth of Sc-III-N by either MOCVD or MBE is extremely challenging. Efforts have been underway since the turn of the millennium, with early studies tending to focus on the addition of scandium into GaN, due to the tuneable bandgap of ScGaN in the visible domain. Highlights include a report from Ohio University of wurtzite-like growth of a ScGaN alloy by MBE in 2004, and the finding by a team from Sandia National Laboratories of the incorporation of scandium in GaN at the doping level, realised by MOCVD and announced in 2009.

Due to a complicated phase diagram, epitaxial growth of crystalline ScAlN is more elusive than its ScGaN cousin. This challenge explains why the experimental growth of the later has only recently been reported. Initial success came from a team from the Naval Research Laboratory, reporting MBE growth of wurtzite phase ScAlN films in 2017. A German collaboration between the Fraunhofer Institute for Applied Solid State Physics IAF and INATECH – Albert-Ludwigs University Freiburg has claimed similar success, using an upgraded MOCVD system.

While these milestones are important, they did not ensure the demonstration of ferroelectricity in ScAlN. For that crucial breakthrough, success has recently come from our team at the University of Michigan. To succeed in that endeavour, we had to increase the breakdown field beyond the polarization switching field – that is, the coercive field. This move is critical to overcoming the switching energy barrier between metal-polar and N-polar lattice states.

For this work we selected MBE. It is an excellent technique for epitaxy of nitride semiconductors in an ultra-high vacuum environment, thanks to its high controllability of impurities, doping levels, interfaces, domain structure, lattice-polarity and so on. Crucially, it can enable full integration of nitride ferroelectrics with workhorse GaN and silicon technologies, as well as thickness scaling down to a single atomic layer.

The significant advantages of MBE over other epitaxial techniques has led our team to conduct several systematic investigations that span material growth to the demonstration of ferroelectricity and the development of a broad range of devices. Over the years we have accumulated rich experience surrounding the control of phase purity, crystal quality, impurity incorporation, interface quality and lattice-polarity. This expertise has provided a great foundation for realizing ferroelectricity in epitaxial, single-crystalline ScAlN films.

High-quality material is at the heart of fundamental material studies and practical device applications. Thanks to the tremendous freedom offered by a versatile MBE system, we can readily explore and optimize conditions for depositing single-crystalline, wurtzite-phase ScAlN with high crystal quality, atomically sharp interfaces, a high breakdown field and a controllable scandium content (see Figure 1 (a)).