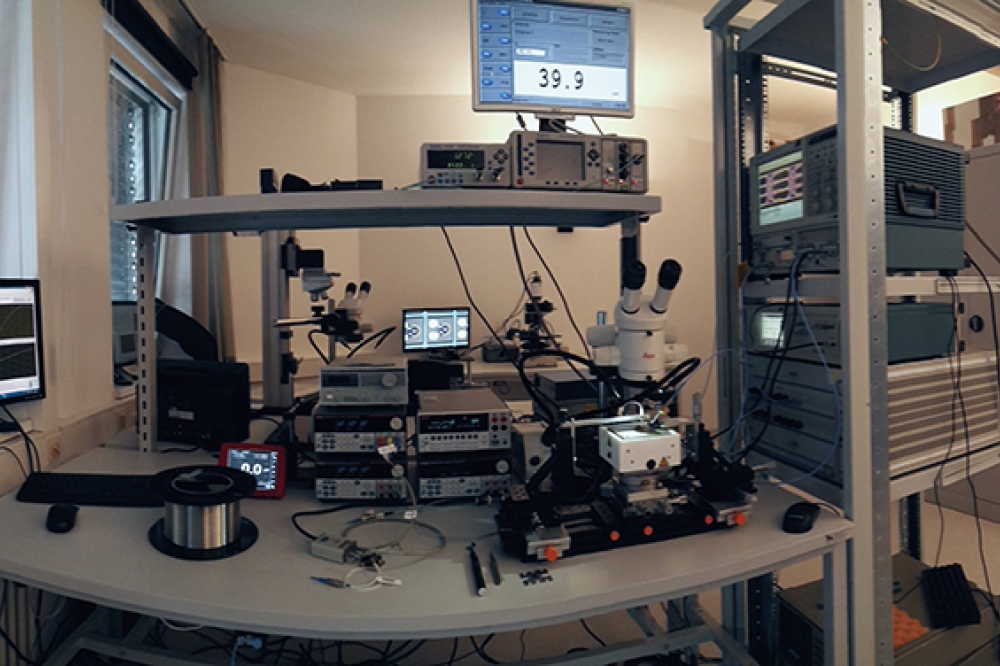 Arrays of VCSELs with oxide-confined apertures could speed data transmission rates to 400 Gbit/s or more, as well as creating single, powerful, coherent sources

OPPORTUNITIES AND CHALLENGES come from shrinking silicon transistors. On the plus side, the reduced dimensions enable more transistors to be packed into an IC without a hike in cost, leading to an increase in computational power. However, success may hinge on the introduction of a new device architecture that prevents leakage currents from getting out of hand, along with faster electrical interconnects - roughly every two years, there needs to be a doubling of their speed.

Today on-board signalling at 100 Gbit/s is in the final stage of standardization, while the standardization of 200 Gbit/s interfaces has already been started by the IEEE 802.3df 200 Gbit/s, 400 Gbit/s, 800 Gbit/s, and 1.6 Tbit/s Ethernet Task Force. Note that realising any increase in the data transmission rate is not trivial, with ramifications including rises in power dissipation and cross talk for electrical interconnects. To keep these issues at bay, the lengths of copper links have historically shrank by a factor of around four every decade.

An alternative approach to data transfer, which side-steps these issues, is to shift from the electrical domain to the optical domain. Efforts in this regard are already well underway, with optical interconnects playing a continuously increasing role in data communication systems, such as datacentres, enterprise networks and supercomputers. For distances of 100 m or less, the VCSEL is now the preferred optical source, deployed in multi-mode-fibre optical links that minimise cost and energy consumption.

Throughout its history, the normal method of operation for the VCSEL is direct modulation. Driven in this manner, increases in data rate demand an increase in the intrinsic modulation bandwidth, characterized by the resonant oscillation frequency. As the resonant oscillation frequency increases as the square root of the current density, there needs to be a four-fold hike in the current density to double the resonant oscillation frequency, assuming the same VCSEL design and gain medium. However, if such an increase in current density were adopted, that would slash the operational lifetime of the device and introduce thermal roll-over effects. Consequently, starting with the LED, the first source for multi-mode-fibre optical links, each milestone in bandwidth has come from the introduction of a novel design of the light emitter.

Speeding the VCSEL
More than a decade ago, our team members published a patent detailing the use of an anti-waveguiding VCSEL architecture to increase the modulation rate of this form of laser. Thanks to this modification, signalling rates were able to climb from 10 Gbaud, which is 10 Gbits/s in the case of on-off-coding, towards 50 Gbaud, needed for 100 Gbit/s in 4-level pulse-amplitude modulation. Our anti-waveguiding design suppressed light propagation in the lateral direction while enhancing the oscillator strength for the VCSEL transition.

When we introduced this architecture, we could realise a typical bandwidth of 30 GHz at current densities suitable for reliable VCSEL operation. Using this design, we laid the foundation for 100 Gbit/s links, which are now a basis for the upcoming generation of optical interconnects. It has been shown that this VCSEL can even deliver a data transmission rate of 224 Gbit/s per channel, by shifting to a discrete multi-tone modulation format.

On its own, a tremendous increase in data rate is of limited benefit. To be really useful, it must go hand-in-hand with maintaining the transmission distance over the multi-mode fibre, and increasing the average power of the VCSEL, so that there is no reduction in the power per pulse. By ensuring the latter, the source will match the sensitivity of the bandwidth-scaled receiver circuit.

Figure 1. 3D image of a single-mode VCSEL mini-array with 4 oxide-confined apertures. The lateral chip size is about 200 µm by 200 µm.

One of the key characteristics of a standard multi-mode VCSEL is its relatively large spectral width, typically around 0.6 nm. This high value leads to a significant impact of chromatic dispersion in the glass on pulse broadening, restricting the transmission distance over multi-mode fibre. At data rates of 100 Gbit/s, such pulse broadening is particularly an issue, once the fibre link is around 100 m or more. To transmit higher data rates over this distance, or to lengthen these fibre links to a kilometre or more, there needs to be a reduction in the spectral width of the VCSEL to 0.1 nm or less.

We have enjoyed some success on this front with multi-mode fibres, using single-mode VCSELs with small oxide-confined apertures. Our triumphs include 100 Gbit/s data transmission over 1 km using the PAM4 modulation format, and 50 Gbit/s non-return-to-zero transmission at distances of up to 2.2 km. However, with small apertures, it is challenging to produce output powers exceeding 2 mW within the required range of operation carrier temperatures, which extend to 85°C at long enough operation lifetimes.

Late last year we revealed that the limitations of modern VCSELs can be overcome by migrating from single sources to compact mini-arrays featuring small oxide-confined current apertures. The merits of such a device include a narrow spectral width, a high output power, low resistance and good reliability (see Figure 1). Armed with these attributes, this source can provide significant bandwidth scaling by applying the coherent interaction of optical modes at small aperture-to-aperture pitch sizes.

It is certainly not a new idea to transmit data down a multi-mode fibre using coherent emission from two-dimensional mini-arrays of apertures. Back in the late 1990s, one of our team members, Jörg-Reinhardt Kropp, filed a patent on this technology during his time at Infineon (US Patent 6785476).

More recently, we have reported another approach to making coherent VCSEL arrays. Our technology involves optical coupling between the neighbouring oxide-confined apertures through in-plane leaky emission, realised by either epitaxial design (US 10,243,330) or through surface-trapped optical modes (US 10,666,017).

Demonstrations of this latest technology included far-field patterns (a) and lasing spectra (b) of a mini-array made up of four single-mode VCSEL apertures. Driven at 10 mA, corresponding to a current density of 24 kA cm-2, the output power is 4 mW. The device produces a narrow far field with a full-width at half-maximum of just 12 °, and an optical spectrum that shows a quasi-single-mode character, with a side-mode suppression ratio of around 20 dB.

Figure 2. (a) Far-field pattern and (b) optical spectrum of a VCSEL with a 4× aperture mini-array under 10 mA drive current, equating to a current density of 24 kA cm-2.

We have obtained an 80 percent coupling efficiency into a standard OM3 fibre, due to the high brightness of the array. This efficiency is realised for single-mode-aperture mini-arrays, and for multi-mode-aperture mini arrays with larger apertures. An eye-diagram, using non-return to zero, highlights the high-quality data transmission using our VCSEL mini-array at 50 Gbaud with 3-tap feed-forward equalization (see Figure 3). The intrinsic optical modulation bandwidth of this device is defined as 30 GHz.

Creating coherent sources
When the aperture pitch size is as small as about 12 µm, this leads to a strong optical leakage-induced interaction between the array apertures, and results in coherent lasing of all the apertures. Operation in this manner creates a superstructure, exhibiting characteristics associated with the fundamental mode of a 2D array of coherent emitters (see Figure 4, which shows a far-field image of a mini-array in a single coherent optical state).

By developing coherent arrays of oxide-confined apertures that are free from external resonators and injection locking - and are capable of high-speed data transmission over substantial distances over multi-mode fibre - we have delivered a significant milestone for the VCSEL. Devices with these attributes deliver a strong increase in the brightness of the laser beam, accomplished by either applying conventional lenses to form Bessel-like beams, or by allowing arbitrary beam-shaping via diffraction lenses. Where necessary, single-mode fibre coupling can be realised.

It is possible to significantly extend the bandwidth of our source with additional aperture shape engineering and by increasing the interaction between optical modes between the apertures. When the wavelength splitting between the coherent modes of the array and the resulting photon-photon resonances reaches about 0.1 nm, the enhanced modulation bandwidth approaches around 70 GHz. We need to guide effort in this direction to realise this goal in a predictable, well-controlled manner.