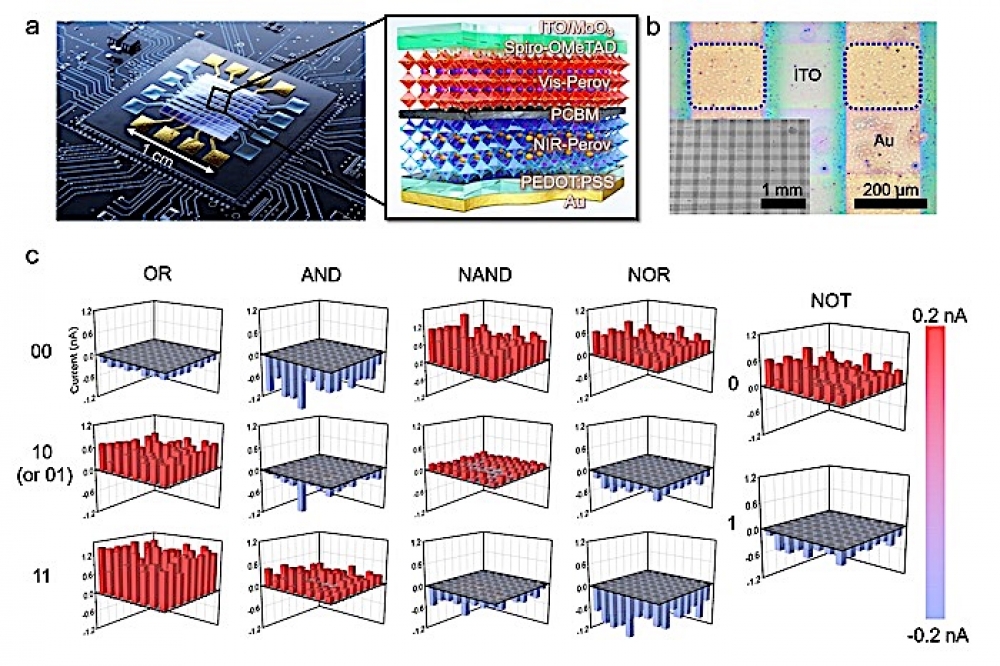 The optoelectronic logic gate uses light as an input signal which demonstrates low energy loss physically and can operate only with light energy without electrical power supply. The research teams implemented a stacked perovskite optoelectronic logic gate. Two layers of perovskite thin films are vertically stacked like a sandwich and proved that the desired binary logic operation is possible by inputting two lights of different wavelengths and intensities.

As the perovskite optoelectronic logic gate can freely change the photocurrent polarity using light, executing more than one logic gate operation result for the same input value is possible. Therefore, compared to the existing logic gate that can only perform one logical operation on one device, the newly developed one can implement all five different basic logic operations such as AND, OR, NAND, NOR, and NOT. It enables the development of optical processors with high spatial efficiency and integration, as one logic gate can function like five logic gates.

Yusin Pak at the Sensor System Research Centre (KIST) said: “Perovskite optoelectronic logic gates that execute multiple logic operations in response to optical input are expected to be used for ultra-small and low-power universal optical sensor platforms in the future.” Gun Young Jung at the School of Materials Science and Engineering (GIST) said she expected that: “The optoelectronic logic gate developed through this research is an outcome of optical computing R&D that realises five basic logic operations into one device, and will greatly contribute to next-generation optical communication, optical network, and healthcare R&D”.