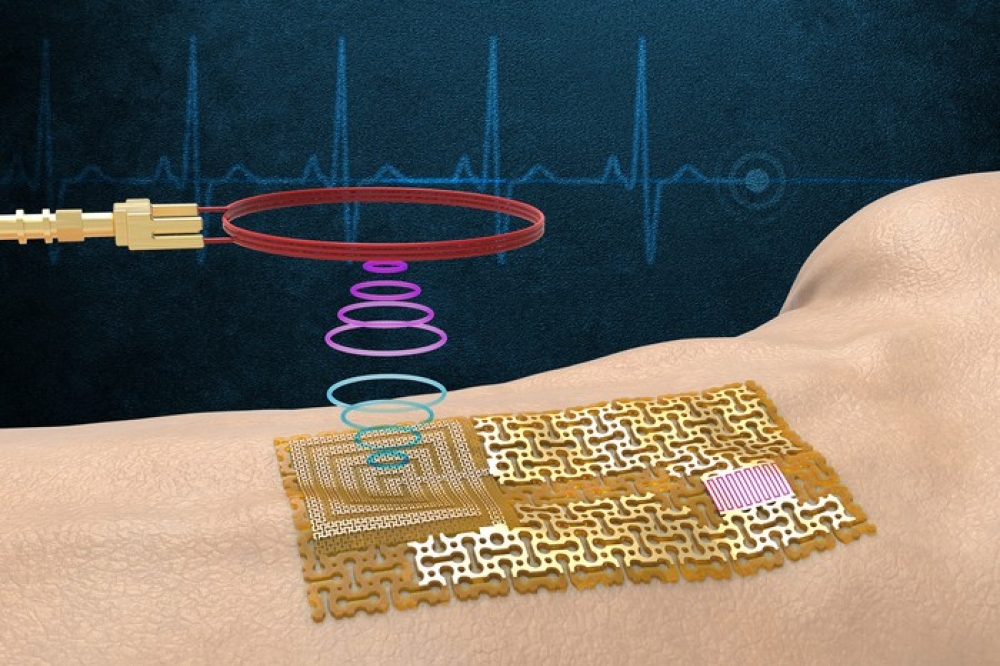 MIT engineers have devised a new kind of wearable sensor that communicates wirelessly without requiring onboard chips or batteries. Their design, detailed today in the journal Science, opens a path toward chip-free wireless sensors.

Described in the journal Science, the team’s sensor design is a form of e-skin — a flexible, semiconducting film that conforms to the skin like electronic Scotch tape. The heart of the sensor is an ultrathin, high-quality film of GaN, meaning that it can both produce an electrical signal in response to mechanical strain and mechanically vibrate in response to an electrical impulse.

The researchers found they could harness GaN’s two-way piezoelectric properties and use the material simultaneously for both sensing and wireless communication.

In their new study, the team produced pure, single-crystalline samples of GaN, which they paired with a conducting layer of gold to boost any incoming or outgoing electrical signal. They showed that the device was sensitive enough to vibrate in response to a person’s heartbeat, as well as the salt in their sweat, and that the material’s vibrations generated an electrical signal that could be read by a nearby receiver. In this way, the device was able to wirelessly transmit sensing information, without the need for a chip or battery.

“Chips require a lot of power, but our device could make a system very light without having any chips that are power-hungry,” says the study’s corresponding author, Jeehwan Kim, an associate professor of mechanical engineering and of materials science and engineering, and a principal investigator in the Research Laboratory of Electronics.

“You could put it on your body like a bandage, and paired with a wireless reader on your cellphone, you could wirelessly monitor your pulse, sweat, and other biological signals.”

Kim’s co-authors include first author and former MIT postdoc Yeongin Kim, who is now an assistant professor at the University of Cincinnati; co-corresponding author Jiyeon Han of the Korean cosmetics company AMOREPACIFIC, which helped motivate the current work; members of the Kim Research Group at MIT; and other collaborators at the University of Virginia, Washington University in St. Louis, and multiple institutions across South Korea.

Jeehwan Kim’s group previously developed a technique, called remote epitaxy, that they have employed to quickly grow and peel away ultrathin, high-quality semiconductors from wafers coated with graphene. Using this technique, they have fabricated and explored various flexible, multifunctional electronic films.

In their new study, the engineers used the same technique to peel away ultrathin single-crystalline films of GaN, which in its pure, defect-free form is a highly sensitive piezoelectric material.

The team looked to use a pure film of GaN as both a sensor and a wireless communicator of surface acoustic waves, which are essentially vibrations across the films. The patterns of these waves can indicate a person’s heart rate, or even more subtly, the presence of certain compounds on the skin, such as salt in sweat.

The researchers hypothesized that a GaN-based sensor, adhered to the skin, would have its own inherent, “resonant” vibration or frequency that the piezoelectric material would simultaneously convert into an electrical signal, the frequency of which a wireless receiver could register. Any change to the skin’s conditions, such as from an accelerated heart rate, would affect the sensor’s mechanical vibrations, and the electrical signal that it automatically transmits to the recever.

“If there is any change in the pulse, or chemicals in sweat, or even ultraviolet exposure to skin, all of this activity can change the pattern of surface acoustic waves on the gallium nitride film,” notes Yeongin Kim. “And the sensitivity of our film is so high that it can detect these changes.”

To test their idea, the researchers produced a thin film of pure, high-quality GaN and paired it with a layer of gold to boost the electrical signal. They deposited the gold in the pattern of repeating dumbbells — a lattice-like configuration that imparted some flexibility to the normally rigid metal.

They placed the new e-skin on volunteers’ wrists and necks, and used a simple antenna, held nearby, to wirelessly register the device’s frequency without physically contacting the sensor itself. The device was able to sense and wirelessly transmit changes in the surface acoustic waves of the gallium nitride on volunteers’ skin related to their heart rate.

The team also paired the device with a thin ion-sensing membrane — a material that selectively attracts a target ion, and in this case, sodium. With this enhancement, the device could sense and wireless transmit changing sodium levels as a volunteer held onto a heat pad and began to sweat.

The researchers see their results as a first step toward chip-free wireless sensors, and they envision that the current device could be paired with other selective membranes to monitor other vital biomarkers.

“We showed sodium sensing, but if you change the sensing membrane, you could detect any target biomarker, such as glucose, or cortisol related to stress levels,” says co-author and MIT postdoc Jun Min Suh. “It’s quite a versatile platform.”