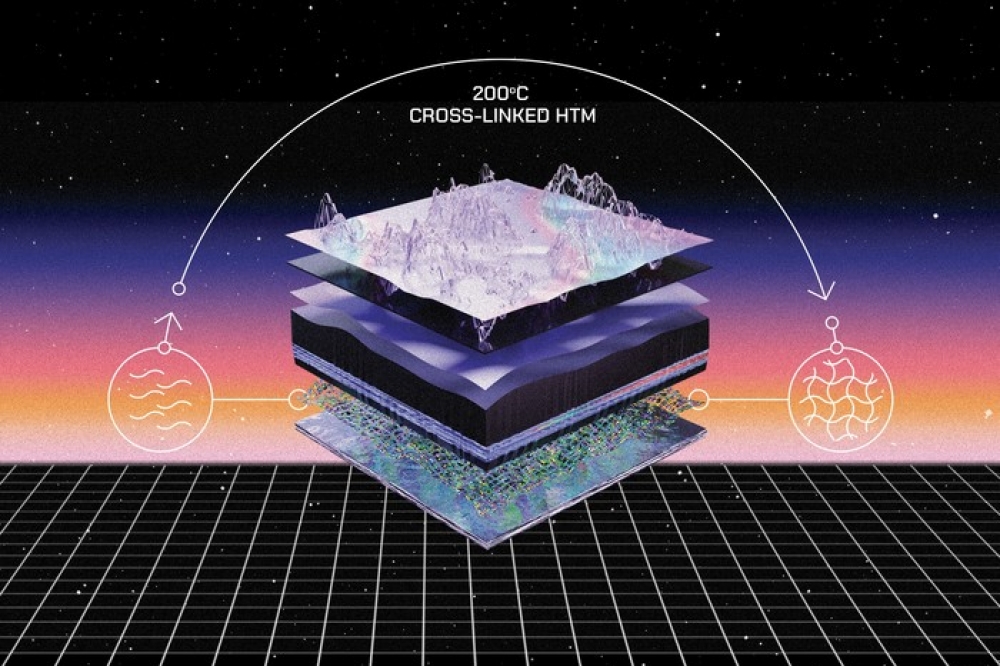 A group of chemists from Kaunas University of Technology in Lithuania, the authors of numerous breakthrough innovations in the solar energy field, proposed yet another solution to increase the stability and performance of perovskite solar elements. They synthesised a new class of carbazole-based cross-linkable materials, which are resistant to various environmental effects, including strong solvents used in the production of solar cells.

When applied as hole transporting layers, the new materials developed at Kaunas University of Technology (KTU) labs, helped achieve the 16.9 percent efficiency of the inverted-architecture perovskite cells at the first attempt. It is expected to reach higher efficiency upon optimisation.

Scientists all over the world are working to solve challenges related to improving the stability and other features of the perovskite solar elements. These layered, new generation solar cells can have two architectonic structures – regular (n-i-p) and inverted (p-i-n) structures. In the latter, the hole transporting materials are deposited under the perovskite absorber layer.

“Although p-i-n cells have numerous advantages when compared to the perovskite solar cells of regular architecture, they have serious shortcomings. For instance, the hole transporting compounds should be able to withstand the strong polar solvents used to form light-absorbing perovskite layer, which is placed above,” explains Vytautas Getautis, chief researcher at KTU Faculty of Chemical Technology.

To solve this problem, in p-i-n architectures polymers are often used as hole transporting materials. However, due to solubility issues, a polymer layer is not easy to form; moreover, it is difficult to control the recurrence of reactions and synthesise the same structure. Aiming to solve this issue, KTU researchers made a hole transporting layer of carbazole-based molecules, which then was thermally polymerised in situ to reach cross-linking effect.

“The cross-linked polymer has a three-dimensional structure. It is very resistant to various effects, including the strong solvents used while forming a light-absorbing perovskite layer. We used several groups of molecules and developed materials, which, while used as a hole transporting layer, can improve the efficiency of an inverted perovskite solar cell to almost 17 per cent,” says PhD student Šarūnė Daškevičiūtė-Gegužienė, who synthesised these compounds.

The research group headed by Getautis has developed numerous cutting-edge inventions, aimed at improving the efficiency of solar cells. Among them are synthesised compounds, which self-assemble into a molecule-thin layer that acts as a hole transporting material. The silicone-perovskite tandem solar produced using the said materials reached an efficiency of over 29 per cent. According to Getautis, the latter tandem combination will soon become the commercially available alternative to silicone-based solar cells – more efficient and cheaper.

“Our field of research aims to improve the existing technologies for perovskite solar elements and in this field, we have achieved the best results with the self-assembling-monolayer technology. However, science is often developed in multiple directions, as we need to explore ways to use solar energy the best we can,” says Getautis.