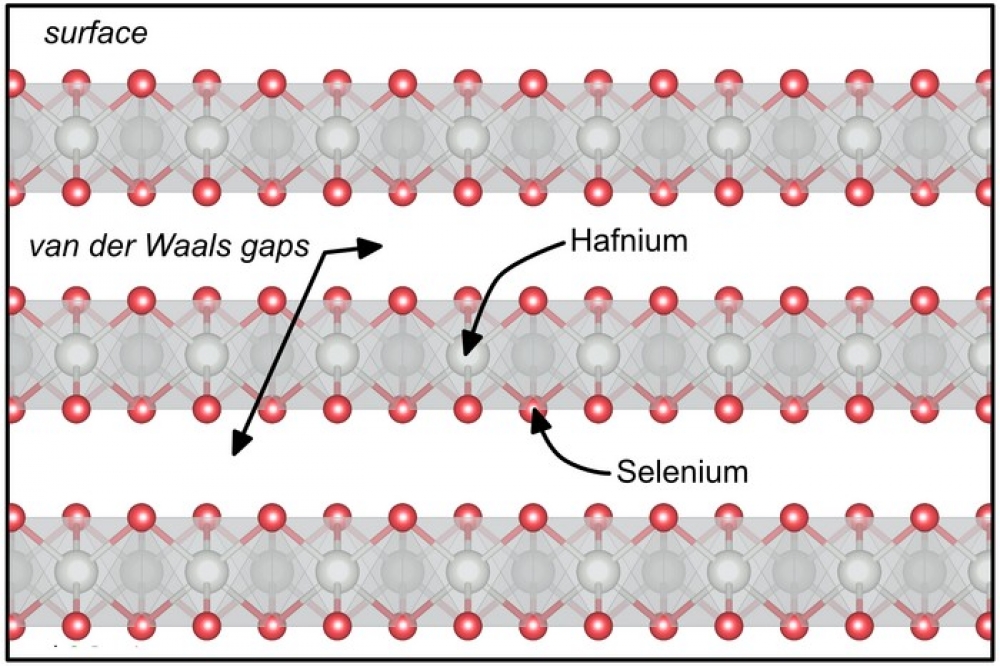 Could a novel property of HfSe2 provide a more convenient route to generate and control spin currents?

Spintronics promises to store or transport information based on spins alone, which would work faster with much less energy than today's electronic devices. Unfortunately it is still a challenge to control spin in a material by external fields reliably and at scale.

Now scientists at BESSY II, the third-generation synchrotron radiation source at HZB in Berlin, have unveiled a new property of the transition metal dichalcogenide (TMD) semiconductor HfSe2 that could lead to a more convenient route to generate and control spin currents. They published their results in Nature Communications in July 2022.

“In order to shift from electronics to spintronics, we have to find materials wherein spin up and spin down electrons behave differently”, first author Oliver Clark explains. There are two ways to do this, he points out: “We can either externally perturb the material so that electrons of different spins become functionally inequivalent, or we can use magnets where the electrons of opposite spins are functionally different intrinsically.”

For the first method, the difficulty lies in finding suitable pairings of materials and mechanisms by which spin control can be externally imposed. For example, in the 2H structured TMDs, one needs perfect single crystals and a circularly polarised light source. By contrast, the second method is much easier, but integrating magnets into devices is problematic for the operation of conventional electronic components, especially on small scales.

Linearly polarised light does do the trick

But between those two ways, a middle ground exists, at least for some select materials such as the semiconductor HfSe2:“If you probe this material with linearly-polarised light – which is easier to produce than circularly polarised light - the material acts as a magnet in terms of its spin-structure. So the spin-selectivity becomes very easy, but you do not have the problems associated with other magnetic properties”, Clark explains. The advantage: Crystal quality or orientation of the sample no longer matter.

This provides an entirely new route towards the generation of spin-polarised currents from transition metal dichalcogenides. The physicists are very excited about the implications of this work: “Our results are of relevance not only to physicists concerned with layered 2D materials, but as well to specialists in spintronic and opto-spintronic device fabrication”, Clark hopes.