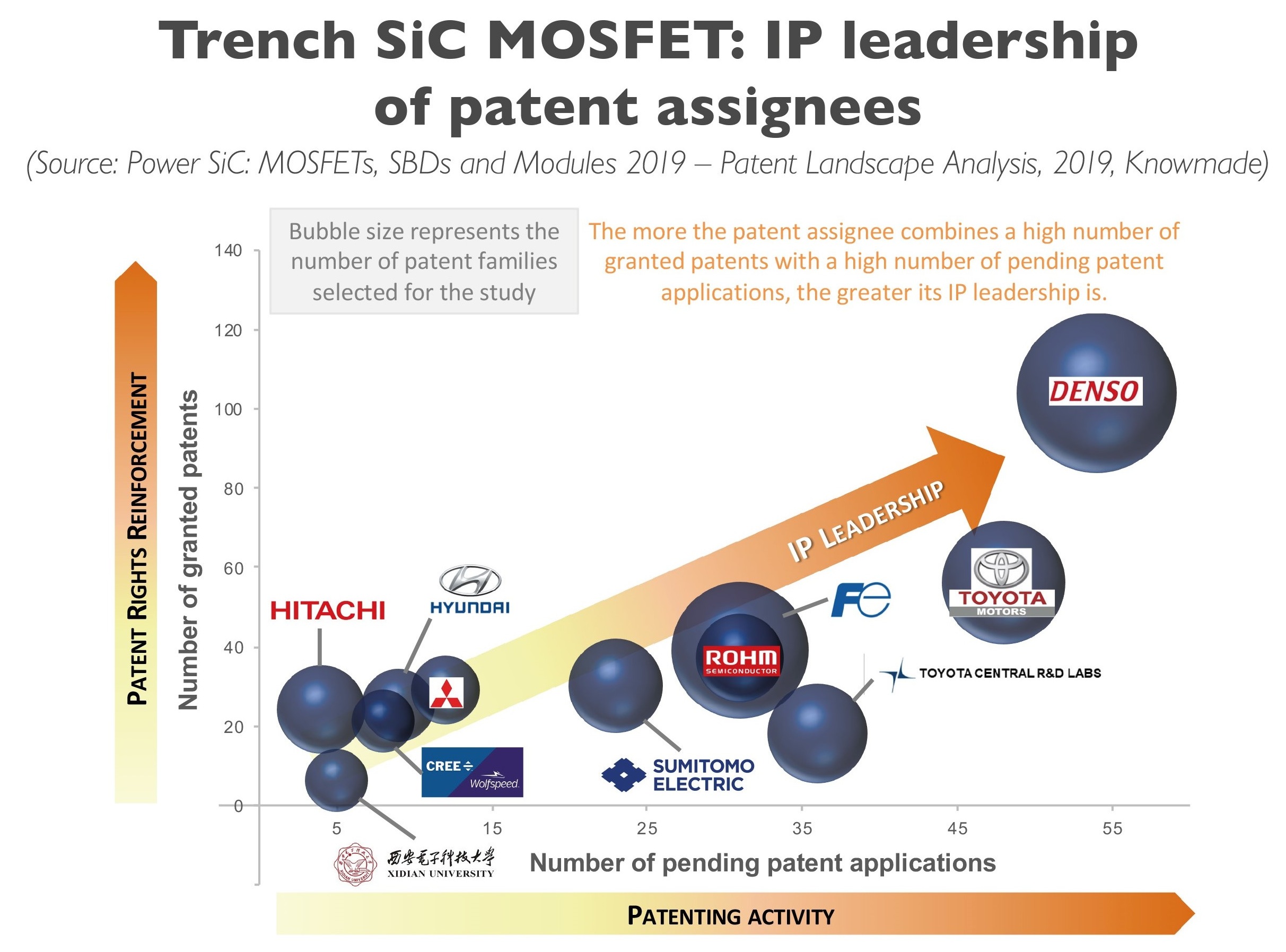 But is the industrial supply chain ready?

“The 2016-2018 period has been crucial for the whole SiC industry,” asserts Rémi Comyn, patent and technology analyst at Knowmade, the Technology Intelligence and IP strategy consulting company. “SiC MOSFETs, commercially available for several years, are gaining the confidence of numerous customers and have clearly begun to penetrate into different applications”.

The IP landscape confirms the trend with the strong leadership of the Japanese companies, the entrance of the Chinese players, as well as an impressive penetration rate within the automotive industry.

By 2018, Knowmade’s team was certain. The SiC market is going to grow. The question today is more on how big the market will grow in the next five years, than whether the market will increase. Yole Développement, sister company of Knowmade, predicts a $1.5 billion market in 2023, with a 31 percent CAGR between 2017 and 2023.

As a consequence, numerous players are wondering if the supply chain is ready to embrace such market acceleration. “Attracted by the market potential, there are plenty of players who want to enter the market together with heated competition from power device giants”, comments Hong Lin, senior technology and market analyst at Yole. "The competition has intensified”.

Knowmade identified a remarkable acceleration in patent filing related to SiC MOSFETs between 2011 and 2015, concomitant with the commercialisation of the first SiC MOSFET products. Japanese integrators, especially Denso and Fuji Electric, have taken the lead in SiC MOSFET related patenting activity.

In parallel, China has entered the SiC MOSFET patent landscape in recent years, starting with RandD players in 2011. These were followed by major state-owned integrator companies in 2015, such as State Grid Corporation of China (SGCC), CRRC and SiC pure player IDM Century Goldray, which was established in 2010 to address the whole power SiC supply chain. “The common feature of these new entrants is that they intend to develop IP on both planar and trench MOSFET structures”, explains Rémi Comyn from Knowmade.

In addition, Taiwan has a long-standing RandD player in SiC MOSFETs with ITRI, but there was no industrial player until 2016 when Hestia Power emerged, focusing on cost effective planar JBS diode-integrated MOSFET structures. “We note that current leading SiC device makers like Cree/Wolfspeed, Rohm, Infineon Technologies and STMicroelectonics own some key patents but do not necessarily have strong IP leadership,” adds Rémi.

As a consequence of this growth, the industrial SiC supply chain is constantly evolving. For power devices, the foundry and IDM model are both developing. Between 2017 and 2018, Yole’s analysts highlight the following trends:

The foundry model is clearly developing. This industry evolution is facilitating the SiC fab-less and fab-lite companies in launching SiC products and making the technology more accessible to the industry. Other foundries such as CLAS SIC wafer fab and Episil Technologies are also entering the market. “We now offer 4 inch SiC foundry services for 600V SBD and MOSFETs and are establishing a 6 inch SiC line, which can be ready for customer pilot production in the second half of 2019,” says Andy Chuang president Episil Technologies in an interview conducted by Yole and published on I-Micronews.com. As for the IDMs, the semiconductor giants are more and more active. Infineon Technologies ramped up MOSFET production in 2017. On Semiconductor and STMicroelectronics were also ramping up MOSFET production in 2018.

Both partners, Knowmade and Yole Développement, are part of the Yole Group of Companies. Together, they will once again take part in the SCAPE - Stockholm Conference on Applications of Power Electronics, in 2019. The conference takes place on May 13 and14 in Stockholm.