Getting PICs off the ground 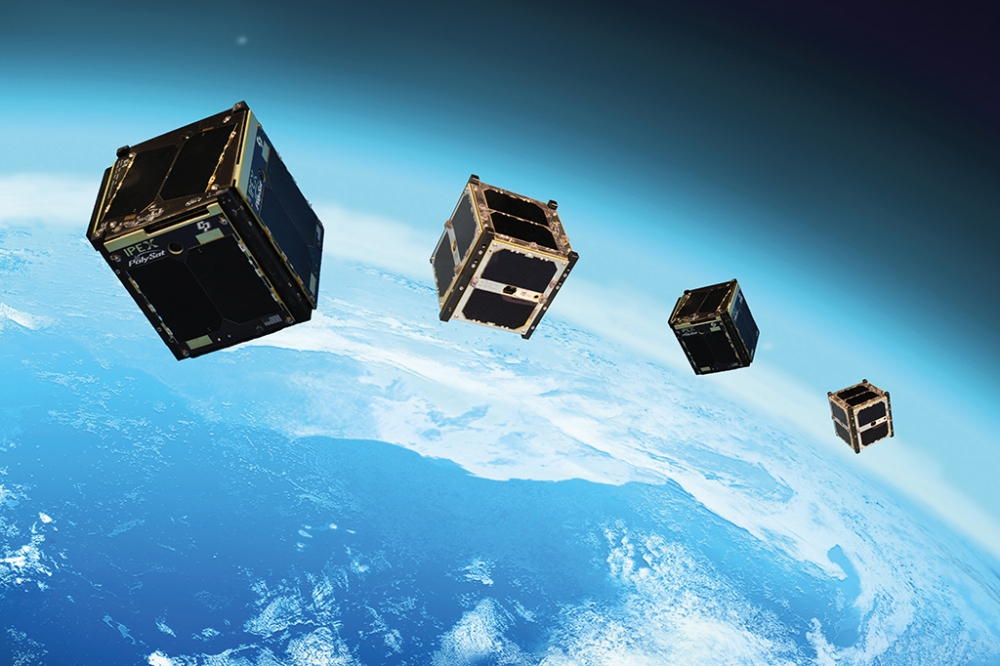 PICs based on InP and GaAs prepare to slash the size, weight and power of systems to be deployed in space and on-board aircraft for a variety of sensing applications

ONE OF THE MOST powerful technologies of our time is the photonic integrated circuit (PIC). By integrating all the required functions on a single chip, the PIC significantly reduces the cost, size, and weight at the system level, while improving performance, stability, and reliability.

To produce this multi-faceted photonic device, wafers are processed in a manner that is similar to that employed for the electronic circuits that have revolutionised our society. However, the materials that are used can be somewhat different. While silicon is the semiconductor of choice for making electronic circuits, those employing photonics can also be formed from InP and GaAs. Both these III-Vs are attractive options, because they enable monolithic integration of gain material for light sources and their amplification.

Pioneers of the PIC developed this technology with telecommunications applications in mind. They focused on the centre-band, or C-band, which spans the spectral range from 1530 nm to 1565 nm, a domain associated with ultra-low-loss transmission of light through an optical fibre. Recently, though, PICs have gained traction in applications involving the O-band (1260 nm to 1360 nm), such as optical interconnects within and between data centres.

Note, though, that the potential for PICs is not limited to these wavelengths, nor to communications, or even to terrestrial applications. There are opportunities lying well beyond these boundaries, such as those we are exploring at the University of California, Santa Barbara (UCSB). We are targeting space and airborne applications of PICs, namely free-space communications, remote lidar for gas sensing and topographical lidar. Our work on free-space communications has focused on extending the power-handling capabilities of InP PICs. Success on this front opens the door to higher data rates and/or longer link distances. Output powers with our InP PIC platform have exceeded 250 mW, a value far higher than any previous demonstration.

We have also broken new ground while participating in a NASA-funded project entitled IMPRESS Lidar – short for Integrated Micro-Photonics for Remote Earth Science Sensing Lidar. Through this project we have demonstrated the first ever fully functional PIC-based gas remote sensing lidar system that targets atmospheric CO2. This system operates near a relatively weak absorption line that is centred at 1572.335 nm, a wavelength falling within the communications L-band (1565-1625 nm) that allows us to leverage mature InP PIC technology. Through this project we have been able to demonstrate a shrinking of the system volume by a factor of more than one hundred, compared with a system built with discrete components by collaborators at NASA.

Another avenue explored by our team has been the development of a GaAs-based PIC, which extends operation to other spectral domains. This tuneable laser PIC, developed for 10XX nm wavelengths, features beam-steering capability when it is used in conjunction with diffractive optical elements.

Sensing gases with InP PICs
Our InP PIC platform, equipped with high-efficiency lasers, provides broad wavelength coverage across the 1.2 µm to 1.6 µm range. This platform is ideal for active remote sensing of CO2, which can be accomplished with a laser source at the sensing wavelength of 1572.335 nm, using a sensing window of 30 GHz. A PIC-based approach for CO2 sensing has many merits over the active remote sensing systems formed from commercial off-the-shelf optical components, which are compromised by their size, weight, and high power consumption. Usually, sensing experiments are performed from a near earth orbit, to minimise the high cost associated with launching large spacecraft into orbit. One of the strengths of our PIC technology, which has the potential to enable systems that are far more compact and power efficient, is that it could lead to increased deployment of this form of sensor on small spacecraft that launch more often.

Figure 2. (a) Simplified side-view schematic of an offset quantum-well PIC platform. Scanning electron microscopy images of (b) the top-view of fabricated gratings for the sampled grating distributed Bragg reflector (SGDBR) lasers, (c) cross-section of a fabricated ridge waveguide, (d) plan-view of two parallel waveguides, and (e) plan-view of a directional coupler with a 1 µm gap between the waveguides. (f) Top-view optical microscope image of a fully fabricated CO2 lidar PIC.

The PICs we produce are designed and fabricated with what we refer to as an offset quantum-well platform. We deposit multi-quantum wells on top of a low-loss waveguide core in such a way that the wells are slightly offset from the centre of the vertical optical mode. Taking this approach enables us to selectively remove the wells to form separate active and passive regions. Coupling between those regions is high, typically between 90 and 95 percent, with reflections managed by angled interfaces. The active regions, where wells remain, provide gain in laser cavities and optical amplifiers. Meanwhile, the passive regions, where wells are absent, contain mirrors, filters, phase-tuning elements and optical modulators, as well as interconnects between sections and components (see Figure 2(a) for a sideview of the offset quantum well PIC platform used for InP CO2 active sensor development).

To form our gratings, we etch into the waveguide core layer after defining active and passive regions. Adopting this approach enables us to form sampled grating distributed-Bragg-reflector (SGDBR) lasers, which provide leader and follower lasers for the active sensor. These lasers combine a gain section for generating photons with a back SGDBR mirror, a front SGDBR mirror, and a phase tuning section. As the sections of the laser are electrically isolated, each can be addressed separately. In addition to providing gain for a laser, active sections may also be used to form: a photodiode, which operates under reverse bias; and a semiconductor optical amplifier, operating under current injection. The amplifier can compensate for passive waveguide losses and boost the PIC output power.

Images acquired with a scanning electron microscope reveal the various elements during the fabrication process (see Figure 2 (b) to (e)). Even with an optical microscope, it is possible to identify the various components of a PIC designed to sense CO2 using lidar. This PIC, with a footprint of approximately 0.8 mm by 8.3 mm, employs passive waveguides and directional couplers to route optical signals and connect active and passive elements. After the leader laser is a directional coupler and a phase modulator, the latter of which stabilizes the laser. The follower laser is followed by a directional coupler and a semiconductor optical amplifier, incorporating a high-speed pad configuration that enables encoding of high extinction pulses. Directional couplers tap a fraction of the signals from the leader and follower lasers, routing the combination to a high-speed photodiode.