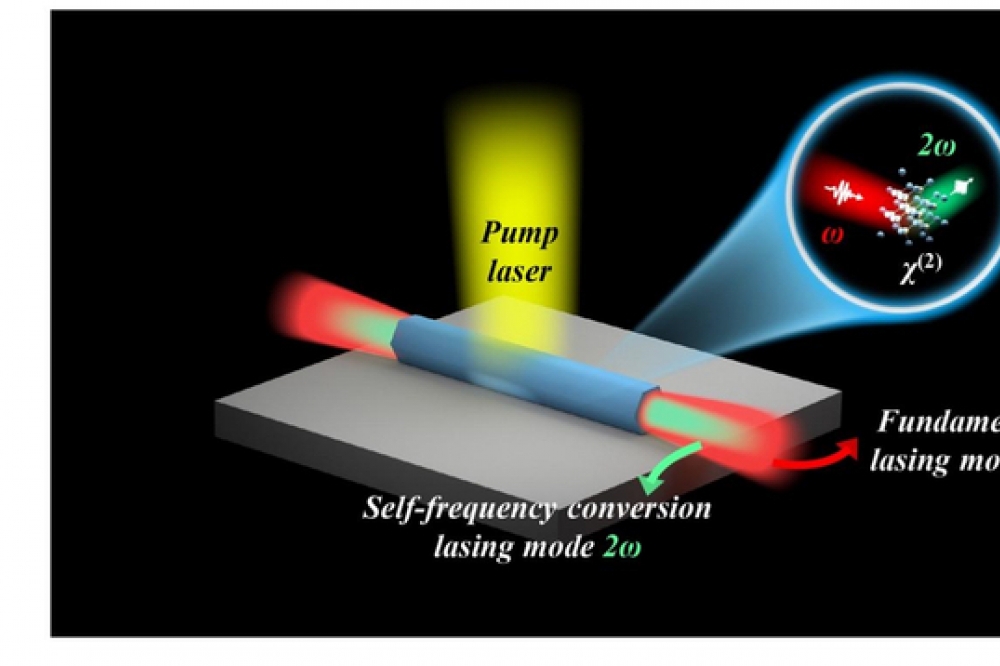 Nanowire lasers have been demonstrated in a variety of materials, such as III-V and II-VI compound semiconductors, and perovskites. And the introduction of quantum wells and quantum dots in nanowires can further reduce the lasing threshold and improve the temperature stability of nanowire lasers.

Unfortunately, there are still some awkward wavelengths that cannot be achieved from nanowire lasers. Although the emission peaks of semiconductor nanowire could theoretically be shifted over a broad range by controlling the alloy composition, there are many material-related challenges to the nanowire growth. For example, green InGaN nanowire lasers are still not realised due to the high density of dislocations in the high-indium content quantum well.

In a new paper published in Light Science & Application, Chinese scientists collaborating with Australian reseachers have proposed that the working wavelength of nanowire laser could be expanded by using the second-order nonlinear effect of nanowire crystal. However, unlike traditional solutions using an external non-linear crystal, the proposed solution exploits the high non-linearities of III-V nanowire itself and the strongly localised optical field within the laser cavity to achieve frequency conversion (as shown in Figure 1 above). And the second-order nonlinear optical processes could be self-realised effectively. Note, it is impractical to employ nanowire lasers as the source to pump another nonlinear crystal to achieve frequency conversion due to the low output power of nanowire lasers.

In their experiment, high-quality GaAs/In0.16Ga0.84As core/shell nanowires were grown by selective area epitaxy (SAE) method and transferred to a SiO2/Si substrate. The two flat end facets function as two parallel mirrors, and form a Fabry–Pérot cavity as the optical cavity for the laser. From a nanowire with a single lasing mode at 1016 nm, a strong visible lasing peak at 508 nm is also obtained. By analysing the far-field polarisation dependence with numerical modelling and the intensity dependence, it is confirmed that the visible laser mode at 508 nm is generated via doubling the frequency of the fundamental lasing mode (SHG), i.e., the self-frequency-conversion process.
Besides SHG, the second-order nonlinear effect of III-V nanowires also supports other three-wave mixing processes, which could also be used to extend the output wavelength of nanowire lasers. In the experiment, multimode lasing in near-infrared is demonstrated in a nanowire with larger diameter, and multiple lasing peaks are obtained in the visible wavelength range .

The authors believed that by exploiting the second nonlinear effect of the nanowires, the proposed self-frequency-conversion nanowire lasers provide a new path for expanding the working wavelength of these lasers, with potentially applications in optical parametric generators, amplifiers, and oscillators operating over a large wavelength range from deep ultraviolet to THz.