This article was originally featured in the edition: Volume 27 Issue 3 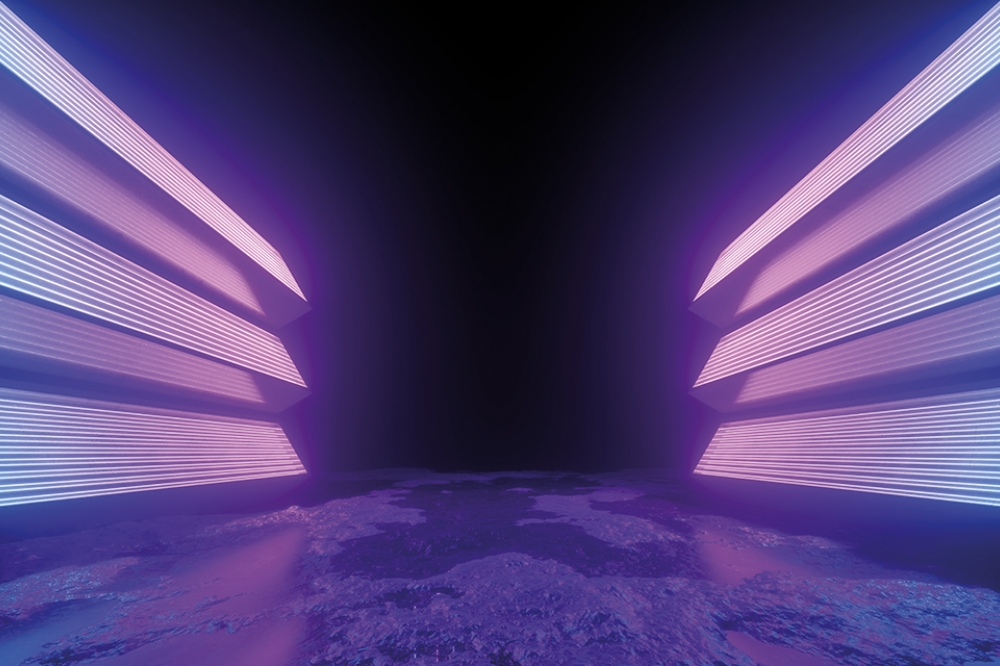 HOW DO YOU VIEW the deep-UV LED? It's easy to see this source as only a killer of viruses, and in particular Covid-19, now that the pandemic has been dominating our thoughts for more than a year. But the opportunities for this class of LED extend well beyond the purification of air, water and surfaces. This chip can also lie at the heart of systems sensing a range of gases, and provide the light source for non-line-of-sight communication.

For all these applications, the deep-UV LED has its pros and cons. Unlike the more traditional sources of emission in this spectral domain - the excimer lamps, and those based on the likes of mercury, deuterium and xenon - it is not fragile, bulky, or suffering for a short lifetime. But it's wall-plug efficiency is pitiful, trailing that of its blue cousin by a substantial margin, particularly when emission ducks below 250 nm.

With the deep-UV LED, there are so many barriers to a better performance. However, look at this situation in a more positive light, and you'll see that there are also so many opportunities to propel the performance to a new level. These options, discussed in detail at this year's SPIE Photonics West, include: reducing the defect density in the foundation, to prevent the active region from being riddled with a high degree of imperfections; increasing the internal quantum efficiency by improving the architecture of the light-emitting region; and delivering a hike in the proportion of light that exits the chip.

Which foundation?
A compromise is inevitable when selecting the foundation for the deep-UV LED. Bulk AlN minimises the defect density in the heterostructure, but it is pricey and availability limited. Consequently, developers and manufacturers of deep-UV LEDs tend to use a sapphire substrate, and employ growth technologies to drive down the defect densities in the epistructure. Quash defect densities as low as 108 cm-2 and internal quantum efficiency as high as 80-90 percent should be possible, assuming the absence of non-radiative defects.

Over the last few years Michael Kneissl's group from TU Berlin, Germany, have been working in collaboration within researchers at FBH to increase the material quality in AlN films grown on sapphire. Kneissl, who gave an invited talk at this year's Photonics West, explained that his group initially focused on growing a thin AlN film on sapphire, etching columns through the nitride and into the substrate, and applying overgrowth that caused AlN to coalesce. However, while this approach formed good films with a thickness of 5.5 μm, it was not ideal. “Patterning is time consuming and costly,” admitted Kneissl.

More recently, his team has turned to a low-cost approach pioneered by Hideto Miyake's group at Mie University, Japan. This method involves sputtering AlN on sapphire, before annealing the resulting template under nitrogen gas at 1700 °C. “After this three-hour anneal we observe a very significant reduction in threading dislocation density in the AlN layer,” explained Kneissl. These templates have a good morphology, with a threading dislocation density of 7.2 X 108 cm-2 realised in a 350 nm-thick film.

The latest approach by Kneissl and co-workers is to combine both techniques, forming an AlN-on-sapphire foundation by sputtering, annealing and overgrowth. This promises to lead to even lower dislocation densities. Results are encouraging, with samples produced by high-temperature annealing and epitaxial overgrowth providing the highest values for the internal quantum efficiency. Measurements suggest a value of almost 30 percent.

Kneissl said that encapsulated LEDs produced on this template emit at 265 nm, are capable of producing 54 mW at 350 mA, and have a peak external quantum efficiency of 3.7 percent. He believes that far higher values could be realised through the introduction of reflective contacts and a transparent p-side.

Facing together
The trailblazer of the sputtering and annealing approach, Miyake, also spoke at this year's Photonics West. His team form high-quality templates by sputtering AlN on sapphire and then taking pairs of AlN-on-sapphire epiwafers, placing their growth faces together, and annealing them under nitrogen at 1 atmosphere for between 10 minutes and 10 hours. “Typically we use 3 hours,” added Miyake.

To illustrate the dramatic improvement in crystalline quality wrought by annealing, Miyake presented X-ray diffraction data showing that the elevated temperature delivered a dramatic reduction in the diffraction peak width from 532 arcsec to 49 arcsec.

It is not easy to select the optimum annealing temperature, as several factors are at play. A study involving a series of 480 nm-thick AlN films, grown at a sputtering pressure of 0.05 Pa and temperatures ranging from 1650 °C to 1775 °C, revealed that higher temperatures had no impact on the width of the X-ray diffraction peak in the (0002) direction. However, for the (1012) direction, the peak's full-width at half maximum fell fr om over 170 arcsec to below 125 arcsec. Note, though, that this gain comes at the price of an increase in macroscopic defects. To minimise these imperfections, an alternative to dialling back the annealing temperature is to turn to a thicker film.

The benefits of a thicker film are quantified by plan-view scanning transmission electron microscopy images of a portfolio of sputtered films annealed at 1700 °C. For these samples, capped with an AlN layer between 0.8-2.8 μm thick that's been added by MOCVD, threading dislocation density falls from 1.1 x 109 cm-2 to 3.6 x 108 cm-2 when the thickness of the sputtered film is increased from 153 nm to 481 nm.

The team has also compared the characteristics of AlN films grown directly on sapphire by MOCVD, and those added by MOCVD to AlN-on-sapphire templates formed by sputtering and annealing. The latter leads to a far lower screw and mixed dislocation density - it is 2 x 106 cm-2, rather than 3 x 108 cm-2.


Figure 1. As the wavelength of the UV decreases, there is a tendency for
the external quantum efficiency to fall. This plot is provided by
Michael Kneissl from TU Berlin. It is an updated version of Figure 2
from the paper M. Kneissl et al. Nature Photonics 13 233 (2019)


While this lower density may appear a blessing at first glance, it brings its own problems. This is evident when comparing Nomarski microscope images of 1500 nm-thick films of Al0.74Ga0.26N grown by MOCVD on top of both structures. A relatively smooth surface results when this alloy is deposited on MOCVD-grown AlN-on-sapphire, but when it is grown on a template of sputtered and annealed AlN that has a layer of MOCVD grown AlN, the AlGaN is riddled with huge hillocks.

Miyake and co-workers have found that the origin of these hillocks is the spiral growth in the sputtered AlN templates. Due to the low density of screw and mixed-type dislocations, hillocks grow without interruption to a large size. In stark contrast, when there are many more screw and mixed type dislocations - this is the case in the epistructure featuring AlN growth on sapphire by MOCVD - there is interference associated with dislocation-induced spiral growth that creates a flatter surface (as illustrated in Figure 2).

Kenjiro Uesugi, one of Miyake's colleagues at Mie University, also gave a talk at Photonics West, which included a solution to the hillock issue. Uesugi presented images showing how the density of hillocks varies with an increase in the off-cut angle up to 1°, and remarked: “Increasing the substrate off-cut is quite effective for eliminating the hillock structures.”
To assess the impact of the offcut angle on the quality of the active region, the team from Mie University carried out a cathodoluminescence study on samples featuring quantum wells. Increasing the off-cut angle to 0.6° led to a more intense, narrower photoluminescence peak. But further increases in off-cut angle were not beneficial, resulting in a lower intensity of emission. “We speculate that this behaviour is owing to surface step bunching, and results in degradation of the multi-quantum wells,” argued Uesugi.

The researchers have considered various options for combatting the hillocks. Increasing the temperature eradicates them, but introduces point defects. A better option is to combine a lower growth rate with a high ammonia partial pressure, a step that suppresses excessive surface migration of gallium atoms. Drawing on all these tricks, the team have produced deep-UV LEDs on sapphire with a 0.6° offcut. MOCVD-grown layers were added in a Taiyo Nippon Sanso reactor, using a growth temperature of 1300 °C for the first AlN layer, before dropping the temperature to 1150 °C to grow the device layers.

Ultrathin wells
It is well known that the internal quantum efficiency of the active region of an LED is governed by the interplay between non-radiative and radiative processes. As the emission wavelength heads deeper into the UV, there is a decrease in the photoluminescence lifetime, which is the reciprocal of the non-radiative lifetime. This implies that non-radiative recombination increases at shorter wavelengths.

Working at Kyoto University, Japan, Mitsuru Funato and co-workers have measured the photoluminescence lifetime of quantum-well samples emitting at a range of wavelengths, formed on both sapphire and bulk AlN. Funato told delegates at Photonics West that despite these two classes of sample having markedly different threading defect densities, lifetimes are similar. This led him to believe that the major non-radiative recombination centres are point defects, rather than threading dislocations.

Many years ago, theorists calculated the formation energy for point defects in GaN and AlN. Based on these works, Funato is suggesting that the weakness in the AlGaN quantum wells is the point defect associated with aluminium. He is advocating the use of gallium-rich AlGaN quantum wells. There is much merit to this approach: the optical anisotropy in AlGaN hampers surface emission, which is strong in GaN, aiding light extraction efficiency.

To evaluate this conjecture, Funato and co-workers began by calculating the electron and hole wavefunctions in 1 nm-thick GaN quantum wells and 2 nm-thick AlGaN quantum wells, both sandwiched between AlN barriers and emitting at around 230 nm. The thinner wells had an electron-hole overlap of 0.7, compared with just 0.2 for the thicker variant.

Encouraged by this result, the researchers have gone on to grow ultra-thin GaN quantum wells. They are not the first to do this, but previous work has focused on an MBE-based approach. The team from Kyoto use MOCVD, realising very thin GaN quantum wells with a self-limiting process. Funato told the delegates at Photonics West that he thinks that the first monolayer of GaN stabilises on AlN, but when a second monolayer is added, it evaporates. The upshot is that the thickness of the quantum well is limited to a monolayer, thanks to a bond strength for GaN-on-AlN exceeding that for GaN-on-GaN. Evidence for such a thin well has come from a transmission electron microscopy cross-sectional high-resolution image that show a single monolayer of GaN sandwiched between AlN.

Photoluminescence measurements at a range of temperatures up to 300K have produced promising results. Temperature quenching is less suppressed in the GaN quantum well emitting at 300 nm than its thicker AlGaN cousin, implying a higher internal quantum efficiency. A room-temperature value of 5 percent is estimated for the GaN well, compared with 0.1 percent for the AlGaN variant.

Turning to time-resolved photoluminescence at room temperature has provided additional insight into the nature of the wells. The photoluminescence lifetime is 40 ps in the 1.5 nm-thick AlGaN quantum well, while it is 100 ps in the single monolayer GaN well, indicating that the latter is better at supressing non-radiative processes.

Deep UV dots
Another option for producing a deep-UV active region, outlined in a presentation by Julien Brault from CNRS-CRHEA in France, is to use AlGaN quantum dots. As these nanostructures provide a high level of spatial confinement for electrons and holes, there is the promise of realisation of a high quantum efficiency in samples with a relatively high defect density.

Working with reearchers at the University of Montpellier and Riber, Brault and his colleagues have produced and studied quantum dot samples that are grown by MBE using the Stranski-Krastanov growth mode. One of the primary goals of this research is to determine the growth condition for realising dots with high internal quantum efficiency.