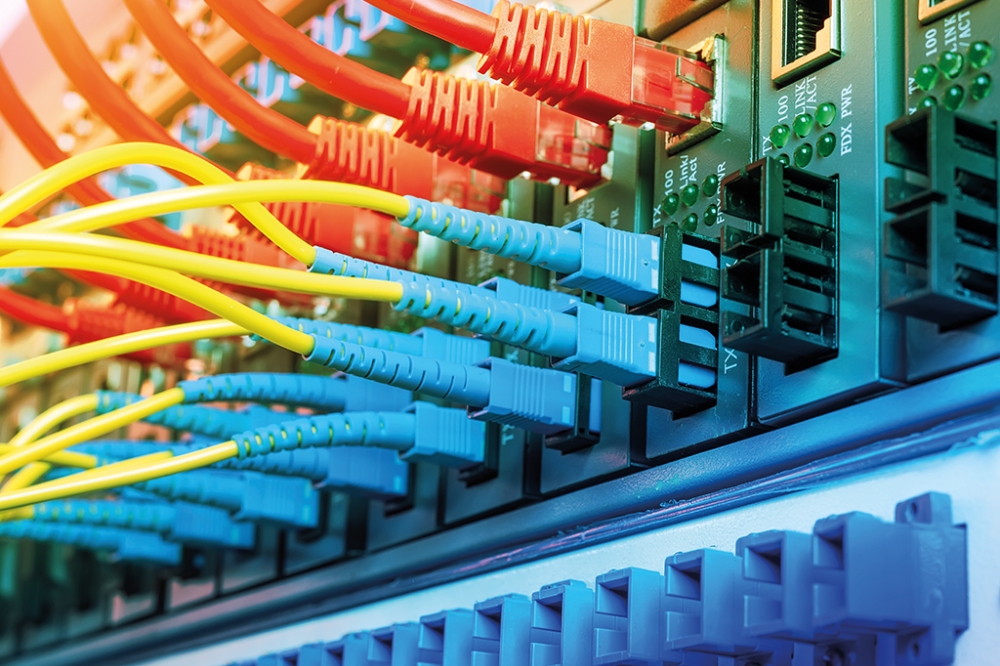 To meet the continued explosion of network traffic there has to be an expansion in capacity. Part of the solution is to introduce new components. They must cost no more than their predecessors, to prevent the budget from spiralling out of control; and they must minimise power consumption to keep down running costs and restrict the carbon footprint of optical infrastructure.

A particularly significant proportion of global network capacity is associated with the data traffic in data centres and 5G wireless networks. In response to a recent increase in demand, over the last few years designers of data centres have moved on from deploying optical transceivers for 100GbE, which can for example be formed from four lasers running at 26 Gbit/s, to 400GbE, a data rate that may be realized with four 106 Gbit/s lasers. For these 106 Gbit/s sources, 53-GBaud four-level pulse amplitude modulation (PAM4) has been widely adopted, enabling a transmission speed of 106 Gbit/s. PAM4 is expected to be utilized in optical transceivers in data centres, for example, in 400GBASE-DR4 or 400GBASE-FR4 in 400GbE. In addition, 106 Gbit/s PAM4 technology is being considered for 800GbE short-reach applications, such as 800G-PSM8, formed from eight lasers operating at 106 Gbit/s.

Figure 1. (a) The structure of a ridge-waveguide directly modulated laser. (b) Cross-sectional view

One very promising candidate for providing 106 Gbit/s lasers in these multi-wavelength transceivers is the directly modulated distributed-feedback (DFB) laser. Compared with alternatives, such as the electro-absorption modulator integrated DFB laser, it has many advantages, including a simple structure, a low driving current, a small size and cost effectiveness. What's more, the directly modulated DFB laser is advantageous from a thermal management perspective. In the preceding 100GbE era, this class of laser operated without thermoelectric cooler control over a wide temperature range - and the anticipation is that at 400GbE and beyond, it will continue to operate in uncooled setups while drawing very little power. Also, developers of directly modulated lasers for this application must consider the lasing wavelengths that will be required. For example, for the coarse wavelength-division multiplexing (CWDM) range for 400 GbE, four sources must span 1271 nm to 1331 nm and each emit at wavelengths slightly offset from one another.

Offering far more promise is the ridge-waveguide directly modulated laser. With the potential to provide a simple, easy-to-fabricate structures for uncooled 106 Gbit/s operation, it is an excellent candidate for ensuring high-volume production of cost-effective transceivers. However, success is not trivial, with innovation required to ensure an increase in bandwidth. Introducing external optical feedback can accomplish this, but it additionally requires external structures, so is not preferable.

Working with this restraint, our team from Lumentum, Japan, has developed ridge-waveguide directly modulated lasers operating at four different wavelengths within the CWDM range (see Figure 1(a)). To achieve a high bandwidth that enables 106 Gbit/s operation, our lasers exhibit a high relaxation oscillation frequency, even at elevated temperatures, thanks to their high differential gain and high optical-confinement factor. Drawing on these strengths, our transmitters are capable of producing clear 106 Gbit/s PAM4 eye openings from 25 °C to 85 °C.

We have also evaluated the transmission capabilities and the bit-error rate characteristics of these sources, considering links of 500 m and 2 km. Strong results from these investigations showcase the great potential of our lasers for making cost-effective transceivers with low power consumption and high data-transmission rates.

Figure 3. 106 Gbit/s PAM4 optical eye-diagrams of the four directly modulated lasers at 25 °C, 50 °C and 85 °C with drive currents of 50 mA, 60 mA and 85 mA, respectively. 106 Gbit/s PAM4 eye diagrams were evaluated by using a Keysight M8045A pattern generator to produce an electrical signal with a short-stress pattern, random quaternary test pattern. The directly modulated lasers were modulated at up to 35 mA peak-to-peak with a single-ended signal inputted through an RF amplifier. DC bias (Ib) was also applied via a bias tee just before an RF probe. Optical waveforms were detected by a Keysight N1092C sampling oscilloscope. The eye diagrams were measured with a 5-tap feed-forward equalizer in a back-to-back configuration. The outer extinction ratio, adjusted to 3.0 dB, was limited by a signal-voltage of the pattern generator output and the RF amplifier gain.

Speedy designs
Our latest devices draw on our previous lasers, namely the development of ridge-waveguide directly modulated lasers operating at 25 Gbit/s and 50 Gbit/s. Using this foundation, we have developed lasers that: are capable of higher speeds; emit at four different wavelengths; and feature a high differential gain and a high optical confinement factor.

Semiconductor multilayers of our lasers were epitaxially grown on n-type InP substrates by MOCVD. To ensure high-temperature operation, the photoluminescence wavelength for each lane targeted optimal wavelength detuning. By optimising the band structure of the InGaAlAs multi-quantum-well layers and the zinc doping, we realised a high differential gain, even at high temperatures. Contributing to optical confinement were the multi-quantum-well layers and the separate-confinement heterostructure layers - working together, they increased interaction between the electron and photon systems.

We devoted much thought to the design of our ridge-waveguide lasers. For all four lanes we have employed a cavity length of 150 µm and normalized coupling coefficients of around 2.0. We suppressed longitudinal spatial hole-burning with an asymmetric corrugation-pitch modulated grating. The grating pitches for our four directly modulated lasers were set to 195 nm, 198 nm, 202 nm and 205 nm, corresponding to the CWDM range, namely, 1271 nm (Lane 0), 1291 nm (Lane 1), 1311 nm (Lane 2) and 1331 nm (Lane 3). To complete device fabrication, we added a p-electrode pad on a buried organic insulator (this decreased parasitic capacitance and ultimately prevented high-frequency performance degradation); and we deposited anti-reflection and high-reflection coatings on the front and rear facets of our lasers.