Quantum dots can be bigger and better 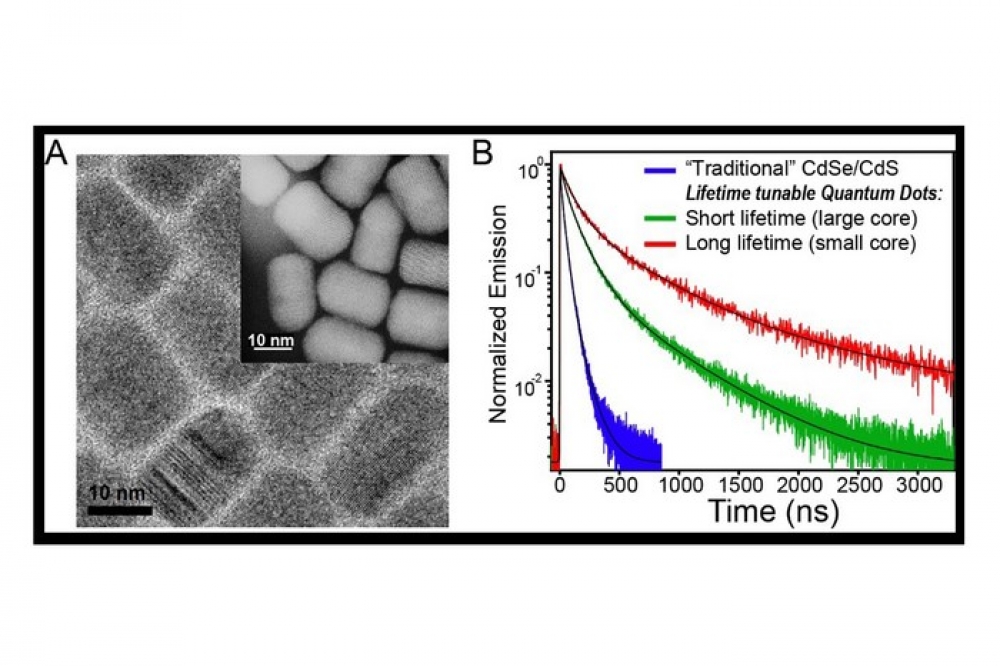 A new study involving researchers at the University of Illinois Chicago has achieved a milestone in the synthesis of multifunctional photonic nanomaterials.

In a paper published in the American Chemical Society’s journal Nano Letters, they report the synthesis of compound semiconductor 'giant' core-shell quantum dots with record-breaking emissive lifetimes. In addition, the lifetimes can be tuned by making a simple alteration to the material’s internal structure.

The group, which included collaborators from Princeton University and Pennsylvania State University, demonstrated a new structure-property concept that imparts the ability to spatially localize electrons or holes within a core/shell heterostructure by tuning the charge carrier’s kinetic energy on a parabolic potential energy surface.

According to UIC chemist Preston Snee, this charge carrier separation results in extended radiative lifetimes and in continuous emission at the single-nanoparticle level.

“These properties enable new applications for optics, facilitate novel approaches such as time-gated single-particle imaging and create inroads for the development of other new advanced materials,” said Snee, UIC associate professor of chemistry and the study’s senior co-author.

Snee and the study’s first author, Marcell Pálmai, UIC postdoctoral research associate in chemistry, teamed with Haw Yang of Princeton and others to excite the quantum dots particle with light to put it in the 'exciton' state. The exciton is an electron/hole charge pair, and in the new materials, the electron becomes displaced from the centre to the shell, where it becomes trapped for upwards of 500 nanoseconds, which represents the record for such nanomaterials.

“As emissive materials, quantum dots hold the promise of creating more energy-efficient displays and can be used as fluorescent probes for biomedical research due to their highly robust optical properties. They are 10 times to 100 times more absorptive than organic dyes and are nearly impervious to photobleaching, which is why they are used in the new Samsung QLED-TV,” they write.

These new particles have great efficacy for fundamental biological discovery, according to the researchers.

The quantum dots presented in their paper emit at red wavelengths, which minimises scattering, while the long lifetimes allow for biological imaging to be performed with less background noise. At the single particle level, the new quantum dots emit continuously, so a research scientist can tag proteins relevant to cancer and follow the biological dynamics without losing track of the signal which is currently a common problem with such studies.

In future research, the group plans to demonstrate that the materials make good components for optical devices such as micron-sized lasers.