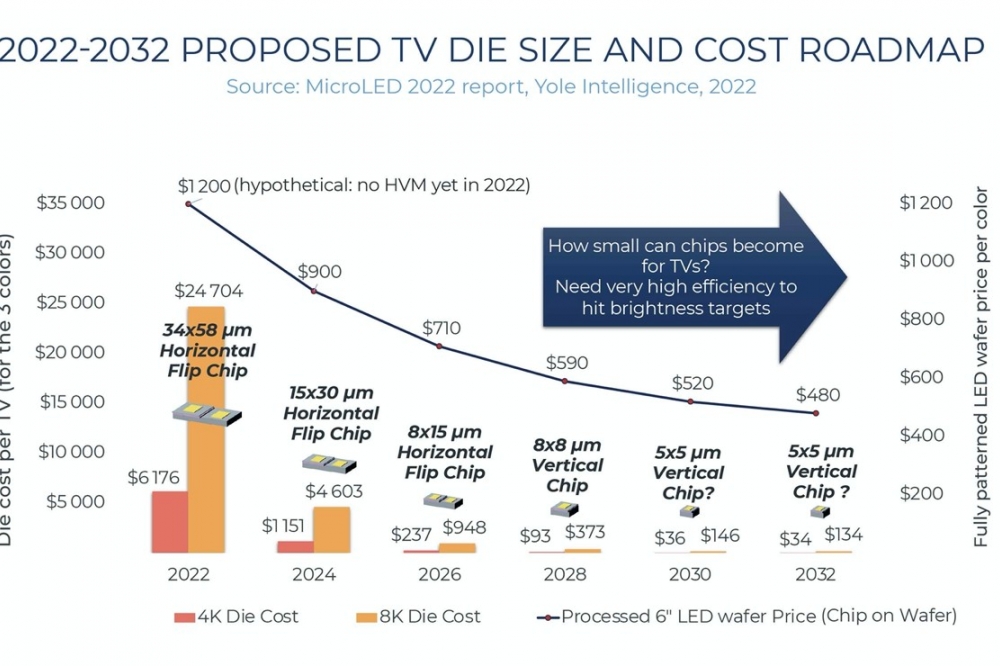 Apple, Osram, AUO, Ennostar, JBD, Aledia, and others are all investing in microLED manufacturing, while Apple and its partners are sending a strong signal by investing more than $2 billion in smartwatch display production. This includes €800 million by Ams-Osram alone for an 8 inch microLED chip fab.

Eric Virey, senior market and technology Analyst at Yole Intelligence said: “This will be an incubator for the industry and Apple in particular, with unique opportunities to close technical gaps, iron out the supply chain, and, if successful, push toward smartphones or tablets.”

Success would give the industry a substantial confidence boost and jump-start the supply chain: Ams-Osram could also serve non-Apple products such as TVs or automotive and become a high-performance, cost-effective, microLED die source for companies that would otherwise not be able to develop their own supply chain.

MicroLED, however, has but a few champions. Failure of Apple’s production ramp or Samsung VD halting TV efforts could bring the industry to a halt. Without TVs, watches, or smartphones to drive investments, smaller players will find it challenging to build supply chains at a meaningful scale for automotive and specialty displays alone. The situation is different for microdisplays, where more than 20 companies are competing.

Apple plans to start producing smartwatch microLED displays in 2024, an aggressive timing: nobody has ever produced LED or microLED on 8” sapphire and GaAs. Any ramp schedule slip could mean missing Apple’s usual September launch and pushing it to 2025.

Zine Bouhamri, team lead analyst, Imaging & Display activities at Yole Intelligence said: “MicroLED micro-displays have already found their way into various AR products. Efficiency at the display and optic levels, as well as full colour, remain challenging, though. However, there is no rush: AR is still searching for a strong use case for consumer adoption and faces many challenges besides displays, including cost, power usage, processing bandwidth, aspect, social acceptance, etc.”

Notorious for lengthy and stringent qualification processes, automotive is another major thrust area. Automakers are expressing genuine interest and evaluating prototypes. PlayNitride, AUO, and Tianma are pushing strongly and hoping for general adoption by 2027.

Success on the TV side depends on Samsung’s will and ability to reduce costs dramatically. Meaningful volumes are unlikely before 2027, at the earliest. Smartphone remains elusive. Apple’s success with the smartwatch is a necessary condition and would breathe new hope into this application.

Display makers, OEMs, startups, and equipment makers have collectively spent close to $8 billion on microLED development. Acquisitions add another $1.7 billion, including Google snatching Raxium and Jasper for more than $1 billion. PlayNitride conducted the first microLED IPO in 2022. Leading panel makers and OEMs in China have formed alliances with LED makers, with BOE bucking the trend by taking control of HC Semitek.

A new wave of spending driven by manufacturing infrastructure will bring the cumulated microLED effort to about $18 billion by 2025. This pales in comparison with OLEDs’ more than $150 billion Capex since 2006 but shows microLED momentum is accelerating.

Until 2020, a company willing to develop microLED displays had to invent its own mass transfer process. In 2022, however, more than a dozen equipment makers are now offering microLED-dedicated tools. Their availability is ushering the industry into a virtuous cycle, both lowering the barrier to entry and enabling shorter development cycles. For other manufacturing steps, microLEDs leverage existing equipment and technologies from the display, semiconductor, and LED industries.