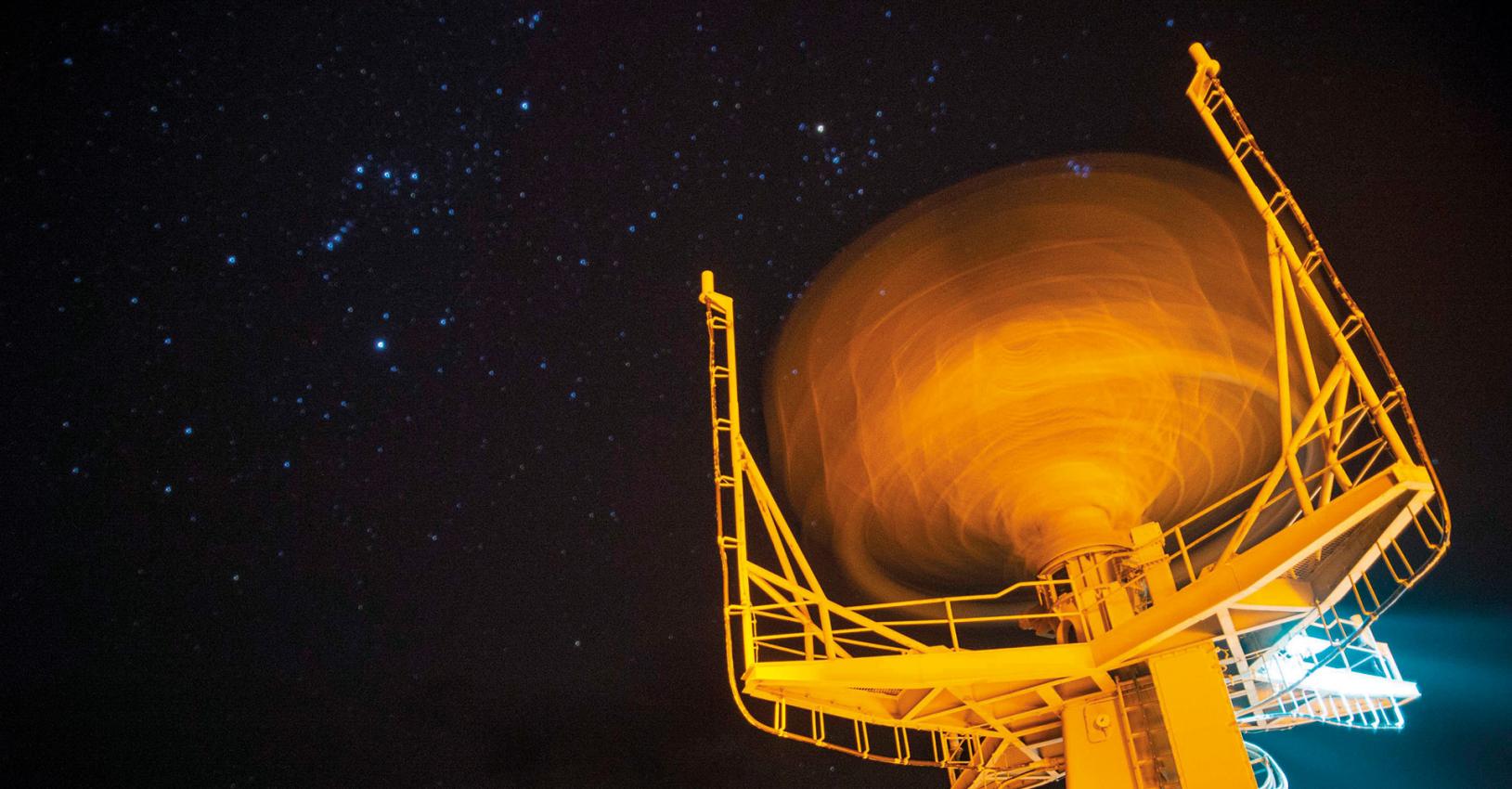 Delivering record efficiencies in the Q-band, MMICs made from InP HBTs are the ideal choice for phased-array radar

THE DEVELOPMENT of radar can be traced back as far as the late nineteenth century, to a time when German physicist Heinrich Hertz first demonstrated the reflection of radio waves by metallic objects. Exploiting this observation, engineers in the early twentieth century built a growing number of radar systems. While representing a staggering achievement, this traditional design has its downsides: it is bulky; and it takes time to re-orientate the direction of the beam, due to mechanical steering.

Addressing these weaknesses is the more recent phased-array radar, which features electronic synthesis of the beam. By adjusting the phase of the signal transmitted out of each element, it is possible to dial in the desired radiation pattern. 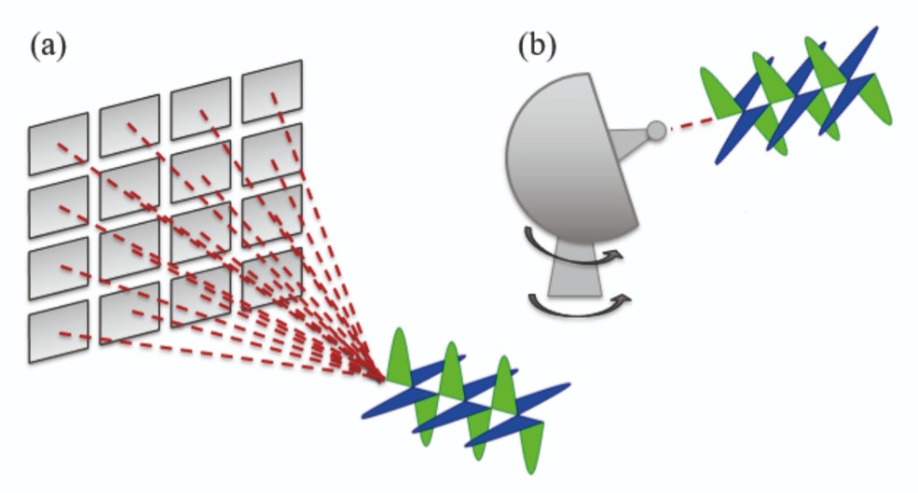 Figure 1. A 16-element phase-arrayed radar (a) and a conventional mechanically steered radar (b).

Lying at the heart of a phase-arrayed radar are full receiver and transmitter units, each equipped with an RF amplifier and antenna. First-generation units were constructed with silicon-based technology – more than a decade ago a team from Caltech broke new ground by demonstrating silicon-based phased array receivers with 8 elements, operating at 24 GHz.

However, more recently, due to demand for phased-array radar operating in the millimeter-wave – that is, above 30 GHz – new materials have been introduced, to cater for greater demands placed on the chip technology. As the frequency increases, the size of the chip must shrink, due to considerations associated with the element spacing due to the shorter wavelength of the radar technology. This leads to the need for a higher RF output power density per unit chip, and a high efficiency that ensures a safe semiconductor device operating junction temperature and ultimately reliable operation.

The key to meeting all these criteria is to switch from using silicon-based devices to those based on III-Vs. At frequencies above 30 GHz, compound semiconductor devices are setting new benchmarks for: power density, judged in terms of Watts per chip area; raw power, measured in Watts; and efficiency for a given bandwidth. It is for this reason that our team from Teledyne Scientific and Imaging are developing phased-array technology based on InP HBTs, which we have used to make MMICs operating at 47 GHz with record power-added efficiency (PAE). We have selected this particular III-V because it has a high carrier mobility, and a higher bandgap than silicon and SiGe, attributes that enable high-voltage handling and a very high power gain at microwave frequencies – amongst the highest for any semiconductor system. 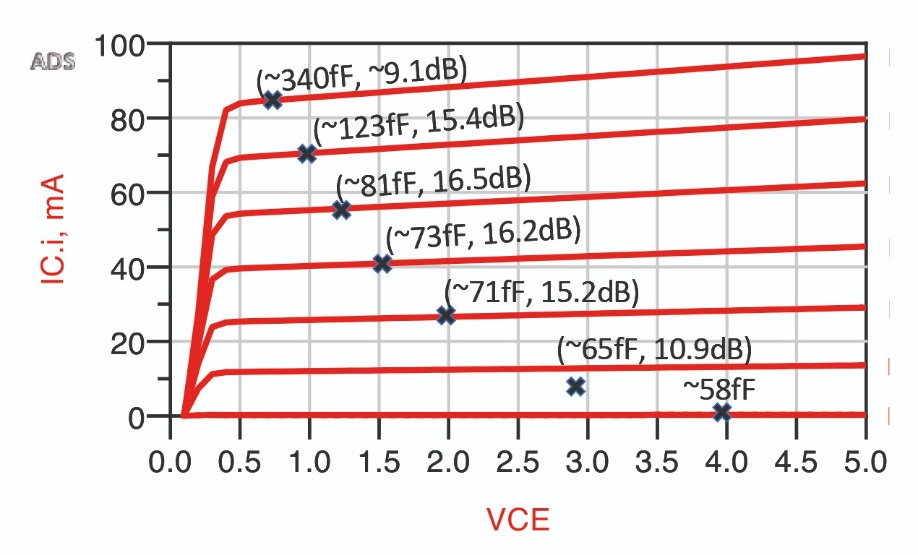 We produced our InP HBTs using our 0.25 μm process. The transistors that result have excellent RF figures-of-merit, including a cut-off frequency of around 350 GHz, a maximum oscillation frequency of 700 GHz, and an off-state collector-emitter breakdown voltage in excess of 4.5 V. For these devices, maximum available gain is 15-16 dB at 50 GHz, and output capacitance is just 1.87 fF/μm, easing tuning for transformation to a typical 50 W load (see Figure 2).

To evaluate the suitability of our InP technology for millimetre-wave power amplifiers, we have undertaken load-pull simulations. They involved simulating a single-stage amplifier, varying the load and source impedances, and, at each impedance pair, sweeping the RF input power and plotting the device response. Using this approach, we obtained values for output power, DC power, gain, and efficiency.

Our load-pull simulations indicate that our InP HBTs should produce an excellent peak PAE and associated RF output power across very wide bandwidths (see Figure 3). Note that the results that we report correspond to the fixed source and load impedance shown therein, which offered the best peak PAE across 24 GHz to 60 GHz, based on load and source-pull simulations. Great performance in this domain bodes well for millimetre-wave radar. 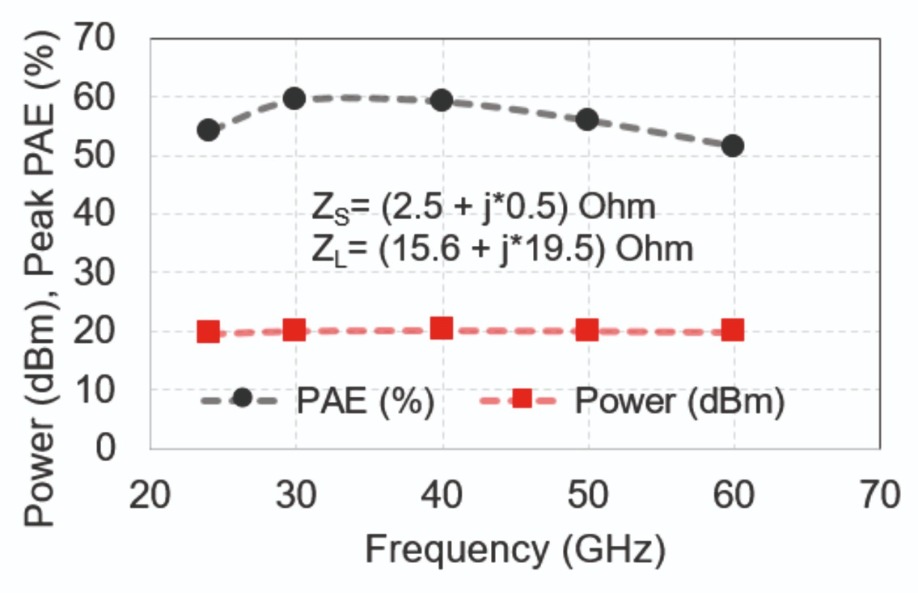 We have confirmed excellent power performance through load-pull measurements, performed on-wafer. Our use of a vector receiver-based load-pull system provides us with wave quantities at the input and output ports of the device. Measurements that we make include the reflected power at the input of the transistor. This enables accurate determination of both the device’s power gain and its input reflection coefficient. We recorded values of a 57 percent PAE and an output power of 60 mW, when operating the device with a collector-emitter voltage of 2.8 V, an associated current of 32 mA that corresponds to 2.13 mA μm-2, and optimum loading conditions (see Figure 4).

Based on our promising results, we selected this device, which is a common-emitter power cell with a total emitter periphery of 15 μm2, as the key building block for producing an amplifier operating in the Q-band. We targeted an RF output power of 100 mW, for frequencies of 45 GHz to 47 GHz. For this amplifier, we decided to use a device bias point of 3.2 mA μm-2, because this offers the best combination of output power and peak PAE. 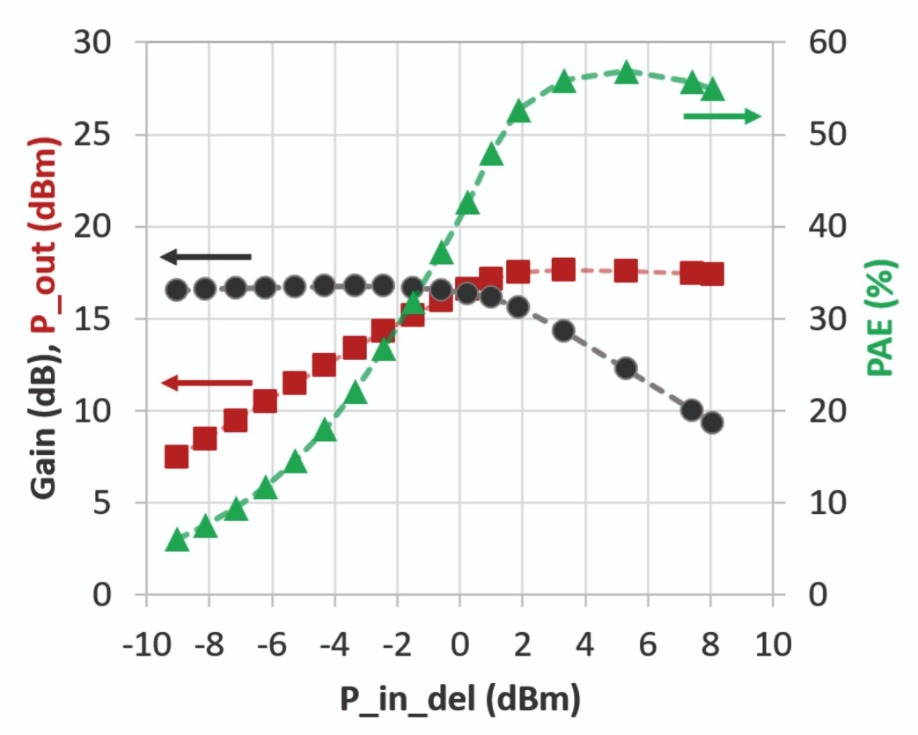 At each port, we used three transmission line sections with equal impedance ratios to transform the device’s optimum load and source impedance to the 50 W source and load. Values for load and source impedance were taken from load pull simulations at 45 GHz to 47 GHz. In this amplifier, we formed shunt capacitors by utilizing process design kit, metal-insulator-metal structures with dimensions below l/8 at 46 GHz. Note that we did not employ thin, excessively lossy lines, because capacitance can be absorbed in intermediate line sections.

One can see our implementation of meandered microstrip lines in an optical image of our chip, shown in Figure 5. It is very compact design, with an inner area of 276 x 600 μm2, which includes DC blocking and bypass capacitors. Including RF pads, the total area of our MMIC chip is 0.185 mm2.

To evaluate the RF performance of our chip, we have measured the S-parameters after performing probe-tip calibration. Results are similar to what Keysight ADS simulations predict (see Figure 6). The MMIC 3 dB bandwidth is 10 GHz, giving a fractional bandwidth of roughly 20 percent. 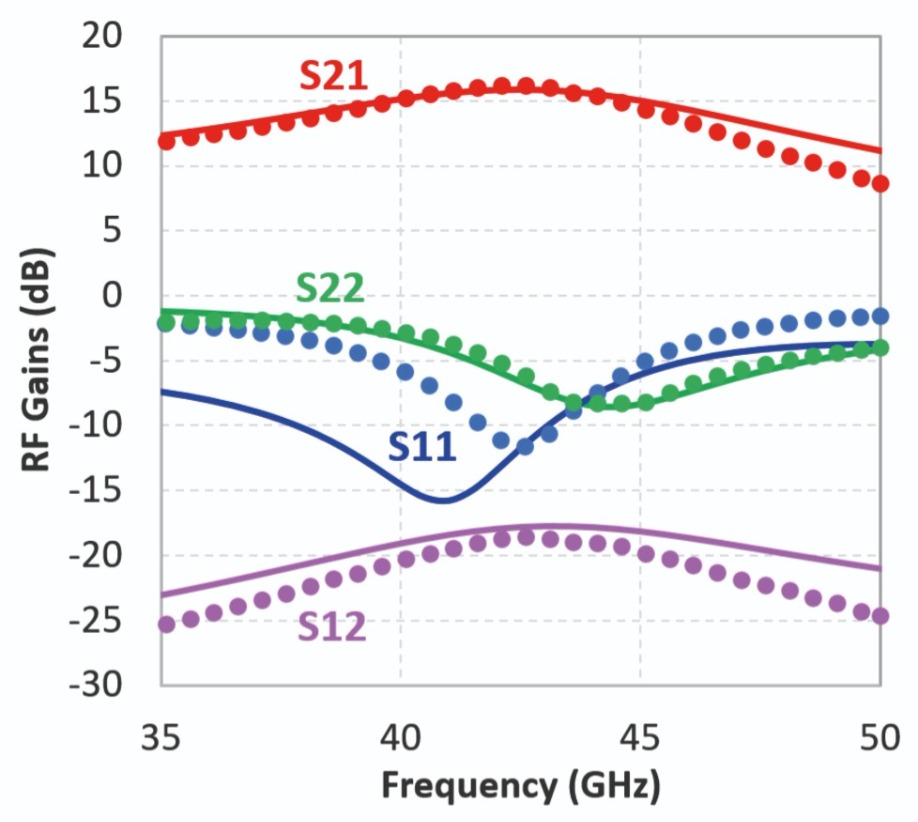 At 47 GHz, the frequency with the highest collector efficiency, the PAE is a record-breaking 46 percent, and the output power 119.7 mW. This is well above our 100 mW target, and if this chip were to be deployed in a phased-array radar, it would enable a 40 dBm effective isotropic radiated power for the 8-element array, given an antenna gain of 4 dBi, requiring 18 dBm per transmitter element. Note that at 47 GHz, the PAE reached is above 40 percent at the 1dB compression point, highlighting its high efficiency at back-off for applications where linearity is important, and thus power back-off from saturation is required. 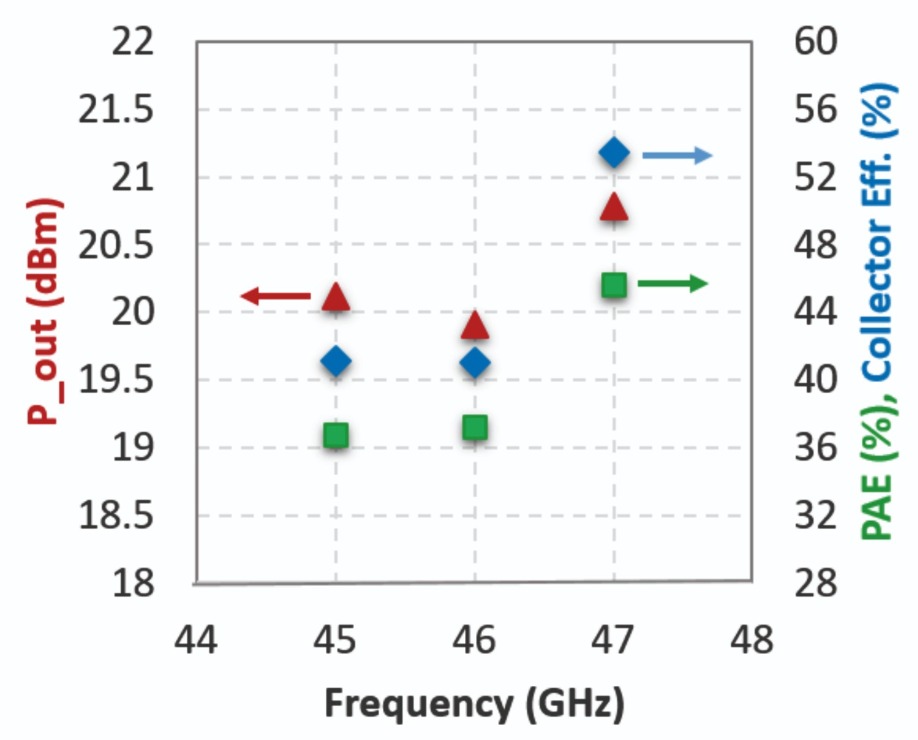 Benchmarking the performance of our Q-band MMIC against those made with other technologies, such as CMOS, SiGe, GaAs, and GaN, highlights the capabilities of our InP devices (see Table 1).

GaN, which is widely championed as by far the best material for making great RF devices, does deliver a high power, but compared to our InP MMIC, power gain is significantly lower and PAE slightly lower. Offering similar RF power levels to our chip is the SiGe HBT, but it operates at a lower efficiency.

For the key yardstick of chip power density per unit area (mW mm-2) – evaluated by dividing the saturated power by the total chip area – our work stands out amongst the various technologies, only bettered by GaN. Considering these results as a whole, it is clear that the InP MMIC, built with 0.25 μm HBT technology, has many RF attributes, making it a very strong contender for deployment in phased-array radar.